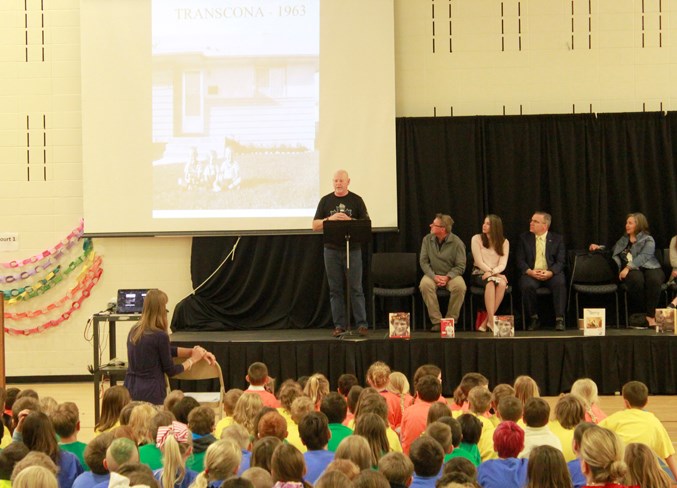 Fred Fox, the older brother of Terry Fox, was at École Edwards Elementary School June 1 to inspire students with his brother&#8217;s story. Fox said his brother was an average person who set a goal and worked hard, and told students they can also do remarkable things if they follow Terry Fox&#8217;s lead.

Students at École Edwards Elementary School filed into the school’s gymnasium wearing brightly coloured T-shirts June 1, to hear a presentation from Fred Fox. Fox – the older brother of Terry Fox – was in Airdrie on behalf of the Terry Fox Foundation to recognize Airdrie’s participation in Terry Fox Runs and kick off this year’s events. Fox’s visit to Airdrie was part of a short speaking tour at schools, rotary clubs and community events, which he said is an important way to keep Terry’s legacy alive. “Nine thousand schools in this country host Terry Fox runs – they’re raising money for cancer research, continuing Terry’s dream, and it’s so important,” he said. According to Fox, École Edwards was selected for the visit because it is one of the top fundraising schools in Alberta. The school displayed banners celebrating five, 10 and 15 years of participation in Terry Fox Runs near the stage on which Fox spoke. According to the Terry Fox Foundation, the school has hosted Terry Fox Runs since 2000 and has raised $75,520. That total is part of the $162,448 raised by all Airdrie schools through Terry Fox runs. Additionally, the Airdrie Community Run has been hosted since 1985, and has raised $227,825 for cancer research. Learning support teacher Michelle Cyrzan said the Terry Fox run is an important event at the school because of the numerous staff and students who have been affected by cancer. “It’s important to be able to support our Edwards family, our leaders and our learners, to make sure they feel supported and to raise money for such an important and valuable cause,” she said. From the stage, Fox showed pictures and shared recollections of his brother, stories of his tenacity and memories of the 1980 Marathon of Hope. Fox aimed to inspire the students with a simple message – Terry Fox was an average, ordinary student who set a goal and worked hard to accomplish it. “Terry realized at a very young age he wasn’t the tallest, he wasn’t the strongest, he wasn’t the smartest student, and he was going to work hard and he had to work hard,” Fox said. Fox then turned the message around on the students, saying they, too, could accomplish remarkable achievements with the same determination and hard work. “Anything is possible,” Fox said. “Terry said you don’t have to run across Canada to prove what you’re made of. Anything is possible if you try.” Fox said even though the students – and some of the teachers – he speaks to hadn’t been born when Terry Fox embarked on his Marathon of Hope 38 years ago, they continue his legacy and understand what he was trying to accomplish. “They know,” Fox said. “They understand what Terry did and they think of Terry as a hero. I think that’s their understanding of what he accomplished in 1980.” The 2018 Airdrie Terry Fox Community Run will take place Sept. 16. Runners can register online at terryfox.org