The Roxy Theatre, a favourite spot for first-dates and afternoon matinees in Airdrie, served its final bag of buttered popcorn on May 24, after a decision from head office was made to draw its curtains for good.
Jun 2, 2021 4:00 PM By: Carmen Cundy
Previous Next
Nicole and Alex Wall, former Roxy Theatre employees, are pictured in front of their 2019 wedding announcement displayed on the Roxy Theatre's marquee sign.
Expand

The Roxy Theatre, a favourite spot for first-dates and afternoon matinees in Airdrie, served its final bag of buttered popcorn on May 24, after a decision from head office was made to draw its curtains for good.

According to CEO of Landmark Cinemas Bill Walker, the Airdrie-based theatre was one of the corporation’s top locations for takeout and delivery orders during the COVID-19 pandemic. But even though many Airdronians continued to support the theatre in this way during its mandated closure, popcorn orders weren’t enough to keep the location afloat.

Walker said the 876-seat, two-screen theatre had been struggling since even before the COVID-19 pandemic hit.

“We’re sincerely appreciative of the support of the Airdrie community...it’s just difficult to compete with the theatre that we have in Country Hills with the recliners and certainly with Cross Iron Mills where the Cineplex theatre is,” he said. “So we found the business model for that theatre was no longer working the way we needed it to.”

Walker added that Airdrie’s only movie theatre was in a building lease that was set to expire at the end of May. He said rather than renew the lease and face potential losses, the Calgary-based cinema chain opted to close the theatre for good.

“Ultimately, coming out of the pandemic and trying to focus our resources and our capital and rebuilding as we come out of this, there’s a few locations that had to fall into the category where we just weren’t going to be reopening,” he said.

Walker added the decision for Landmark Cinemas to close “The Roxy” came quickly, and he acknowledged the loss of the venue will be felt across the community.

“It’s always tough to hear the stories of people’s first movie and first date,” he said. “[It] is tough because these theatres have been around for a long time and they’ve seen tens of thousands and hundreds of thousands of guests go through there and create memories and experiences that they really loved and look upon fondly.

“It’s difficult to hear that. But ultimately it’s just the nature of the business right now."

After news broke about the closure of The Roxy, Airdrie residents responded in droves on social media. One former employee said the theatre was the reason she met her husband and it holds a place “very near and dear” to her heart.

Nicole Wall started in concession sales at The Roxy in December 2007. She quickly moved to box office sales and was promoted to supervisor in 2009. Her now-husband Alex Wall worked at the theatre as a projectionist, and later as a supervisor.

“I always knew there would be the day that the Roxy Theatre would close, but it was still hard to hear the news,” she said. “I have to admit I was quite upset and tears were shed.

“The Roxy theatre is where our story started so I think it’s hard for me to accept that the place where we fell in love with each other will soon be replaced.” 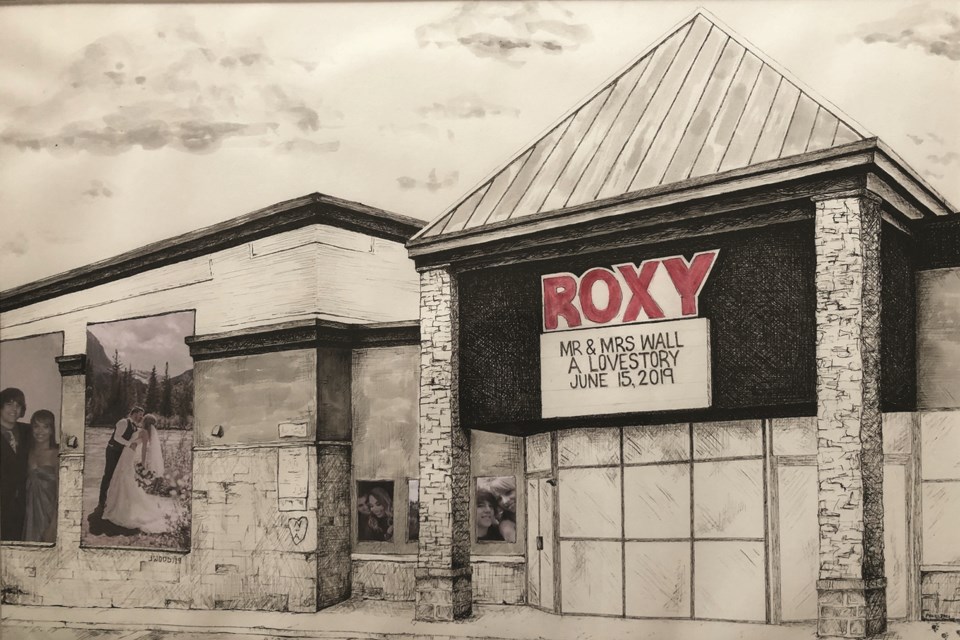 A close friend and bridesmaid at Nicole and Alex Wall's wedding sketched the Roxy as a wedding gift to commemorate their love story. Submitted/For Airdrie City VIew

During high school, Wall went to see a movie at The Roxy with some friends and when she saw Alex, she said knew she had to apply to work there so she could meet him. During her four years working at the theatre, she said they quickly became friends and started dating shortly afterwards.

“Alex and I created and shared so many fun memories during our time working there that we can thankfully cherish for many years to come,” she said. “But it’s bittersweet because we won’t be able to create new memories there.”

Wall added that her 2019 Canmore wedding had movie ticket style invites, a popcorn bar, and had the Roxy Theatre marquee sign share the date of the wedding.

“It’s been humbling to see the theatre as a reminder of how far Alex and I have come, both individually and as a couple during the past 14 years,” she said.

She said that while the closure of the theatre is felt strongly by her and her husband, she believes it will also be missed by many others in the community.

“The movies provided a chance for families and friends to gather for entertainment, to escape reality, and to celebrate birthdays and now we won’t have that available in our city,” she said. “Many residents who grew up in Airdrie are now raising their kids there and I’m sure the Roxy Theatre provided a sense of nostalgia to people.”

"I'm sad to hear of the closure," she said. "It wasn't the fanciest theatre, but working there I heard time and time again how nice it was to have a community theater in town that people could take their kids and grand kids to or have a quick date night without heading into Calgary.

"Despite the odd bad experience any of us who worked in customer service have, I felt supported by the community and by my coworkers while working there and I can't help but think it'll be difficult for Airdrie to recapture the community feeling the Roxy brought."

After hearing the news that The Roxy was closing, Wall said she and her husband had a tailgate pizza date outside of the theatre as a final farewell to the facility.

“Airdrie still has that small-town feel, but there aren’t many establishments left that we all grew up with, yet the Roxy Theatre was one place that we were still able to cherish,” she said.