In memory of local fallen soldiers, Veterans Boulevard will soon be lined with 40 white crosses remembering thanks to the annual Field of Honour campaign.
Oct 30, 2020 10:00 AM By: Jordan Stricker 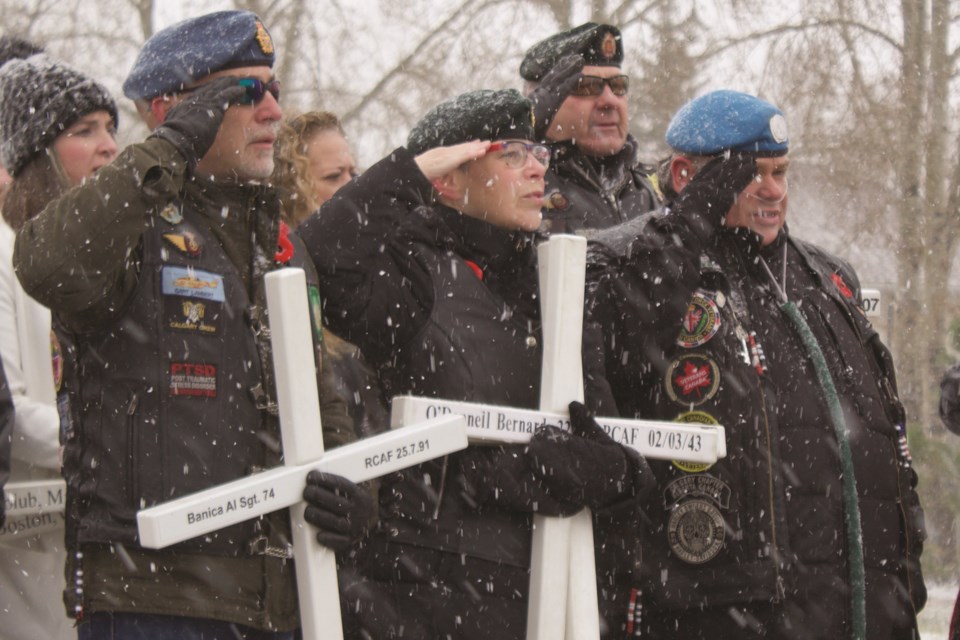 In memory of local fallen soldiers, Veterans Boulevard will soon be lined with 40 white crosses thanks to the annual Field of Honour campaign.

According to Allan Hunter, special advisor to the Veterans Association Food Bank board, 2020 is an especially important year for the Field of Honour campaign because Remembrance Day ceremonies have been disrupted by the COVID-19 pandemic (see story page X).

“This has grown into quite a significant thing,” Hunter said. “Hopefully, with not having Remembrance Day, people will take the time to go over, maybe take their kids and ponder what it means to serve the country."

The Field of Honour has been an annual occurrence in Airdrie since 2011. Hunter said the main goal is to honour soldiers who have passed away.

“I would encourage everybody to really show that they understand the price of freedom,” he said.

On Oct. 31 at 10:30 a.m., motorcycles will follow a police escort along a parade route around Airdrie, weather permitting. After completing the parade route, members of the Veterans Brotherhood of Canada, the Commandos Canada Motorcycle club and the public will meet in the Brewster’s parking lot for a ceremony where crosses will be erected in a grassy median along Veterans Boulevard. Hunter said each cross honours someone with ties to Airdrie who served the country.

“People have given their lives for freedom in this country,” Hunter said. “We are hoping people will come out and support.”

Hunter said the Field of Honour is also meant to shine a light on the challenges many veterans face after they complete their service.

“We just opened another [food bank] in Edmonton, which is tragic in itself because having food banks for our veterans is not something we should be proud of,” Hunter said. “We lost a young individual, 33-years-old, to suicide. He left a wife and two kids behind. It is absolutely heart-breaking we are still losing our veterans to things like suicide.”

Mayor Peter Brown and Banff-Airdrie MP Blake Richard will be in attendance. Brown said he has attended the event every year since its inception.

“With the situation we are all in with COVID-19, some of our freedoms have been limited and it just goes to show you the importance of those who have fought for us in the past,” Brown said. “Some of those names on Veterans Boulevard were neighbours; they lived in our community. It is absolutely imperative that we remember.”

According to Hunter, organizers are doing everything they can to ensure proper physical distancing is maintained at the event and masks will be provided to people who attend.

“We are asking everybody to pay attention to what Alberta Health Services is saying and do your part,” Hunter said.