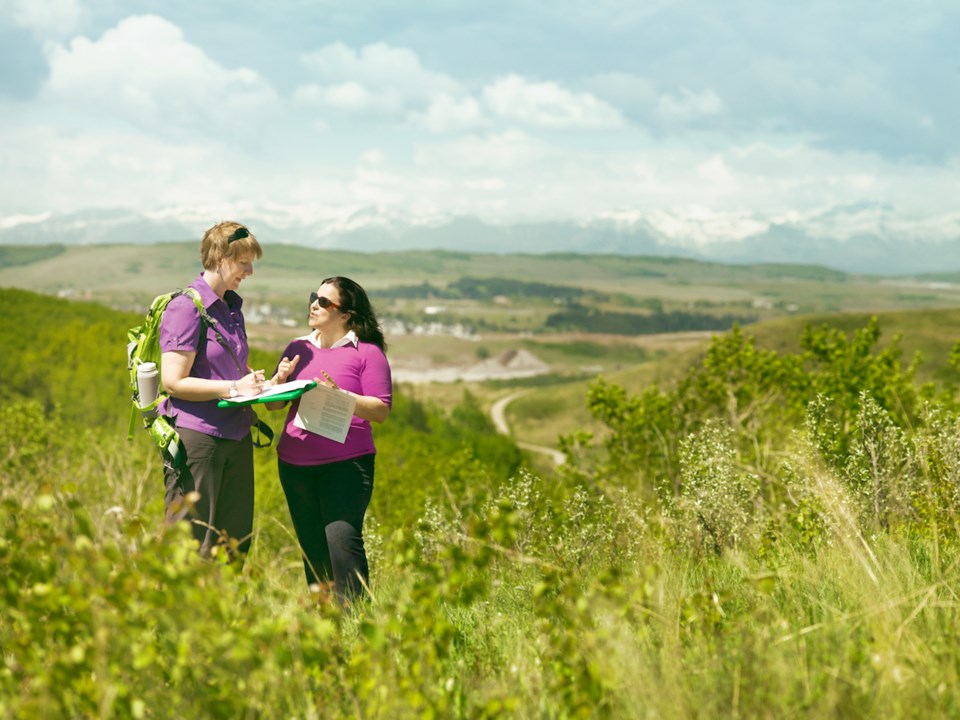 Sonya Jakubec, who will present a Park Talk June 18 at Glenbow Ranch Provincial Park, is pictured here with research assistant Alexis Cooper at the park. Photo courtesy of Roth and Ramberg Photography

The connection between nature and end-of-life care will be highlighted in an upcoming Park Talk presented June 18 by the Glenbow Ranch Park Foundation.

From 6:30 to 8:30 p.m. at the Cochrane Public Library, Sonya Jakubec will showcase her research on how well-being and grief link to parks and nature.

“The experience of being outside [is] calming and it allows for reflection and reminiscing,” she said. “It allows some personal feeling and sensation. Sometimes, [that] gets really dulled from medications or from the fatigue. The sensory aspect is really vital in connecting with nature and just being more open to new experiences.”

Her interest in the topic developed when she relocated to Alberta from British Columbia and began working with Alberta Environment and Parks in an effort to familiarize herself with her new surroundings. With a background in community nursing, she quickly developed an interest in helping the organization with a new parks access program.

“[I wanted to] see where I could support some of the discoveries that Alberta Parks was seeking,” Jakubec said. “Initially, the first kind of collection of studies we did, we were looking at adults with disabilities – physical, developmental and all manners of disabilities – in inclusion into parks.”

As a professor for the School of Nursing and Midwifery at Mount Royal University (MRU) in Calgary, Jakubec has continued to conduct research examining how spending time outdoors can help palliative patients.

Individuals in long-term care often don’t have the chance to be outside, she said, instead spending most of their time inside the walls of hospitals, their homes or care facilities. According to Jakubec, nature offers a sense of belonging and security that is much-needed for many patients.

“It’s a loss of home,” she said. “It's like a part of the environmental mourning that people are experiencing, and you lose your sense of home when you don't get to be outside of the physical-structured home.”

Nature also brings back good memories and experiences, Jakubec said. Individuals in long-term care often miss participating in outdoor activities, such as camping and hiking – a common theme Jakubec said she heard throughout her research interviews. While palliative patients are unable to do most of these activities, she said even just a few minutes spent outside can work wonders for an individual’s mental health.

“One of the fellows that we interviewed, all he wanted was to eat outside [because he said] food tastes better outside,” she said. “He wasn't comfortable [or] able to do a lot of travelling, but he just wanted to eat outside.”

At the Park Talk, Jakubec will also be presenting a mini-documentary released in 2018, called Peace in the Parks, which captures her work with MRU and Alberta Environment and Parks. The documentary features some of the interviews she conducted with patients about their love of and connection to nature.

“Pilgrimage, Sanctuary and the Place of Parks and Nature at End of Life” is free for anyone to attend. According to Jakubec, the public is invited to participate in dialogue and discussion about the topic at the event, as well.

“This is an opportunity to share and inspire, and to think as a community about some ways to take up ideas and to support them together,” she said.