For the first time, residents of Airdrie will have an opportunity to help decide the winners of the Airdrie Business Awards. On Sept. 8, the Airdrie Chamber of Commerce (ACC) named the finalists in seven categories.
Sep 15, 2020 5:45 PM By: Ben Sherick 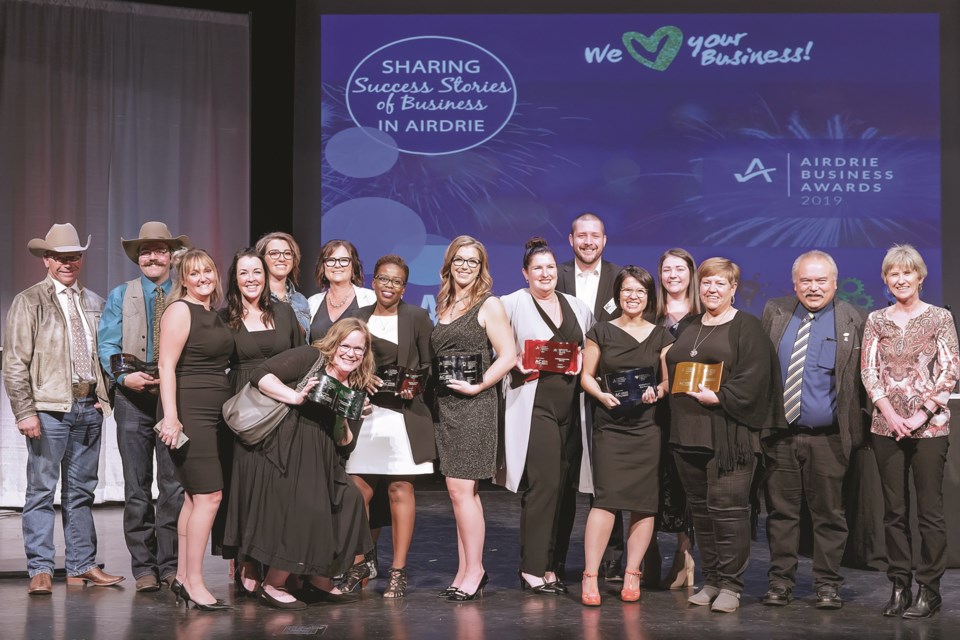 Winners of the 2019 Airdrie Business Awards were recognized during a gala at Bert Church LIVE Theatre. This year, the community can help decide the winners of the awards. File photo/For Airdrie City View

For the first time, residents of Airdrie will have an opportunity to help decide the winners of the Airdrie Business Awards.

On Sept. 8, the Airdrie Chamber of Commerce (ACC) named the finalists in seven categories.

“It’s obviously telling that these businesses have worked extra hard this year to continue to stay afloat and to pivot and to get through challenging times,” said ACC Executive Director Marilyne Aalhus. “None of these names that are finalists are a surprise. They’re all champions and leaders in our community and have all done amazing work to not only run a business but also to support our community at large.”

Nominations for the Airdrie Business Awards opened in June and ran until July 31. According to Aalhus, the community nominated 120 local businesses, and a third-party adjudicator whittled the list down to 36 finalists.

Six individuals are up for the Business Leader Award, Aalhus said, while five businesses will vie for awards in each of the other six categories.

“There was a tie in the Business Leader category which brought us to six [finalists],” Aalhus said.

In the past, the awards were completely decided by a third party. This year, Aalhus said, the adjudicators’ scores comprise 50 per cent of the vote and the community can also vote on who it thinks deserves to win in each category.

“We felt our business community is important to our community at large, and this gave the average population – the general consumer – a chance to weigh in on the businesses they love in our community,” she said.

Community voting opened Sept. 8 and will take place until Oct. 9. As of Sept. 11, more than 800 votes had been cast by the public, Aalhus said.

“That just goes to show how engaged the community is right now in this process,” she said.

The list of finalists can be seen and voted for at airdriechamber.ab.ca

After some uncertainty about the possibility of offering an in-person awards ceremony, ACC has also decided to go ahead with an event at Bert Church LIVE Theatre on Oct. 3, Aalhus said.

“We surveyed [the nominees] to ask them if they would be interested in an online or an in-person event,” she said. “Not a single person responded saying they wanted them online.”

While the awards show has been open to the public in the past, this year ACC will hold a closed event with only sponsors, finalists and their guests in attendance. Aalhus said the event is also being staggered to limit the number of attendees at any given time.

“Not all of the award categories will be awarded at the same time," she said. "We’ll be splitting the evening between three and our categories.”

A video will also be prepared to celebrate all the finalists, she added.