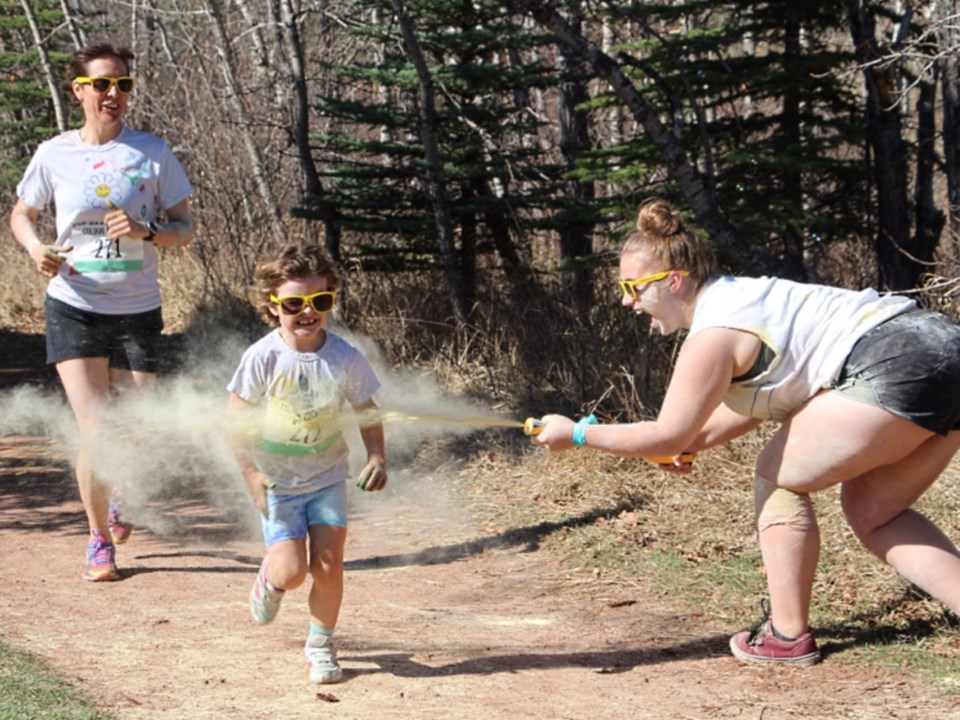 A five-kilometre colour run in Cochrane is back for its second year May 11. The event, Time for Hope Colours Run, is completely led by students from Bow Valley High School.

According to the student organizers, last year, the run drew more than 200 participants, with the proceeds from registration and additional fundraising supporting youth mental health initiatives within the community. The students managed to raise around $5,000 for the cause, much of which was donated to the local Boys and Girls Club.

“Every kilometre, we have a colour station with volunteers that will throw the coloured powder [on participants],” said Grade-11 student Marilee Udsen. “So, you get a white T-shirt and you get to do a nice run on a nice day through Cochrane.”

Udsen is part of the student leadership team that plans and organizes the event. She said this year, the group has decided proceeds will go toward the Cochrane Pregnancy Care Centre – just in time for Mother’s Day.

“We wanted to stay in the same vein of mental health,” Udsen said. “We decided that we would really like to focus on Mother's Day, since the race is on that weekend this year.”

Although it is only the second year the school has hosted the colour run, Udsen said Bow Valley High School’s leadership team has been putting on various versions of the fundraiser for about 10 years.

“It's definitely evolved over the years,” she said. “After the response that we got last year from the colour run, we decided that it would be a really good thing to do annually.”

Being able to plan and organize an event like this build on the skills she’s learned from the leadership program, Udsen said.

“It's really helped me become a more responsible and aware individual in my everyday life. The stuff that we learn helps us recognize different things in our day-to-day lives,” she said. “It’s really just made me a more well-rounded individual.”

Udsen added she has become more aware of recognizing people in need, on top of learning about planning and time management. She said it has also been a good experience to get involved with something that is shared with her community.

“The focus of it really is to give back to the greater community and to share our leadership program outside of the school walls,” Udsen said.

According to Udsen, the event will include food trucks, along with a silent auction. Organizers are expecting similar numbers or more as their inaugural year, she added.

Registration for the run closes May 8 and costs $30 for participants aged 10 and older, and $15 for those under 10. For more information, visit the event’s Facebook page.