With a project to restore Airdrie's first Municipal Historic Resource (MHR) now complete, the City is asking the public to submit photos of the landmark.
Jul 16, 2020 10:00 AM By: Kate F. Mackenzie 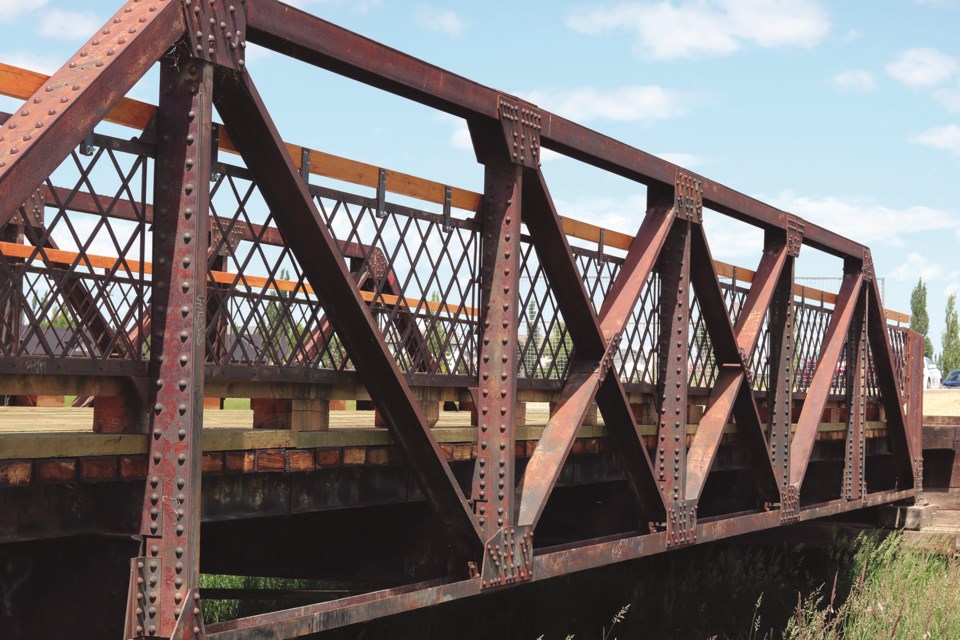 The Nose Creek Bridge to the elevators was built in 1928 and helped local farmers get their grain to market. Photo by Kate F. Mackenzie.

With a project to restore Airdrie's first Municipal Historic Resource (MHR) now complete, the City is asking the public to submit photos of the landmark.

According to Michael Dougherty, team lead of Community Development, the City of Airdrie is asking residents to submit old photographs of the Nose Creek Bridge to the Elevators – constructed by the Dominion Bridge Company in 1928 – which was designated as Airdrie’s first MHR in July 2019.

"We just completed a restoration project on it...and thought that historic photos of the bridge would just enliven the story a bit," he said.

Dougherty said the submitted photos will be displayed on information boards that will be installed near the bridge, and will also be offered to the Nose Creek Valley Museum.

Historically, the bridge provided a path to the city's former grain elevators, he said, and signifies Airdrie's emergence as a prominent grain handling point from the 1920s on.

"Prior to it being built, farmers had to go...almost a mile out of the way and then a mile back, in order to get to the elevators," he said. "It allowed quicker access to the elevators and getting their grain on [the] market."

Later, in the 1960s, the bridge served as a "swimming spotter" for locals who took a dip in the reservoir below, Dougherty said.

More recently, a fire in  2015 damaged the wooden abutment at the south end of the bridge, causing it to be closed to pedestrians.

"We know that there has to be some pictures of that bridge through the time," Dougherty said. "We'd love just to see a timeline of how that bridge evolved in our community."

The recently-completed restoration project aimed to bring the bridge back to life and get the community using it, he said.

"It's going to be a part of the Trans Canada Trail, a pedestrian bridge and really a hallmark to our early history in Airdrie," he said.

Despite the bridge’s more than 90-year existence, Dougherty said he doesn't think many locals know about it. He called the steel pony truss bridge a "hidden gem."

"My girls call it ‘the bridge to nowhere,’ because it's this bridge in the middle of a field," Dougherty said. "But I think most Airdrie folks probably don't know the bridge is there or the history behind it, and we're really trying to get the story out there."

"These sorts of pieces take us right back to our roots, and...make us instill pride in who we are."