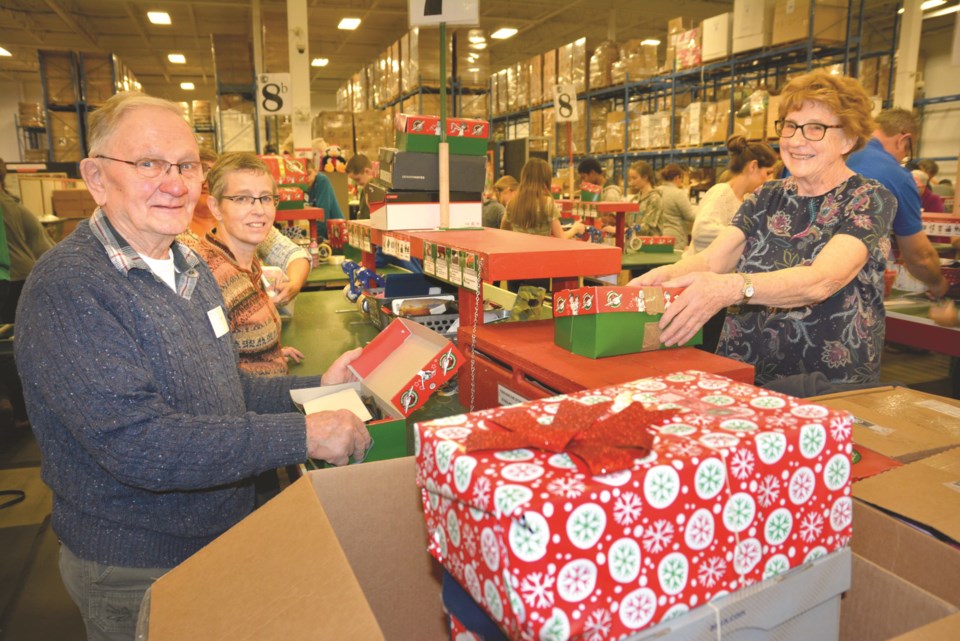 While Christmas is still 54 days away, many people have begun purchasing gifts for children they may never meet.

“What happens is, generous Canadians from coast to coast fill shoeboxes with school supplies, hygiene items and toys,” he said.

The shoeboxes are then dropped off at local collection points and transferred to processing centres, where volunteers inspect them to ensure they don’t contain anything that could harm a child or hold up the gift at customs, King said. They are then shipped to countries in Latin America and West Africa and distributed to children.

Last year, Canadians packed 517,000 shoeboxes. King could not say how many were packed locally, but noted Albertans contributed more than 113,000 to the total number.

According to a press release, “shoeboxes are given as unconditional gifts regardless of the child’s race, religion or gender.” One of the reasons the campaign is so exciting, according to King, is that sometimes, the shoeboxes are the first gift a child has ever received.

“Imagine that,” he said. “You’ve got children [whose] parents have almost nothing, they’ve never received a gift in their lives, and suddenly they go to an event and they’re given a box full of great stuff from people they’re almost certainly never going to meet, from a country they may not have even heard of.”

The shoeboxes are a source of joy and hope for the children, he said, and can impact their lives by supplying them with schools supplies that may be too costly for their families to purchase.

“For some families in the developing world, that alone means their kids do not go to school – they miss out on a life of education and they’re trapped where they are,” King said. “When folks put in things like pencils, paper, erasers, pens, rulers, that sort of thing… in many cases, it opens the door to kids being able to join their friends at school.”

In addition to school supplies, shoeboxes may be packed with crafts, toys, and non-liquid hygiene items.

Some items can’t be packed in the shoeboxes, King noted – toothpaste, which may open and ruin the box’s contents; items with a military look like toy guns, as boxes are sometimes sent to countries that have experienced conflict; and playing cards, as children’s families may have suffered from gambling addictions. Foods, liquids, medications and items that may break are also not allowed.

He said pictures and notes are encouraged, and a $10 donation per box is suggested – but not required – to help cover shipping and other program costs.

“If folks don’t have time to go out and pack shoeboxes, they can actually do it online,” he added. “If you go to packabox.ca, we try to echo the whole shoebox-packing experience by doing it online.”

The distinctive red and green shoeboxes can be picked up at collection points, King said, but he encourages people to request the shoeboxes online – free of charge from samaritanspurse.ca/occ, where more information about Operation Christmas Child is located.

National Collection Week runs Nov. 18 to 24. According to King, this allows ample opportunity to buy for and pack shoeboxes, and also provides volunteers plenty of time to collect and install the boxes.

Anyone packing a shoebox in the Crossfield, Beiseker or Irricana areas can drop off the gift at Carmens Bigway Foods in Crossfield, or at the drop-offs in Airdrie.

Residents in Chestermere, Langdon, and southeast Rocky View will have to drive directly to the Calgary processing centre at 20 Hopewell Way N.E.

“There are extra opportunities for folks in Airdrie and Rocky View County and other surrounding communities around Calgary that, after Nov. 24, they can bring their shoeboxes right to our Calgary processing centre,” King said. “They can bring them basically right up until about mid-December, in fact.”

Groups can also volunteer to work a shift at the processing centre in Calgary, inspecting shoeboxes and packing them in cartons for shipment. While many volunteer shifts are already full, King said a handful remain, and information about volunteering can be found on the website.