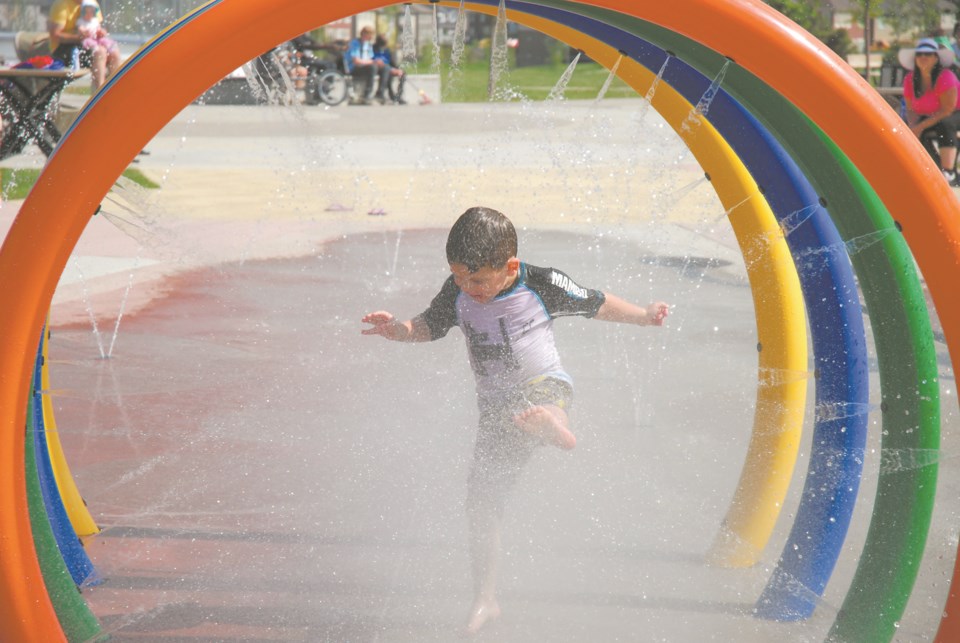 The Chinook Winds Regional Spray Park is officially open for summer and, as weather improves, residents can expect it to be a busy spot in Airdrie. File Photo/Rocky View Publishing

The opening of Chinook Winds Spray Park occurred May 31, but it was unlikely anyone was running out to take advantage of it with low air quality warnings across the province.

“I've had a lot of people inquire already when we're opening because they're anxious to get in there,” she said.

Located at Chinook Winds Regional Park, the spray park features water toys, a blaster spiral, ground sprays, slides and an interactive piano that plays music while spraying water. The features are set to time out automatically, but users can easily re-activate them by the push of a button. The fenced-in splash park also has washrooms, change rooms and a number of picnic tables.

Sargeant said the park could become a particularly popular spot throughout the summer, especially on extremely hot days.

“There's even times where I’ve questioned if we're over capacity. It's pretty busy up there, especially on those 30-degree days,” she said. “Come July and August, it's usually busy all the time. We have a lot of daycares that come up here in buses first thing in the morning. June isn't quite as bad until the all the kids get out of school.”

She said residents can take advantage of the park by being prepared and planning ahead – bringing towels, sunscreen, swim diapers (required for children who are not potty trained) and water shoes will help make the visit an enjoyable one. She also warned it could be challenging to find a parking spot on busy days, so park-goers should be prepared to walk.

“We don't have a lot of parking up top, so it's usually a good idea to park in the lower parking lot by the ball diamond to avoid all the congestion, because there's only one way in and out,” Sargeant said.

Like any public park, she said, there are rules – no pets, skateboards or rollerblades are allowed in the spray park. Food, however, is welcome inside the park in the picnic-table area, but not on or near the splash pad. According the City’s website, a concession is open on site daily throughout July and August – weather permitting – from 11 a.m. to 7:30 p.m.

The most important thing, Sargeant said, is that parents to keep a close eye on their children.

“We don't have lifeguards on site,” she said. “So, it is under the expectation that parents accompany their children.”

The park is open daily from 10 a.m. to 8 p.m. – weather permitting – and is expected to close for the season at the end of August. Sargeant said the City will notify residents of any changes to the park or its schedule on Airdrie’s Twitter and Facebook pages.