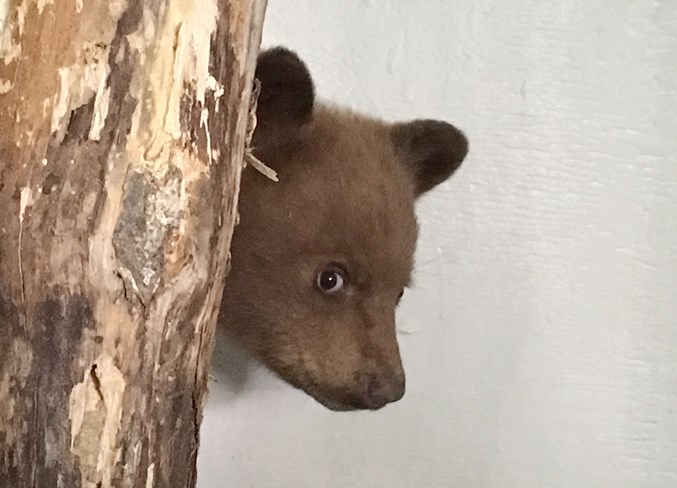 Charlie – an orphaned black bear cub in the care of the Cochrane Ecological Institute – peeks his head out from behind wood in his enclosure. Charlie is the first cub to be cared for by CEI since the province announced a new black bear rehabilitation policy.

After a recent change to provincial policy, the Cochrane Ecological Institute (CEI) was able to begin caring for an orphaned black bear cub named Charlie.

“Charlie came to us May 24, and he was found by some random campers in the Coleman area,” said Lisa Dahlseide, CEI’s education director. “They had waited for quite some time to see if a mom would come by, and no mother came by.”

The province announced April 18 approved wildlife rehabilitation facilities in Alberta would be able to work with Alberta Fish and Wildlife staff to rehabilitate black bear cubs less than one year old.

The new policy marked a change in the province’s approach to bears. According to Dahlseide, a previous policy – enacted in 2010 – was based on the opinion that certain species pose a risk to human safety if rehabilitated, despite evidence to the contrary. Black bears were one of many animals on a list of banned species, which still includes grizzly bears, coyotes, cougars, wolves and adult ungulates like moose and elk.

Now that black bears have been taken off that list, Dahlseide said, CEI is working to feed Charlie and get him accustomed to the outdoors. In addition to milk, Charlie feeds on dandelions and spruce tips, and has limited human contact.

“Because of (Charlie) being bottle-fed, he’s in a nursery-type environment,” Dahlseide said. “To reduce human contact, he just has two people he actually sees and deals with.”

Dahlseide said Charlie has recently started taking milk from a bowl, meaning he’ll soon be ready to move to a two-side outdoor enclosure and cease human contact. He’ll start in a smaller enclosure about a half-acre in size to acclimate him to the outdoors. As he grows, the second side of the enclosure will be opened, leading to another four acres. The outdoor enclosure features native vegetation for Charlie to eat and trees to climb.

“As per the Alberta Environment and Parks protocol, all of the enclosures have a water feature, so he’s got a big pond in there and another little swimming area,” Dahlseide said.

According to Dahlseide, bears are ideally rehabbed for at least one winter before being released during hibernation in the second winter, but the new bear rehabilitation protocol mandates an Oct. 15 release date. Dahlseide said that date is too early, because Charlie will still be a baby.

“Black bears stay with their moms for two to three years,” Dahlseide said. “Releasing him that early, his first hibernation being by himself, it’s not natural.”

Dahlseide said a further concern is the release date falls right in the middle of Alberta’s fall bear hunt. The goal of rehabilitation is to get the animal bigger and fatter than its age class, so it has a greater chance of success upon release.

“If we’re releasing an eight-month-old cub, it’s going to look like an adult,” Dahlseide said. “We’re releasing him in the middle of the hunting season. It’s not ethical. These hunters are going to think he’s an adult, and they could just shoot him, then.”

CEI will gather science to show the date is not appropriate, Dahlseide said, with the hope Alberta Environment and Parks will be flexible.

CEI has already negotiated the ability to rehab moose, another of the province’s banned species. Sam, an orphaned moose who has been in CEI's care since May 26, is currently being fed goat milk along with brush and leaves. He’ll eventually be released into a large outdoor enclosure, Dahlseide said, where he’ll be kept for a full year before being released next spring. She added CEI hopes the province completely lifts the ban on large mammals so each individual has a chance at rehab and success in the wild.