The Alberta Institute for Wildlife Conservation (AIWC) is urging well-intentioned individuals to consult its wildlife hotline before aiding lonesome baby does this summer.
Jun 15, 2020 7:00 AM By: Kate F. Mackenzie 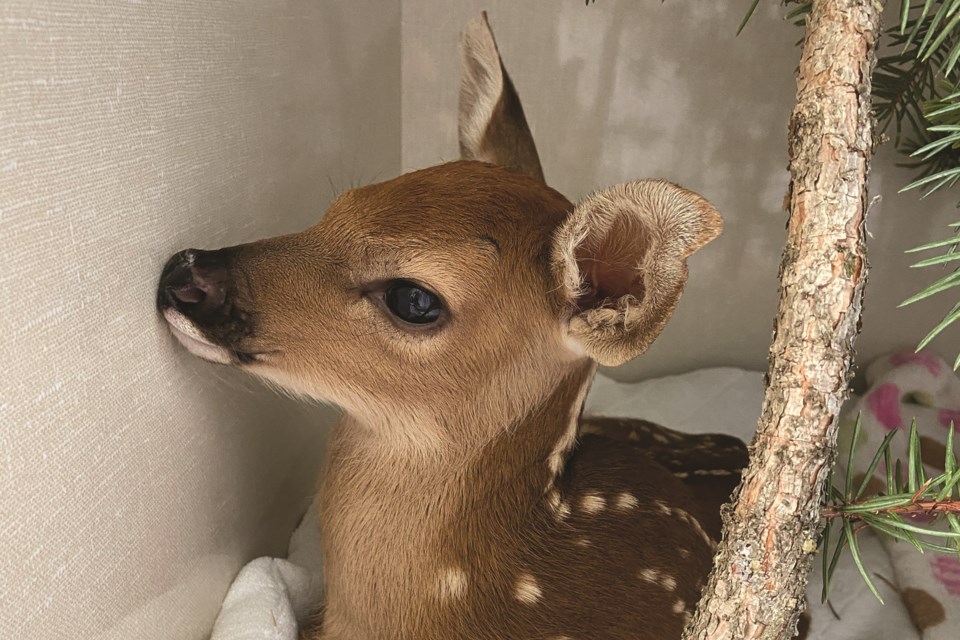 Fawns are born without a scent so predators are less likely to find them. Photo Submitted/Airdrie City View

The Alberta Institute for Wildlife Conservation (AIWC) is urging well-intentioned individuals to consult its wildlife hotline before aiding lonesome baby does this summer.

According to AIWC Executive Director Holly Lillie, although fawns may appear abandoned, often this is not the case. Fawns are one of a few animals born without a scent. To protect them from predators, their mothers – who have a strong odour – will leave fawns alone for up to six hours. Fawns should be left where they're found unless they're directly in harm's way.

In these cases, intervening is akin to kidnapping, she said. Instead of immediately taking the fawn to a wildlife center like AIWC – a veterinary clinic located northwest of Airdrie near Madden that specializes in rehabilitating injured and orphaned animals – Lillie suggests calling the hospital's hotline first at 403-946-2361. This way, AIWC can determine if the fawn truly is an orphan.

Lillie said the institute may ask, for example, if the mother deer was hit by a car and the fawn was found nearby.

"We also check the health of the fawn [to] see if they're dehydrated or in poor body condition,” she said. “Things like that will indicate their mom hasn't been around for a while to see them."

AIWC tries to prevent animals from coming into its care if it's not actually necessary, Lillie said. If an animal is admitted to AIWC’s care and there are no signs of injuries or trauma – confirmed via x-rays – they are returned to where they were found, provided it is safe to do so.

Lillie said it's a common myth that fawn will be rejected by their mothers if they're carrying a human scent. The main reason human scent should be removed from a fawn, she said, is to avoid attracting predators like coyotes, wolves or domestic dogs. This can be achieved by gently rubbing the fawn with grass.

On average, Lillie said, AIWC receives five to eight fawns per year. The first fawn of the 2020 season was recently admitted after it was mistaken for an orphan. Luckily, the baby was successfully reunited with her mother.

Lillie added that the institute is getting busier in general, with more than 70 animals admitted the last week of May, and more than 50 the first week of June.