Benefit concert to be held for Humboldt crash survivor

Airdrie’s Genesis Place Recreation Centre will be the site for a benefit concert June 16, hosted to raise money for Ryan Straschnitzki's recovery.
Jun 7, 2018 12:01 AM By: Airdrie City View 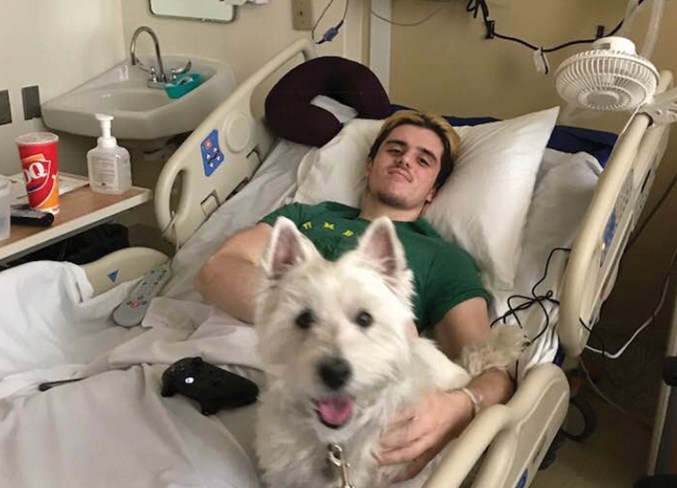 Ryan Straschnitzki was transferred from Calgary&#8217;s Foothills Medical Centre to Philadelphia&#8217;s Shriners Hospital for Children on May 30. A benefit concert at Genesis Place Recreation Centre June 16 will help raise money for his family.

Airdrie’s Genesis Place Recreation Centre will be the site for a benefit concert June 16, hosted to raise money for Ryan Straschnitzki's recovery. Straschnitzki, 19, was paralyzed from the chest down in the April bus crash that claimed the lives of 16 of his Humboldt Broncos teammates. He was recently transferred to Philadelphia for special treatment at the Shriners Hospital for Children. Straschnitzki won’t be able to make the concert, but Cody Thompson, Straschnitzki’s strength coach and part of the StrazStrong Committee, said he hopes the residents of Airdrie can. “This is something that Airdrie has never really done before,” Thompson said. “So, if we could get 1,700 people out, that’s going to make a huge difference, financially, in Ryan’s recovery.” After the vigil for the Humboldt victims held in Airdrie in April, the StrazStrong Committee realized it could likely pull a big crowd for something fun, Thomspon said. The committee acquired Genesis Place as a venue – where other organizations vacated to allow the event to occur – and Thompson went on Calgary radio station CJAY 92 to promote the event. CJAY offered to sponsor the concert, and pulled in big names to help. “Ryan is a pretty easy kid to get behind, with everything that he’s facing and how he’s handling it,” Thompson said. “I think it’s an easy thing to support and feel good about supporting.” Now sponsored by CJAY, the concert will be headlined by the band Monster Truck, with additional performances from Matt Blais, Smitty Kingston – who wrote the song Humboldt Strong – and others. Two former Guns 'N’ Roses guitarists, Ron “Bumblefoot” Thal and Gilby Clarke, also happened to be in town and asked to jam with the current lineup, Thomspon said. He added some of Straschnitzki’s Humboldt Broncos teammates will be in attendance, including Derek Patter, Graysen Cameron and Nick Shumlanski. “We’re not putting this on for people to come to something where we’re mourning anything, where there’s sadness,” said Thompson. “This is actually going to be a celebration, which we haven’t really had a chance to do. Ryan’s still with us, and he’s recovering really well.” There will also be a silent auction, selling goal pucks from Alex Ovechkin, NHL fan packages and tickets. Food, a “cheap bar” and one-of-a-kind #StrazStrong apparel will also be available, according to Thompson. Tickets are $75 dollars. To find more information or buy tickets, visit strazstrong.com