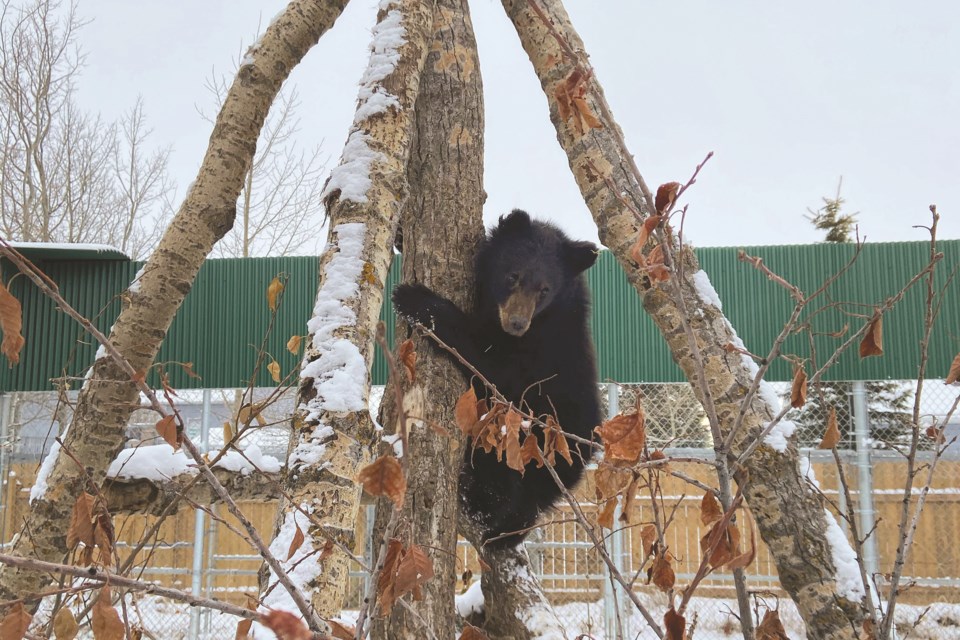 A black bear cub that was discovered severely emaciated north of Edmonton is spending the winter in the care of the Alberta Institute for Wildlife Conservation. Photo Submitted

The Alberta Institute for Wildlife Conservation (AIWC) – an animal hospital located northwest of Airdrie – will keep a black bear in its care over the winter while it continues to undergo rehabilitation.

The male cub was admitted into AIWC’s care on Dec. 3, 2019, executive director Holly Lillie said, after being found in poor shape north of Edmonton near Valleyview.

“He was spotted to be severely underweight, and it looked like he had trauma to his hind and or pelvis,” she said. “He got to the point where he was so severely emaciated that he was dragging his back end, so he was not able to function as well anymore.”

The bear weighed only 25 pounds, she added, well under the 65 pounds a healthy cub would normally weigh at that point in its development.

Due to the cub’s condition, AIWC suspects it was likely orphaned, which Lillie said would explain why it was not thriving in the wild and did not have the fat reserves to begin hibernating. Normally, black bears would go into hibernation in mid-October.

The hospital conducted a full examination of the cub and found it had not suffered any fractured bones.

AIWC’s priority has been getting the bear up to a healthy weight, and Lillie said, so far, it’s done well by doubling its weight. The bear is housed in an outdoor enclosure with minimal human contact, and is monitored by video camera. The cub is subsisting on a diet of natural produce and vegetation.

“We’re really hands off at this point,” she said. “Our job is to provide him with the necessities of life and make sure that he’s doing well.”

This is the second black bear cub that has to come into AIWC’s care since changes to provincial legislation in April 2018 made it possible for wildlife rehabilitation agencies to care for the young animals. Lillie said a female cub was admitted to AIWC in June 2019 and returned to the wild in October of that year, and has since gone into hibernation.

The male cub will be the first to spend the winter in the group’s care, and Lillie said the organization is using it as an opportunity to further its knowledge on how best to rehabilitate the animals. AIWC’s staff has consulted with other conservation groups for recommendations on tending to the animal, Lillie said, and will continue to build the facility's capacity to provide care in these instances.

The cub will not fully hibernate this year, Lillie said, but does sleep sporadically for days.

“Our plan is that we’ll continue to care for him, and then he’ll get released – most likely in April, depending on the weather,” she said.

Next year, the cub should be fully rehabilitated and able to hibernate normally when the time comes. Before the cub is released, Lillie said, Alberta Environment and Parks will collar the bear so it can be monitored in the wild.

Care for a mammal like this cub can be costly, Lillie said, but AIWC has, to date, managed to rehabilitate the animal without straining the institute's limited resources. She noted that the public can help AIWC shoulder the cost by making a donation at aiwc.ca, or to donate needed items from a “wish list” the posted on its website.