As spring brings a new generation of wildlife, the Alberta Institute for Wildlife Conservation (AIWC) hopes to impress upon the public the message, “If you see a baby hare, leave it there.”
Apr 20, 2020 12:00 PM By: Ben Sherick 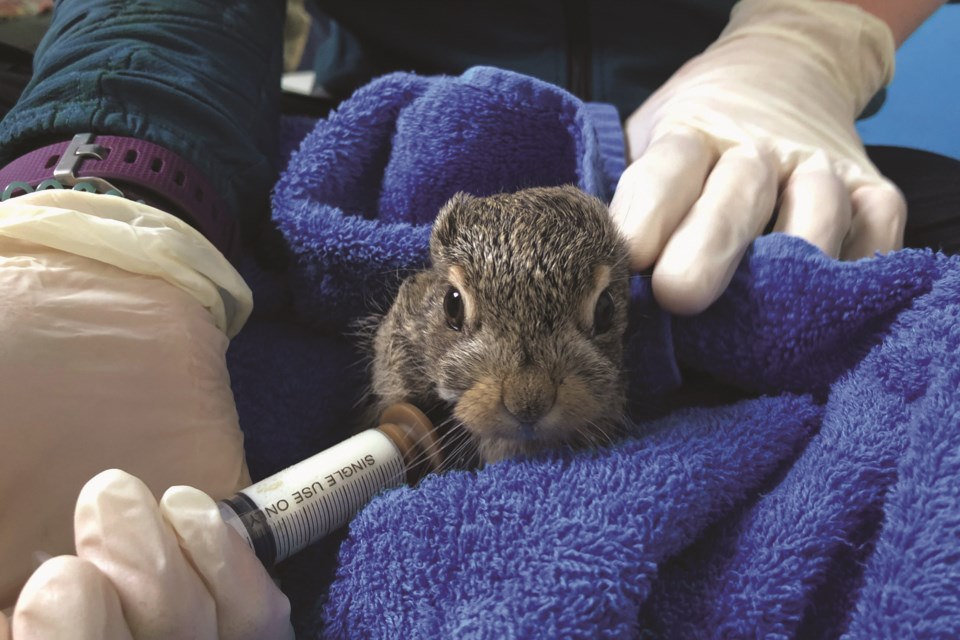 As baby hares begin their lives, the Alberta Institute for Wildlife Conservation is urging the public not to inadvertently separate them from their mothers. Photo Submitted/For Airdrie City View

As spring brings a new generation of wildlife, the Alberta Institute for Wildlife Conservation (AIWC) hopes to impress upon the public the message, “If you see a baby hare, leave it there.”

“Baby hares are being born. We received our first baby hare [April 8], and that signals that we will be receiving many more over the coming weeks,” said Holly Lillie, executive director of the wildlife hospital which is located northwest of Airdrie near Madden.

That first baby hare arrived early, Lillie said. In 2019, AIWC received its first baby hare May 1. That year, the animal hospital cared for 140 hares – primarily babies. That number is more than average, Lillie said, but she did not know what to attribute that increase to.

AIWC is particularly concerned about the public inadvertently kidnapping baby hares and separating them from their mothers, Lillie said. Hares, otherwise known as jackrabbits, are born without a scent and are precocial, which means they are born with their eyes open and they are fully furred. Because mother hares have a scent, they intentionally leave their offspring alone throughout the day so as not to attract predators.

“She’ll return a couple of times, usually at dusk and dawn, to feed them,” Lillie said. “The rest of the time, she will leave them. It’s normal that the baby hares will move around from where she was last with them – the mom can find them within a block of where she left them.”

“Unless the animal is truly orphaned or injured, intervention is actually a really bad thing to do,” she said.

This is for two reasons. First, once a baby hare is kidnapped, AIWC often doesn’t have enough information about where the animal is from and can therefore not reunite it with its mother.

“Worldwide, there’s a less than five per cent success rate for baby hares in captivity,” Lillie said. “The reason being that they are a prey species, and we still cannot mimic the mother’s milk or how they digest food as well as they can in the wild. They’re a very high-stress animal, because they are a prey species.”

Unfortunately, this means more often than not a baby hare that comes into AIWC’s care will end up dying.

“I understand why people want to do it,” Lillie said. “They see a baby animal and the animal is all alone, and they think the animal is orphaned or potentially there’s an injury. But if that’s not the case, then we really ask that they leave them alone.”

In most cases, Lillie said, injuries are easy to observe – trauma to the eyes, ears or blood on the fur are good indicators that the baby hare is truly in distress.

Determining if a hare is orphaned is harder to decide, Lillie said, and even if a mother hare has been killed, baby hares are highly adaptive and still have a better chance at success in the wild than in captivity. If you’re unsure if an animal is truly orphaned or injured, Lillie recommends calling AIWC’s wildlife hotline at 403-946-2361.