The season for wildlife babies has come to Airdrie and area after a long winter and late spring – and the Alberta Institute for Wildlife Conservation (AIWC) is encouraging residents to avoid “kidnapping” newborn animals.
0
Jun 14, 2018 12:01 AM By: Ben Sherick 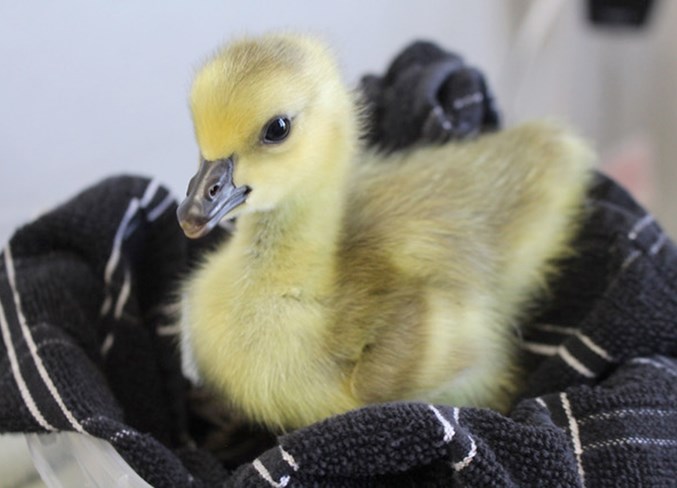 A gosling in the care of the Alberta Institute for Wildlife Conservation (AIWC). The institute is advising the public to not be &#8220;wildlife kidnappers&#8221; by ensuring any animal brought to AIWC is truly injured or orphaned.

The season for wildlife babies has come to Airdrie and area after a long winter and late spring – and the Alberta Institute for Wildlife Conservation (AIWC) is encouraging residents to avoid “kidnapping” newborn animals. Based on previous records, AIWC anticipates taking in more than 1,000 babies this year, and the institute hopes to ensure those admitted into its care are truly orphaned or injured. “A lot of animals are mistaken for orphans and, as a result, they’re needlessly separated from their parents,” said Holly Duvall, AIWC’s executive director. According to Duvall, AIWC refers to those animals as kidnapped babies. Usually, kidnapped babies come to AIWC because of well-intentioned members of the public, so she said AIWC is trying to educate residents about what a true orphaned or injured wildlife baby might look like. “Every situation is different, but there’s a couple of common things to know about baby wildlife and their natural behaviours that will hopefully help prevent more kidnapping,” Duvall said. According to AIWC, the young of many species of mammals are left alone while their mother forages. This also reduces the risk of the mother’s scent attracting predators to the babies. Newborn birds will stay in the nest full time until they develop enough to leave. It usually takes between seven and 10 days for a fledgling bird to learn to fly, during which time they will stay on the ground. Even so, a mother bird usually keeps a close eye on its young. Duvall said it’s best for newborns to be left alone whenever possible. “(Baby animals) do so much better out in the wild, in their natural habitat, raised by their natural parents,” she said. “They have a much better success rate going that route, as opposed to being brought into a wildlife centre.” AIWC will try to return an animal to its parents if possible, but Duvall said reuniting wildlife can be difficult if the baby’s original location is not known. When the institute is not able to return an animal, it will care for it like any other animal in the rehabilitation program. However, she said taking in a kidnapped baby diverts the institute’s resources away from the care of other animals. “As we see we’re getting more truly injured and orphaned wildlife, we really want to invest the money into their care,” Duvall said. Additionally, Duvall said there are some legal issues with removing some protected species, such as migratory birds. If an animal is obviously injured, or its mother is known to be dead, AIWC is prepared to care for the baby. Concerned citizens can look for signs of injury, obvious wounds, labored breathing or blood, Duvall added. “If the baby looks bright and alert, that’s a great indicator that there’s nothing wrong,” she said. However, she said, residents who come across a young animal in the middle of traffic may lend them a helping hand by getting them off the road. “Animals will not reject their young because of human scent, that’s an old tale,” Duvall said. “The only thing we would want to do, potentially, is rub the young down with some grass, and that will help remove the human scent. Human scent can attract predators.” If residents do encounter a baby animal and suspect it is injured or orphaned, Duvall said the best recourse is to phone AIWC’s wildlife hotline at 403-946-2351 for advice.