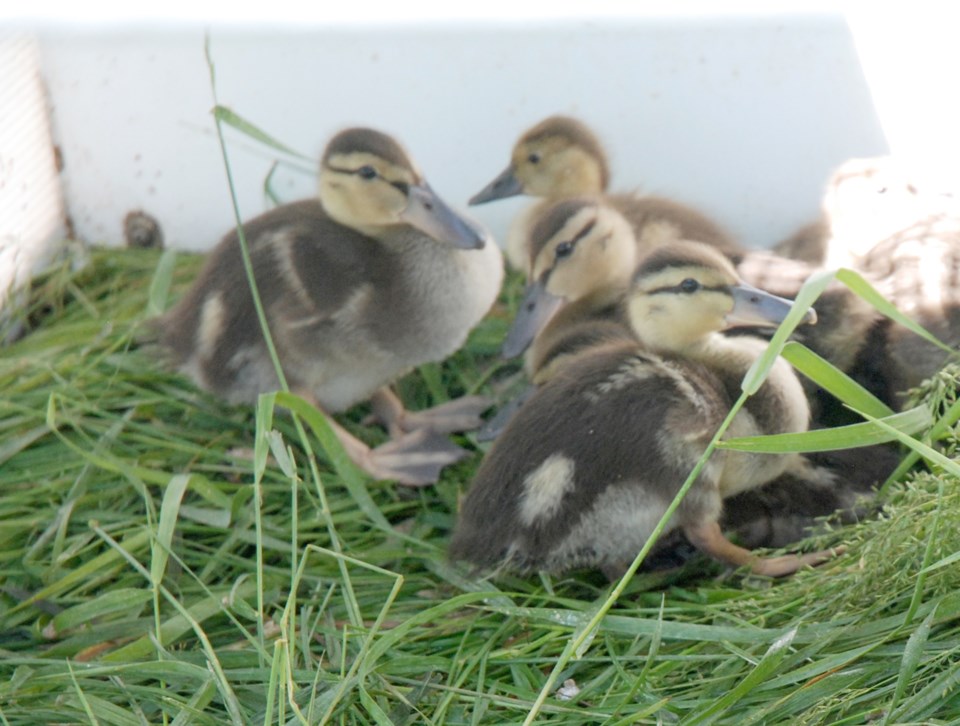 A group of mallards stick together in a specially-built duck box at the Alberta Institute for Wildlife Conservation (AIWC) in Madden. The little guys are just a few of the approximately 2,000 animals AIWC volunteers help each year. File Photo/Rocky View Publishing

The Alberta Institute for Wildlife Conservation (AIWC) is looking to plan ahead for what is typically an expensive spring and summer, with its eighth annual Wildlife Baby Shower – an online fundraising effort and an in-person collection of needed supplies.

AIWC has been providing rehabilitation of injured and orphaned wildlife since 1993. In 2018, the organization treated around 1,066 wild animals, with a large part of those efforts happening in the spring and summer.

“It's hugely important that we actually have the funds ready and available for when the baby animals do come in,” said Katrina Jansen, AIWC’s education and community engagement co-ordinator. “We're really happy with the way the fundraising has been going so far, and people have been so generous.”

On top of the online fundraising and in-person donations, AIWC will also be giving a series of talks throughout the spring and summer. Each month will showcase a different topic.

The first in the series is called Baby Boom, and will take place at the facility May 11. The talk will explore the admission of dozens of animals per day to the hospital, and will highlight some of the individual care staff and volunteers give to the animals.

“If people would like to come and see the hospital and actually learn a bit more about what we do, we're doing these onsite talks once per month,” Jansen said.

From May until August, AIWC’s wildlife hospital usually sees the majority of its patients; according to Jansen, the hospital can have upwards of 300 animals in its care throughout the spring and summer. She added the facility has already experienced a baby boom in the form of baby hares.

According to an AIWC press release, the facility’s costs can range from $100 to more than $1,000 per animal. Jansen said these expenses are associated with a number of factors that must be met in order for the hospital to rehabilitate wildlife.

“For instance, a baby bird that comes in will actually need feeding every 15 minutes from sunrise to sunset,” she said. “Last year, we went through roughly 40,000 mealworms per week during the baby-bird season.”

According to the AIWC website, more than 30,000 mealworms – enough to feed nestling and fledging songbirds – costs around $565 each week.

The organization has not yet met its $15,000 fundraising goal, Jansen said, but there are a number of ways people can contribute to the Wildlife Baby Shower efforts.

“We are happy to take donations in many different forms,” she said. “If people aren't comfortable giving us money through the online form, we can [accept] the cash donations at the hospital. We're also happy to take any items on our wish list, as well.”

AIWC’s updated wish list can be found on the organization’s website by clicking on the ‘Support us’ tab and navigating to the ‘Wishlist.’ People are also encouraged to make cash donations online to support AIWC’s efforts.

Tickets to the monthy talks are available for $15 per person on the website under 'upcoming events.' Directions to the facility's location can also be found on the site.