Airdrie will pause to remember at annual ceremony 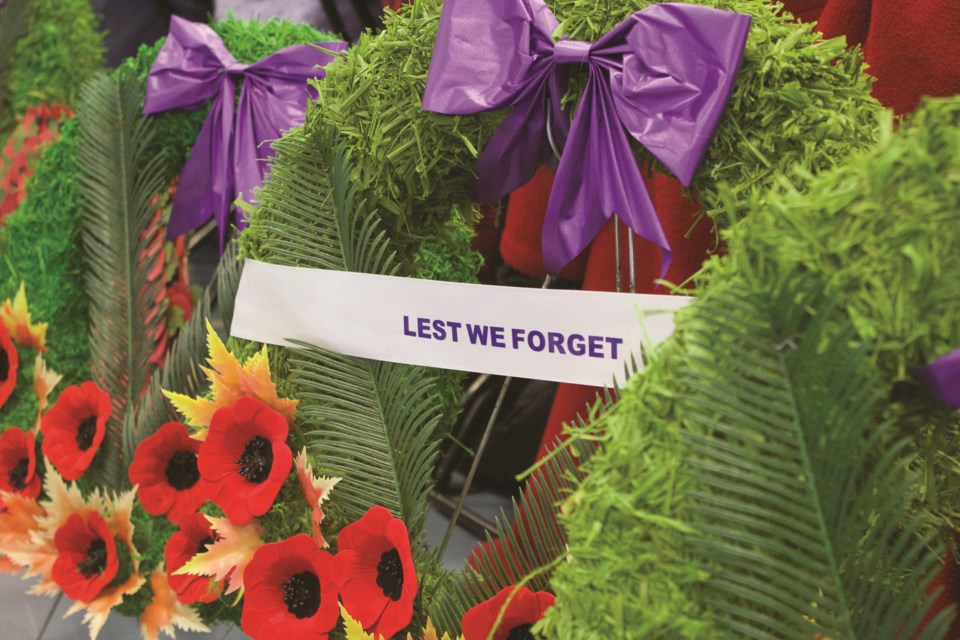 Airdrie will reflect on the sacrifices of Canada's military personnel during the annual Remembrance Day Ceremony at Genesis Place, Nov. 11 at 10:30 a.m. File Photo/Rocky View Publishing

Airdrie will once again take time to commemorate the sacrifices of Canadian soldiers, during the annual Nov. 11 Remembrance Day ceremony.

According to Bill Drummond, master of ceremony and past president of the Royal Canadian Legion’s Airdrie branch, the event offers a chance to reflect not only on the loss of and sacrifices made by Canada’s veterans and fallen soldiers, but also the impacts incurred in times of conflict.

For Drummond, Remembrance Day has a personal importance – as the son of a soldier buried in Rome and a former soldier himself, he is well acquainted with the sacrifices of military personnel, and hopes others will remember “freedom isn’t free.”

“We have to remember what these people gave,” he said. “There’s 150 Albertans who died in Afghanistan. They didn’t give their lives for nothing; they gave their lives for a reason, and I would hope the general public would remember why they did and what they died for.”

As time puts distance between major conflicts like the World Wars, Drummond hopes parents will help younger generations appreciate the sacrifices made by Canada’s servicemen and women.

“I think it’s important we pass on remembrance to our children,” he said. “If we don’t tell the kids what it was that we did wrong that caused these wars, then kids may possibly make the same mistakes again.”

The ceremony will take place at Genesis Place Recreation Centre’s fieldhouse beginning at 10:30 a.m., with doors opening at 9 a.m.

Seating will be limited, and Drummond said residents should be mindful of the seniors and veterans in attendance. He asked seats not be saved unless they are for veterans.

“Please, if you sit in a seat and there’s an older person there, please give up your seat,” he added.

The ceremony will be limited to one hour, Drummond said, because of a new directive from the Department of National Defence decreeing cadets cannot parade longer than 60 minutes.

“Having no regular armed services personnel in this area, we rely heavily on the cadet corps for their participation,” he said

As a result, the program has been shortened. The ceremony will begin with the colour party marching in, and will include three speakers – retired lieutenant-colonel Al Price, Mayor Peter Brown and RCMP Insp. Kimberley Pasloske – followed by a reading of In Flanders Field, the playing of The Last Post and Reveille, and two minutes of silence. The ceremony will conclude with the laying of wreaths and the marching off of the parade.

This year, due to the time constraints, a ceremony will not take place at Airdrie’s cenotaph.

As in years past, the Legion will invite members of the public to its building for refreshments following the ceremony.