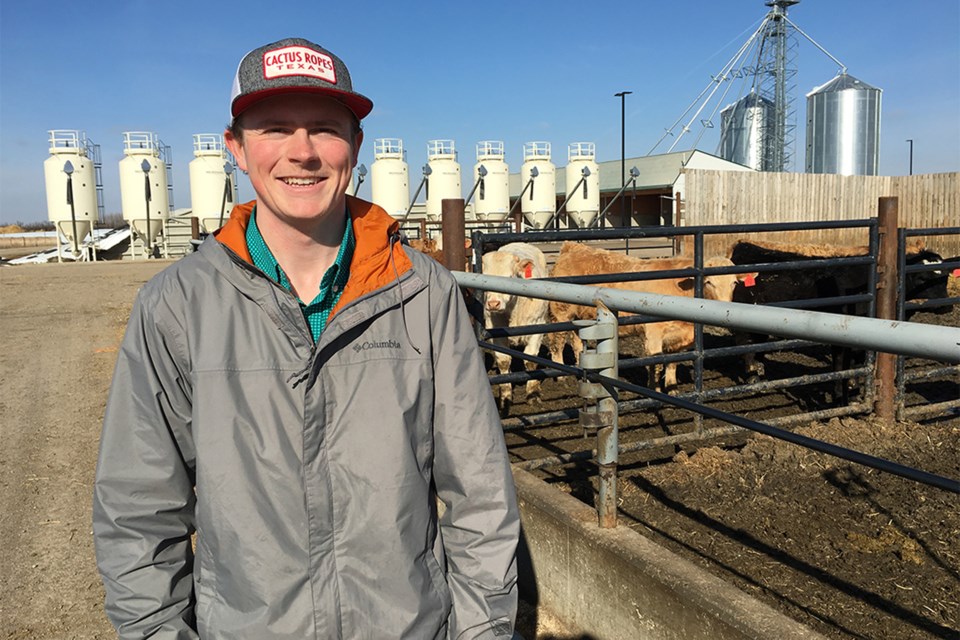 Airdrie's Coleman Nixdorff, a graduate student at the University of Saskatchewan, is investigating if steam-flaked corn is a viable alternative to barley for finishing cattle. Photo Lana Haight/For Rocky View Publishing

Barley is the most common grain used for finishing cattle in Western Canada, according to researchers from the University of Saskatchewan’s (USask) Livestock and Forage Centre of Excellence (LFCE). It’s typically dry rolled, but as a growing number of producers consider feeding steam-flaked corn, some – including researches at USask – wonder if the same process can work for barley.

For cattle to properly digest the starch in corn, the corn is processed through a steam conditioner before being rolled in a feed mill. But there’s a price to pay for this option – a steam flaking unit can cost between $78,000 and $300,000.

“If they are going to put the money into a steam flaking unit, they want to know if it will add value to their barley in the same way that it increases the value of corn,” said graduate student Coleman Nixdorff.

Now in the second year of his master of science degree program, the former George McDougall High School student can relate to producers’ concerns. His family owns Yankee Valley Ranch, located east of Airdrie, where they raise purebred Herefords and operate a commercial cow-calf operation.

Nixdorff’s feed project started at LFCE in mid-March with 420 steers ­– each weighing about 362 kg (800 lbs.). The research team divided the herd into four, with each group of 105 cattle (split into seven pens each) receiving the either dry-rolled barley, tempered barley that had been soaked in water for 24 hours prior to being rolled, mid-flake steam-flaked barley or coarse-flake steam-flaked barley.

“When the barley comes out of the steam chest, it’s flaked by rolling through a roller mill,” Nixdorff said. “This gelatinizes the starch, making it more available, and increases the surface area of the grain. It also decreases the fine particles in the feed because of the moisture that’s been added.”

It’s not clear if steam-flaking increases or lowers the risk of rumen acidosis, a digestive disorder in cattle that occurs when acid is produced faster than it can be used in the digestive process, he added.

Nixdorff expects the animals receiving steam-flaked barley to gain weight faster, using the nutrients more efficiently, because starch utilization contributes to weight gain. As the feed’s surface area and gelatinization increase, more starch is available for the rumen microbes to digest. That’s why, Nixdorff said, the flatter, mid-flake barley with more surface area will have more digestible energy than the coarse-flake feed.

“But the increase in the amount of energy from the processed barley could change the way the steers deposit fat, and possibly change the yield grade,” he said. “They might start depositing fat faster and that could affect the way they grade out on the rail.”

During the study, Nixdorff is calculating how much feed the animals consume, the amount of weight they gain and the gain-to-feed ratio. He’s also measuring their fecal starch concentrations, which will indicate if the grain has been fully digested.

The study will continue for another 12 weeks, until the steers have reached the target live weight of 650 kg (1,433 lbs.). After slaughter, Nixdorff will record the animals’ carcass weights, yield grades and quality grades. Their livers will also be examined for abscesses, a sign of rumen acidosis caused by feed that’s too high in carbohydrates.

Based on the study’s results, Nixdorff hopes to make a recommendation on the economic viability of purchasing a steam flaker for barley processing. For the beef industry to continue growing, he said, producers need to be looking for ways to improve.

“If we were still feeding cattle the way we were 30 years ago, we wouldn’t see the production efficiency we see today,” said Nixdorff, who plans to eventually return to his family’s ranch and work as a feedlot/cow-calf nutritionist.