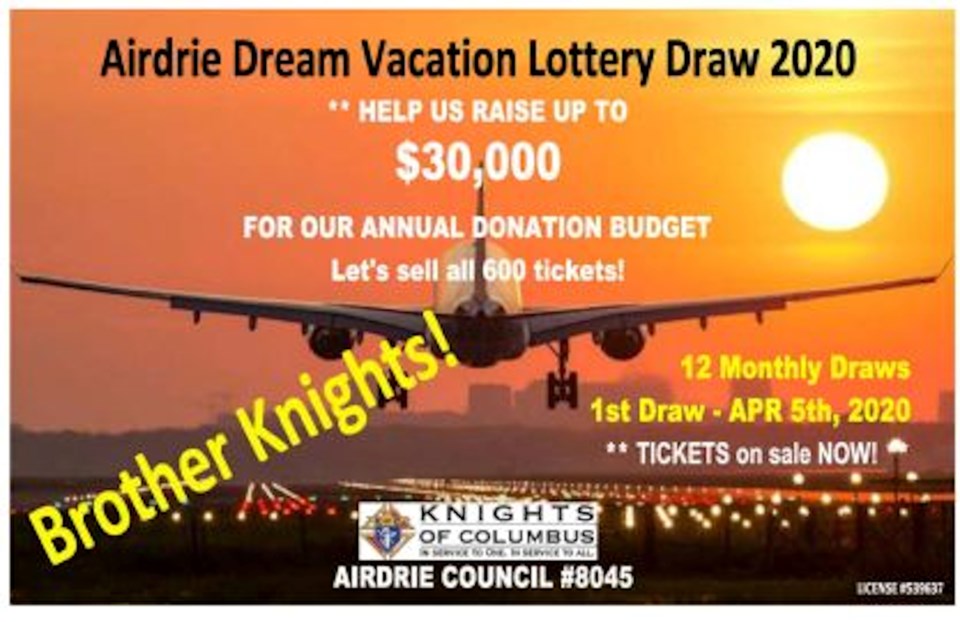 The 220 member Airdrie Knights of Columbus Council 8045 are involved in two major projects in March.

The first project involves our annual Dream Vacation draw. Since the draw started three years ago, we have donated over $40,000 to local charities such as the Veteran's Food Bank of Calgary, Airdrie Food Bank (AFB), all local high school, Catholic elementary schools, the Airdrie and District Hospice Society and more. We have also given away more than $70,000 in prizes.

Beginning April 5 and continuing for 12 months, we give away 12 Dream Vacation prizes of $2,500 each and 48 draws for $120. Only 600 tickets are sold, resulting in a very good chance of winning. If you do win your ticket remains in the draw for the following months.

Tickets can be purchased at St. Paul’s Parish office during regular business hours, after mass on weekends or online at airdriedreamvacation.ca

Additionally, the Knights will be selling tickets at various venues.

All travel prizes are purchased through our travel partner Carlson Wagonit Travel.

The other major event involves fundraising but of a different nature. This is the third year for the Food for Families 40 Cans of Lent program. Last year, the initiative raised the equivalent of $18,200 for AFB.

“The Airdrie Food Bank is grateful to Airdrie Knights of Columbus for their ongoing support...,” said Lori McRitchie, food bank executive director. “We rely on support like theirs to feed individuals, children and families in Airdrie and area that are dealing with food insecurity.”

Each Sunday during the 40 days of Lent, the Knights will collect food under the heading of 40 Cans for Lent. We know hunger knows no season and parishioners and Knights are encouraged to give what they can. Food and monetary donations are accepted at St. Paul’s. Tax receipts will be issued through the food bank.

As partners, the four Catholic elementary schools also collect food through their schools, which the Knights collect and delivery to AFB after the Lenten period.

The 40 Cans for Lent initiative’s target is to collect 4,000 pounds of food, but the Knights hope to surpass this goal. The general public is encouraged to give to this project, too, and food can be dropped off at St Paul's.