Airdrie Festival of Lights to turn on Dec. 1

The smallest shoppers will have an opportunity to pick out presents for mom and dad at the Kids’ Only Market during this year’s Airdrie Festival of Lights (AFOL), which kicks off Dec. 1 at Nose Creek Park.
Nov 29, 2018 12:01 AM By: Airdrie City View 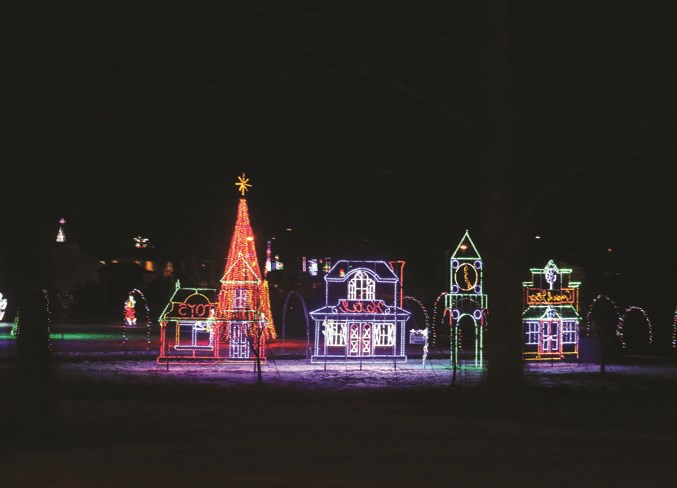 The smallest shoppers will have an opportunity to pick out presents for mom and dad at the Kids’ Only Market during this year’s Airdrie Festival of Lights (AFOL), which kicks off Dec. 1 at Nose Creek Park. “Everything is handmade, from local vendors,” said Michelle Pirzek, AFOL festival co-ordinator. “It’s a place where kids can shop, without their parents, for gifts that are $10 and under.” The Kids’ Only Market is located inside Santa’s Workshop, open from 6 to 9 p.m. each night of the festival. This is the event’s 23rd season, and the AFOL society board has a number of new displays for visitors to view, according to Pirzek. “One of the display pieces [the founders] really wanted to get was the Twelve Days of Christmas. It was out of their budget,” she said. “This year, we were able to buy the Twelve Days of Christmas and we’ll be unveiling it opening night. We’re so excited.” Lights are also being added to the penguin village, the skating party and the townscape, she added, at a total cost of approximately $40,000. The festival opens its gates Dec. 1 – Santa Claus will be on hand to help turn on the lights. The opening ceremony gets underway at 6:15 p.m., and visitors can grab a free hotdog, courtesy of FortisAlberta, between 6 and 8 p.m. Santa will also come back down from the North Pole to visit the festival and take photos with the kids, Dec. 4, 11, 18, 22 and 23. Returning Dec. 20 is the seventh annual Great Train Race, which pits Airdrie Fire Department members against EMS to see who can sell the most tickets. The winner donates the proceeds to the charity of its choice. “They are already smack talking – it started about three months ago,” Pirzek said. AFOL’s three miniature trains take old and young alike for a fun trip around the park every night during the festival – tickets are $2 each, and kids under two ride for free. Hot chocolate, apple cider and coffee are available from the park’s concession at $2 per cup. Prices for the train rides and hot beverages have not increased throughout the 23 years of the festival, according to Pirzek. A full slate of entertainment is planned throughout the Festival of Lights. Bands and choirs from the community and local schools will provide a selection of music, and carolers will stroll through the park on certain days. Actors from the Nose Creek Players’ production of How Cindy-Lou Saved Christmas will be at the park Dec. 9, and Dec. 23, there will be a special Christmas edition of the Airdrie Ghost Walk. Santa’s reindeer will take a break from training to visit the festival Dec. 22. New Year’s Eve is always special during the festival and this year, Pirzek said, is no exception. A family-friendly DJ Dance Party will light up the heated entertainment tent from 7 to 9 p.m. The lights are on from 6 to 9 p.m. daily, and admission to the festival is by donation. According to Pirzek, last year’s festival drew approximately 60,000 visitors – up by about 10,000 from 2016 – and their donations account for 25 per cent of the event's revenue. With an annual budget of approximately $100,000, Pirzek said, the society raises the remainder through sponsorships and grants. But not all of that money goes to operations; approximately $30,000 each year is given back to the community. “Other non-profits come out and volunteer with us and we pay them. It’s not a lot of money, but it’s funded trips to Disneyland and equipment for different school sports teams,” Pirzek said. “We also support the Airdrie Lioness, 100 Airdrie Women who Care, Community Links – it’s more about giving back than taking in, that’s for sure.”