At the Kinsmen Ride for a Lifetime June 22, Evelyn, Ryan and Josh Crowell waved goodbye to bikers who wore their late brother’s name on their chest.
0
Jun 28, 2018 12:01 AM By: Airdrie City View 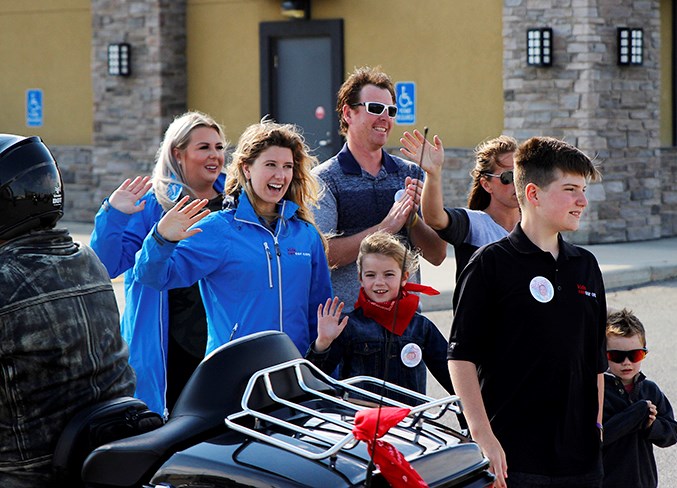 The Crowell family waved goodbye to bikers June 22 as they set off on the Kinsmen Ride for a Lifetime, a fundraiser aimed at supporting Kids Cancer Care.

At the Kinsmen Ride for a Lifetime June 22, Evelyn, Ryan and Josh Crowell waved goodbye to bikers who wore their late brother’s name on their chest. The gesture honoured their brother, Christian – an Airdrie boy who passed away from cancer in 2013, at the age of five.

The ride was held in support of Kids Cancer Care (KCC), with motorcyclists raising money for research and support before taking off towards the Rockies. Megan Crowell, Christian’s mother, told his story to a legion of teary-eyed bikers at Mr. Mike’s in Airdrie as they prepared to leave.

“When you have a child that passes away, your very first fear as a parent is your child will be forgotten,” she said. “People look at you different. They avert their eyes and avoid conversation, as they don’t know what to say and they don’t want to make you sad. But KCC gave us an opportunity to speak Christian’s name, to celebrate his amazing little life and remember his fight.”

Christian was only three years old when he was diagnosed with embryonal rhabdomyosarcoma – a rare, aggressive form of cancer. A mini-football-sized tumor soon had control of his abdomen, according to Crowell.

For the next two years, she said, Christian endured chemotherapy, three surgeries –including a stem cell transplant – remission and relapse. Despite that, Crowell said once the pain was over, Christian didn’t complain. He was ready to play and be around other people.

“There’s always somebody whose story is worse,” Crowell said. “Even when he was dying in his hospital room, we said it could be worse. He had love, he had medication and he wasn’t in pain. He had lots of family. There are people that don’t have that, so we were very fortunate.”

Chris Crowell remembers his son as energetic and playful, with a great sense of humour. Christian was also “wise beyond his years,” Chris added – an ICU doctor called him the “Boy of Steel,” Chris said, because of the strength Christian showed throughout his treatment.

According to KCC, cancer is the leading cause of non-accidental death in children from six months old to young adulthood. Still, research remains underfunded – only five per cent of cancer research funding in Canada goes to children's’ cancer, according to KCC’s website.

KCC also said more than 20 per cent of its annual revenue comes from community fundraisers like the Kinsmen Ride for a Lifetime.

Chris said it was KCC and the support of the Airdrie community that helped his family through the wrenching time.

Two weeks prior to Christian’s death, Jan. 14, 2013, Megan Crowell learned she was pregnant. Josh was born seven months after his eldest brother passed away, but according to Crowell, he carries many of the same characteristics Christian did. That saved her, she said.

“Christian’s involved in everything we do now, so they accept the fact that he’s still with us,” Chris said of his children. “There’s pictures everywhere, we talk about him all the time and even when we go on road trips, we bring his passport.”

Crowell asked the bikers June 22 to think of Christian as they weaved their way through the Rockies – to remember him in the mountains he loved, throwing rocks into the Bow River, “as we drew strength from the towering peaks.”