Airdronian with cancer walking to give back

On Cancer Survivor Day, June 3, the Leukemia and Lymphoma Society of Canada opened registration for its Light the Night Walk, which takes place in October.
Jun 7, 2018 12:01 AM By: Airdrie City View 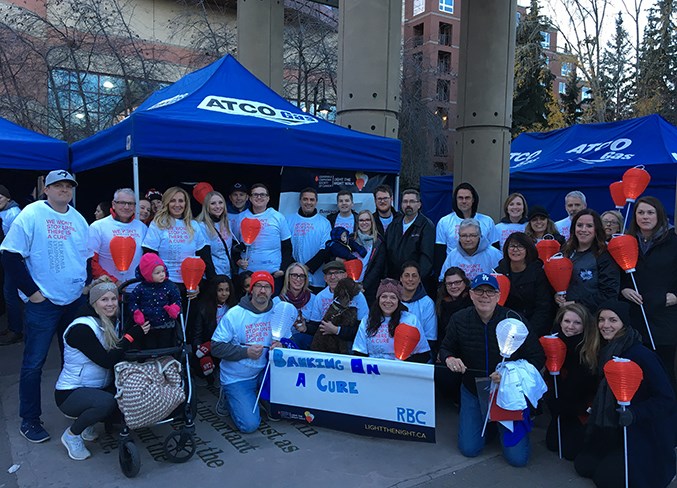 Kent Parlee, and his team of family members and co-workers, raised $15,000 at last year&#8217;s Light the Night Walk. They hope to hit a similar target this year.

On Cancer Survivor Day, June 3, the Leukemia and Lymphoma Society of Canada opened registration for its Light the Night Walk, which takes place in October. Kent Parlee, an Airdronian living with cancer, will be there to help raise money and support for cancer research. Parlee was in Fort McMurray June 2, to participate in the city’s first annual Light the Night Walk. At last year’s walk in Calgary, his team raised $15,000. In 2006, Parlee was diagnosed with chronic lymphocytic leukemia (CLL). He was 42 at the time, but it was a slow-moving cancer – a 25-year cancer. “People die with it, not die from it,” he said. According to Parlee, he had a busy, happy family life, with a wife and three children – the oldest in university. A life, he said, he wasn’t going to put on hold. “I just compartmentalized (the diagnosis) and put it off into the back of my mind,” he said. In August 2008, Parlee started his first round of chemotherapy. His treatments were administered every third Wednesday, which allowed him to continue working full-time. He continued with chemo until treatment was increased when his cancer returned in June 2010. By December that year, Parlee had developed aplastic anemia, which meant his immune system had died. Forced off of chemo because of his failing immune system, he went through almost six months of infections, trips to and from the hospital and near-weekly blood transfusions, until his body had enough and he was admitted to the hospital for good. After worrying for some time he wouldn’t find a donor, Parlee received a bone marrow (hematopoietic) transplant. He was finally given a new immune system, but the process was arduous. “I was told at the time my odds of surviving the first 30 days was five per cent,” Parlee said. “You lay there waiting, day-in-day-out, to see if this new immune system that’s been put into your body is actually going to take and start to grow. “There was about a 10-day to two-week period there where I don’t remember anything other than pushing the button for more morphine to kill the pain.” Through a tiredness he said was difficult to explain – a treatment fog where it was difficult to mow the lawn and where he couldn’t remember how to spell his own daughter’s name – Parlee recovered. By August, he was able to attend his son’s wedding in Cape Breton, N.S. He was hit with another roadblock, called graft versus host disease, soon after. His new immune system was confused by its host, and started attacking his gastro-intestinal system and lungs. Again, he was hospitalized – and again, he pulled through. Despite struggles with depression, he said, he continued to work through much of that time, as to maintain as normal a life as possible. Parlee said his faith, family and friends helped him through. “Cancer is a very personal disease, but it’s a family disease,” he said. “It’s not just me that’s going through it. It was all of us.” Parlee and his family have participated in the Light the Night Walk for a number of years. He also volunteers on the walk committee, and is a contact for others diagnosed with CLL who need someone to talk to. When Parlee first went to the walk in 2008, he wasn’t a candidate for a blood stem cell bone marrow transplant. In 2011, he was. “Some of that is because of the advancements in research and treatment, which is a result of people raising money and donating and supporting and encouraging the cause,” Parlee said. “I feel I’ve got an obligation and responsibility to give back in some small way.” To donate or register for the Light the Night Walk in Calgary on Oct. 20, visit lightthenight.ca