This year has been a hard one for many. For the Meyers family, it’s been an absolute roller-coaster.

2020 not only brought a global pandemic to contend with, but the Airdrie family also had to navigate a rare cancer diagnosis for its newest member and full-scale kitchen remediation following the discovery of black mould and asbestos.

Kayleigh Meyers gave birth to her third child – a girl they named Whitney – in April. For the first few months, everything seemed fine. Meyers said Whitney was developing well and meeting all the typical milestones, but in late August, the four-month-old started to show some cloudiness in her right eye.

“At first, we didn’t realize there was anything to be worried about,” Meyers said. “No one has ever mentioned to us you should look for something in your child’s pupil.” 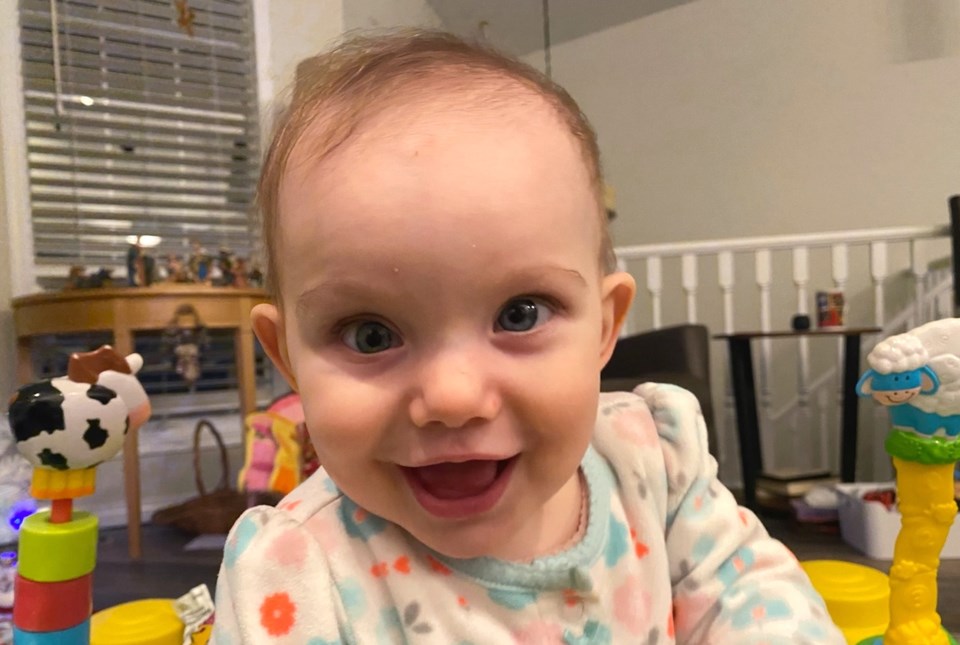 Shortly after discovering the cloudiness, the family decided to take Whitney to an optometrist, who immediately noticed something amiss and referred the family to the Rocky View Vision Clinic in Calgary. There, doctors informed Meyers that Whitney possibly had retinoblastoma, a form of eye cancer. In a fortunate coincidence, Toronto retinoblastoma specialist Dr. Brenda Gallie was in Calgary treating patients at the Alberta Children’s Hospital that day.

“We got in to see her that same day and we got that diagnosis by dinnertime that night that she had retinoblastoma and would have to be treated in Toronto,” Meyers said.

When she heard the cancer diagnosis, Meyers said she almost fainted from the shock.

“It was the most overwhelming sensation to be told this was what was happening to my baby, who I thought was in great health," she said. "It was quite jolting and I honestly nearly threw up.”

Within a few days, Whitney and her mom flew to Toronto for initial treatments at Gallie's specialty clinic. Due to the pandemic, Meyers said they had to be extra cautious and comply with additional health and safety protocols, such as flying out to Toronto a day early and being tested for COVID-19 upon arrival.

According to Meyers, Gallie determined the best treatment for Whitney would be inter-arterial chemotherapy, which would target Whitney’s eye and prevent the need to flood her entire body with chemotherapy.

Meyers said the procedure – which Whitney went through twice – was an intense process.

“She had to be sedated and then they thread a catheter with the chemotherapy drug through the artery at her groin and thread it up using magnetic imaging, up her body, through her neck and to her eye,” she said. “It’s like a four-hour day surgery. They were able to target the chemotherapy drugs right to the eye and stop any cancer cells from going up the optic nerve to the brain.

"That’s why this cancer, it’s rare, but it’s scary just because of how close it is to the brain. That struck down the tumour and killed the cancer cells that very easily could have spread up the optic nerve.” 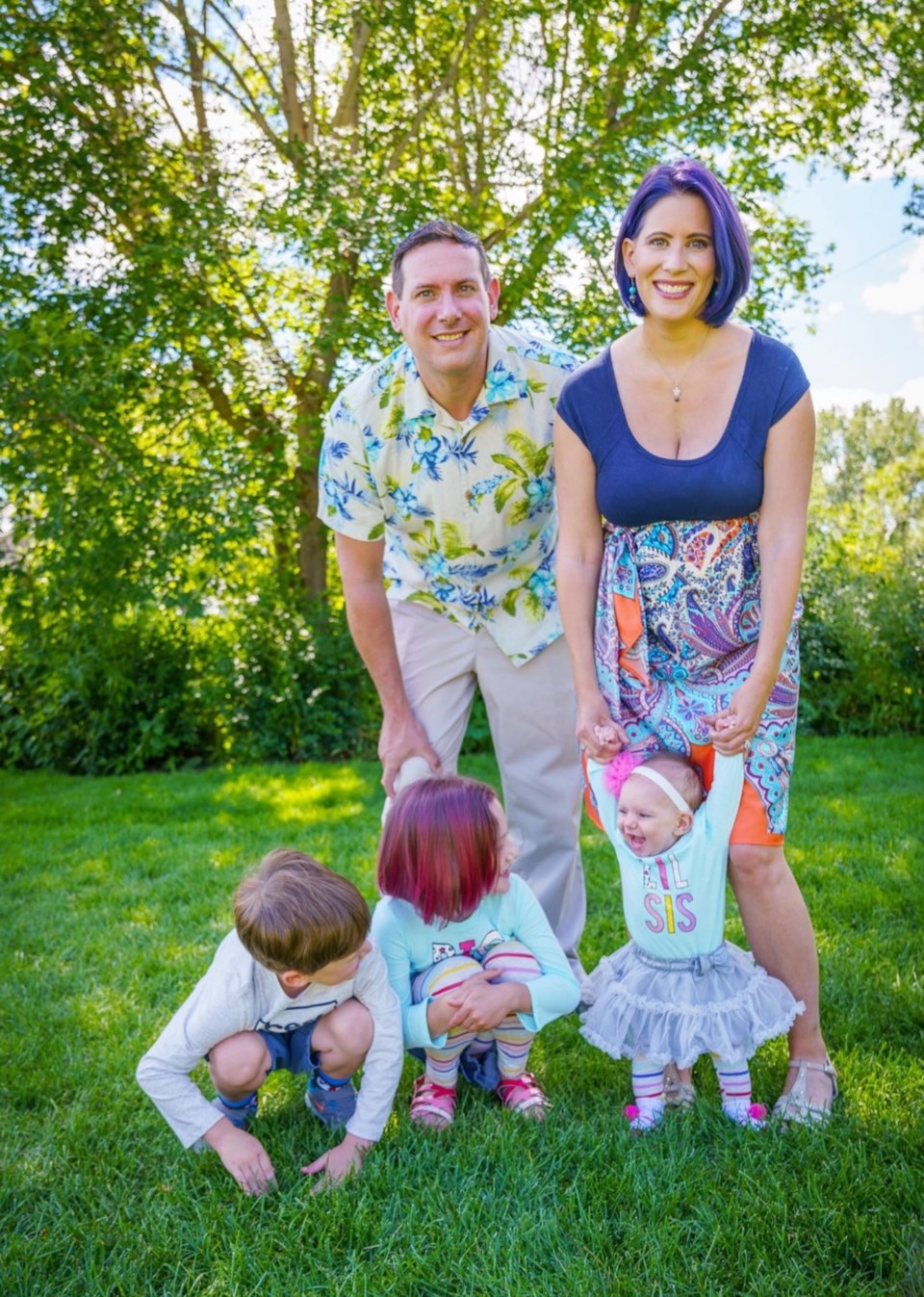 The Meyers family has overcome significant hurdles in 2020, including a retinoblastoma diagnosis of their newborn daughter, Whitney. Photo submitted/For Airdrie City View.

Whitney's pathology report in November indicated the chemotherapy had been successful; Whitney was free of cancer and it had not spread to her brain. However, the cancer had left Whitney blind in her right eye and Gallie recommended enucleation – surgical removal of the eye.

Whitney received her new prosthetic eye in December, according to Meyers.

“We’re so thankful. She has an eye and even though it doesn’t work, she looks like a normal child,” she said. “If you look closely, you’ll see in the prosthetic that the pupil doesn’t change size but glancing at a photo of her or seeing her out and about, you wouldn’t immediately realize she has a prosthetic eye.”

Meyers said the good news – just in time for the holidays – felt surreal after everything the family had been through.

“It’s crazy. Literally, my baby’s first Christmas, we’re celebrating her being cancer-free and her first Christmas present is a new eye,” she said. “We’re extremely grateful we’re a family that’s had a good result. She doesn’t need any more chemotherapy. If the pathology report had come back that she still had cancer cells still in the eye socket, she would have to do full-body chemotherapy. That would be the hair loss, vomiting – all of that, and a few rounds of it.”

Whitney’s cancer diagnosis wasn't the only ordeal the family would bear in 2020, as a leaky dishwasher revealed the presence of black mould and asbestos in their kitchen.

“When one of the remediators came, they realized there was old linoleum underneath the current laminate floor that had gotten wet from the dishwasher leak. They determined that was asbestos floor, so they had to go through a more expensive process of tarping off the area, not just because of the mould but also the asbestos,” she said. 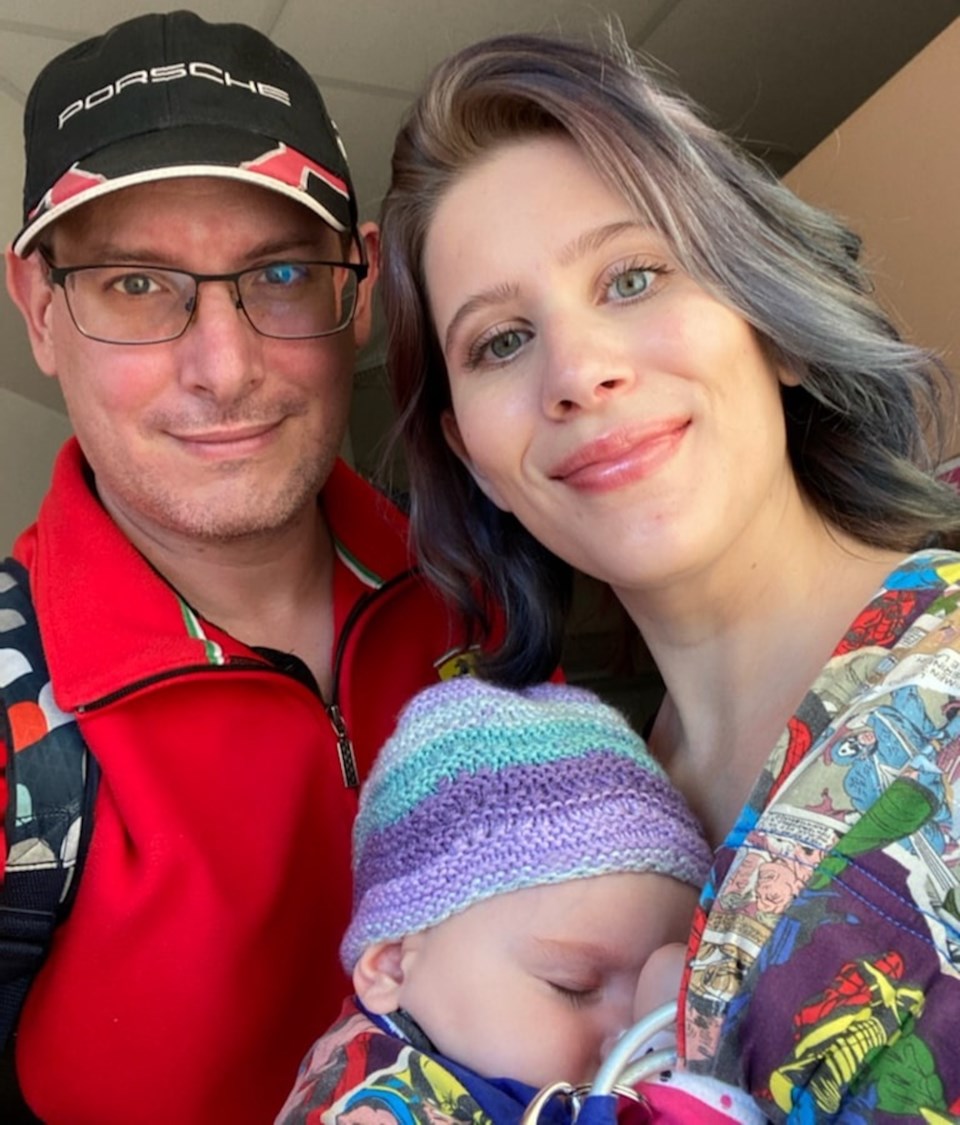 Kayleigh Meyers (right) said her family is grateful Whitney is now cancer-free and the family can spend Christmas together this year. Photo submitted/For Airdrie City View.

The necessary modifications will cost approximately $50,000, according to Meyers, with only a portion covered by insurance.

Adding to the financial stress, Meyers said her husband, who is a self-employed IT specialist, was forced to claim the Canada Emergency Response Benefit for a portion of the year.

"I know we're not the only ones in that boat and our story isn't unique, but we're trying to figure out what we need to do to stay financially afloat," she said. "We're selling a vehicle and going down to one car, but even selling stuff is hard during COVID."

The house remediation forced the family to move in with Meyers' parents – who moved to Airdrie last summer – where they have remained since November.

To help the Meyers, an extended family member set up a Go Fund Me page, which has raised more than $10,300 as of Dec. 21. The donations will help pay for the three trips to Toronto and for Whitney’s prosthetic eye. Meyers added the prosthetic will have to be replaced sporadically throughout Whitney's early childhood.

Online auctions have also been held to support the family.

“We’re really thankful for the way people have just, around the community, reached out with kindness to help lift our spirits and help in ways they’re able to,” Meyers said. 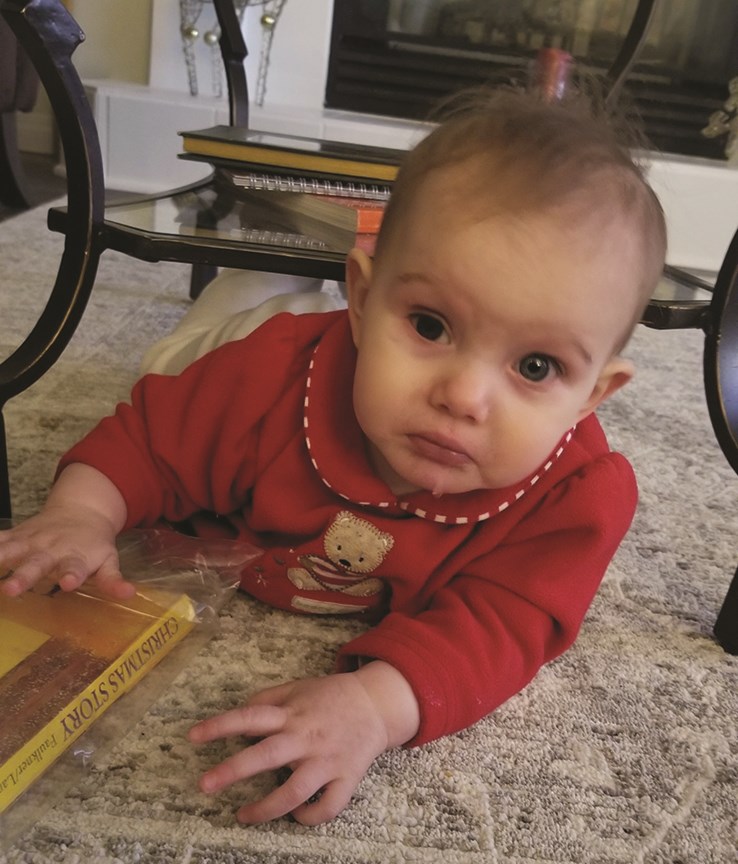 Whitney Meyers received a prosthetic eye in December, just in time for the holidays. By Submitted/For Airdrie City View

As a way of chronicling the family’s journey and answering questions about Whitney’s diagnosis, Meyers started a Facebook page titled Whitney’s Health Journey.

“I noticed so many people messaging me with the same questions,” she said. “I do want to raise awareness for childhood cancers and share our story because I think that can help other families in similar situations. It can help a family realize retinoblastoma is a thing, that it’s easy to look for and very treatable when caught early.

"I feel I have a responsibility to share our story if it can help other people. That’s my perspective on life.”

After a turbulent year, Meyers said she is thankful Whitney is now cancer-free and the family can spend Christmas together.

“The number-one thing for us is that Whitney is healthy, that we’re all under one roof, we don’t need to do any more travelling and we get to spend Christmas together as a family," she said. "Overall, we’re very grateful.”