An Airdrie artist who submitted her coffee-infused painting into a national art competition has been selected as one of the top three contestants eligible to win a cash prize, in addition to some online exposure and a money donation to the healthcare organization of their choice.
Jun 23, 2021 4:00 PM By: Carmen Cundy
Previous Next
Melissa Bruglemans-LaBelle has placed in the top three artists eligible to win HealthPRO Canada's Faces of Healthcare competition. Photo submitted/For Airdrie City View
Expand

An Airdrie artist who submitted her coffee-infused painting into a national art competition has been selected as one of the top three contestants eligible to win a cash prize, in addition to some online exposure and a money donation to the healthcare organization of their choice.

Melissa Bruglemans-LaBelle submitted her painting, “Coffee Break” to HealthPRO Canada’s Faces of Healthcare competition earlier this spring. Her entry depicted various health care workers on their coffee break, exhausted from their shift. She used some unique tools for the painting, including a blend of brewed coffee and watercolour paper.

The first round of voting took place from April 5 to May 17, and it was announced on June 16 that Bruglemans-LaBelle had made it into the competition’s top three finalists.

“I didn’t think that I would go this far, to be honest,” Bruglemans-LaBelle said. “I thought that I would be at least in the top 10 at the rate [the votes were] going, but then it just skyrocketed up to three.

“I was very surprised and happy [and] I’m still kind of in shock processing it.”

The grand prize winner of the contest will receive $25,000 to be directed towards a publicly funded Canadian health-care facility of their choosing. They will also receive a cash prize of $3,000, and exposure on the HealthPRO Canada website and social media channels.

Bruglemans-LaBelle said if she wins top prize, the money will be donated to the Airdrie Health Foundation, a charitable organization that raises funds for the Airdrie Community Health Centre, Urgent Care, and other high priority health-care needs in the community. She added the funds will be specifically directed towards mental health initiatives in the community.

The second- and third-place winners will also receive online exposure, as well as cash prizes of $2,000 and $1,000, respectively. 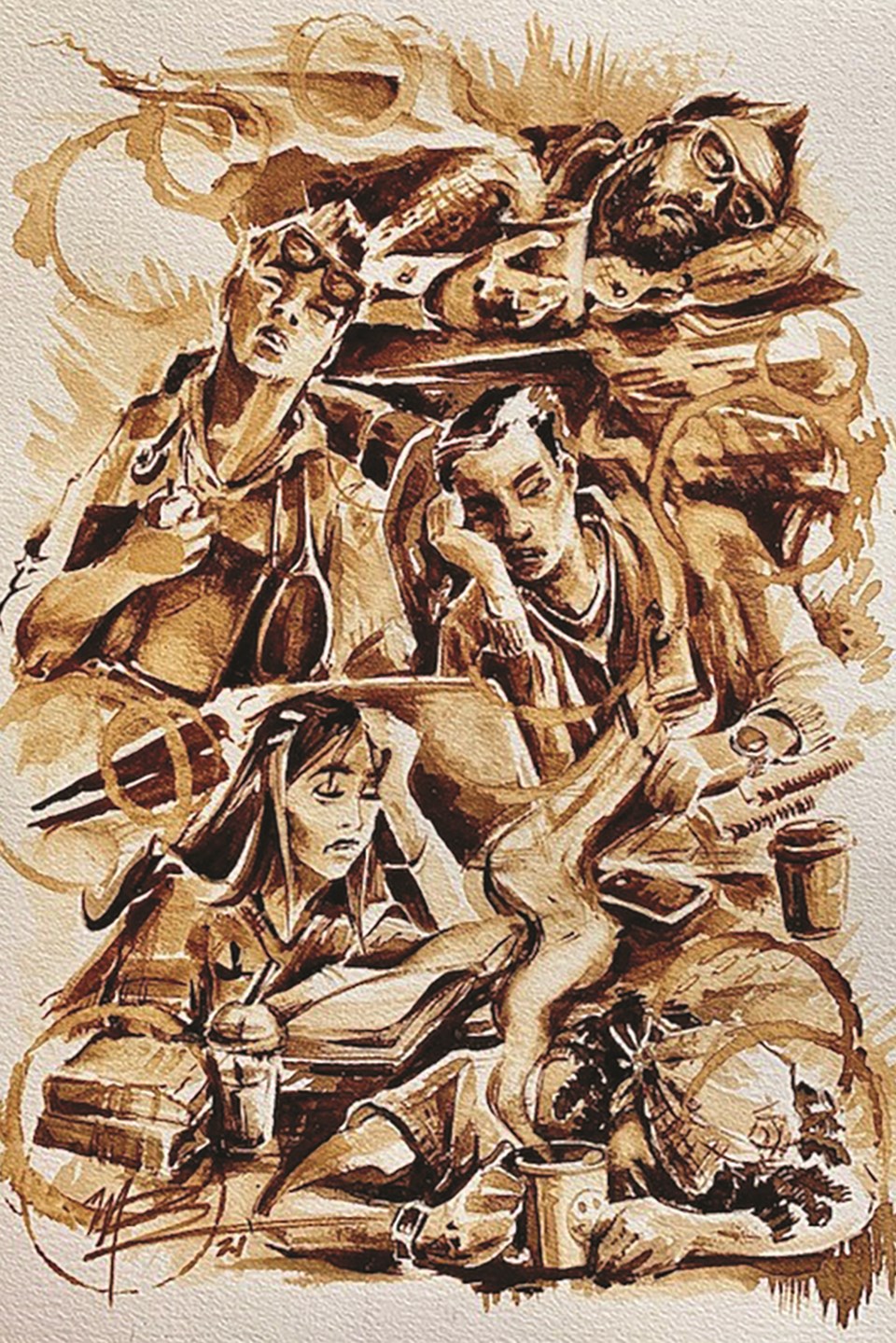 Bruglemans-LaBelle said she heard about the contest through a friend, who is a member of a Facebook page for Airdrie artists.

“And so, she told me about this one and I was like, ‘Okay, I’ll keep that one in mind,” she said.

“I had it in the back of my brain the whole time, just kind of on the back burner."

She added that as she approached the closing date for entry submissions, she figured she would start on a few rough paintings to see which design she liked most, and hopefully be able to enter the contest before the submission deadline.

The day before the deadline, she said she chose one of her paintings that she felt best represented the spirit of the competition.

Bruglemans-LaBelle started painting with evaporated and condensed liquid coffee a few years ago. But before that, her specialty was oil painting and drawing. She said she has been dabbling in art for as long as she can remember, starting to draw when she was a little girl.

She started to take her craft more seriously when she enrolled in an art program at Augustana University, now University of Alberta’s Augustana campus. She later received a second degree from the Alberta College of Art and Design, now known as the Alberta University of the Arts, in Calgary.

"I enjoy doing things in motion,” she said. “My husband says that I tend to be a lot more animal-heavy [with my art], but I am now doing more human stuff too.

Bruglemans-LaBelle is no stranger to using her art to raise funds for charities. In 2017, she sold limited edition prints of a coffee painting depicting Tragically Hip frontman Gord Downie after he passed away. For every print sold, she donated $5 to the Gord Downie Fund.

She is also a member of Studio 52 ­– a group of Airdrie artists that take on year-long art challenges to create a new piece of themed art for each week of the year.

According to Bruglemans-LaBelle, out of all of the entries nation-wide, there were only eight entries from Alberta.

“I kind of looked through and took value as to who was from where,” she said. “It was very heavily weighted to the eastern side of Canada. It was quite shocking... [being selected in the top three] is very big.”

She said what appealed to her about this contest was the chance to make a difference in her own community.

Those who would like to know more about the competition are encouraged to follow the #FacesofCanadianHealthcare competition on social media and visit facesofcanadianhealthcare.com