For three hours June 16, fathers and daughters streamed onto Midtown Drive for the third annual Daddy Daughter Hair Day, hosted by the Airdrie Angels program.
Jun 21, 2018 12:01 AM By: Ben Sherick 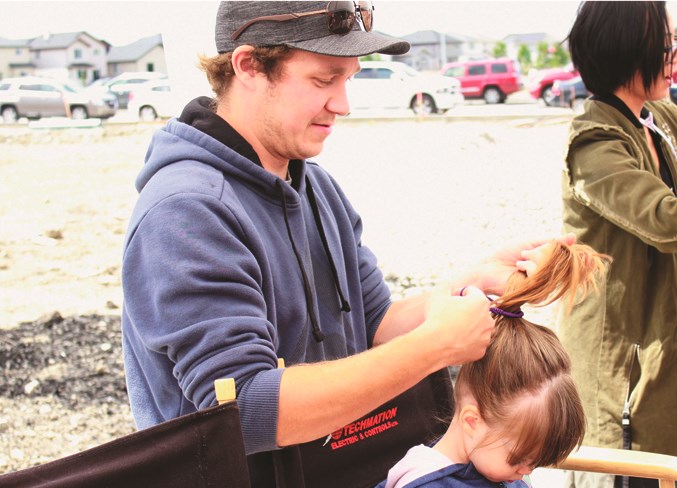 Delvin Ward tries his hand at putting his daughter, Ayla&#8217;s, hair into a high ponytail at the third annual Daddy Daughter Hair Day June 16. The event, hosted by the Airdrie Angels Program, gave dads an opportunity to spend quality time with their daughters.

For three hours June 16, fathers and daughters streamed onto Midtown Drive for the third annual Daddy Daughter Hair Day, hosted by the Airdrie Angels program. Held the day before Father’s Day, the event saw Airdrie dads learn how to style pony tails, pig tails and braids from the staff of Best of Seven Barbers. “We came up with the program to help dads get over one of their greatest fears, which is doing their little girls’ hair,” said Matt Carre, co-founder of the Airdrie Angels program. In addition to helping fathers learn a practical skill, Carre said the event is an opportunity for dads to spend an afternoon bonding with their daughters. “With work and other things, we don’t take downtime to spend a little bit more time with our little girls,” he said. Carre said he was inspired to start the annual event after seeing a video online in which a Montreal barber taught dads to do their daughters’ hair. Though Carre is not himself a barber, he said the idea resonated with him. The event also featured face painting, a barbecue and – for a minimum donation of $20 – hot shaves. The funds raised through the event benefits the Airdrie Angels program, which helps local families in need. “We find families that are struggling through no fault of their own and we go to the community, put a package together and we give it to them,” Carre said. According to Carre, the packages are usually valued at $1,500 to $2,000. Since its creation in 2013, Airdrie Angels has helped 78 families and given out more than $150,000 of cash, gift cards and other items. “We always try to tailor the package to the recipient’s needs, so it’s not just a standard package,” Carre said. “At the end of the day, it’s not always about financial need. Sometimes, it’s emotional support. People need to know – especially if they’re going through a hard time – that other people care about them.” Carre said the organization plans to return with another Daddy Daughter Hair Day in 2019, holding the event once again on the Saturday before Father’s Day. “If people missed us this year, find us again next year,” he said. Throughout the year, Carre said he hopes dads will make time for what’s most important – their families. “It’s always time to stop and smell the roses, for lack of a better term,” Carre said. “As a society, we struggle with responsibilities, with time, so we just need to stop and spend time with our families – because at the end of the day, that’s the most important thing. I’m guilty of it, as well.”