The entrepreneurial spirit of a young Crossfield boy has inspired him to open his own business this summer.
Jul 30, 2020 1:00 PM By: Kate F. Mackenzie 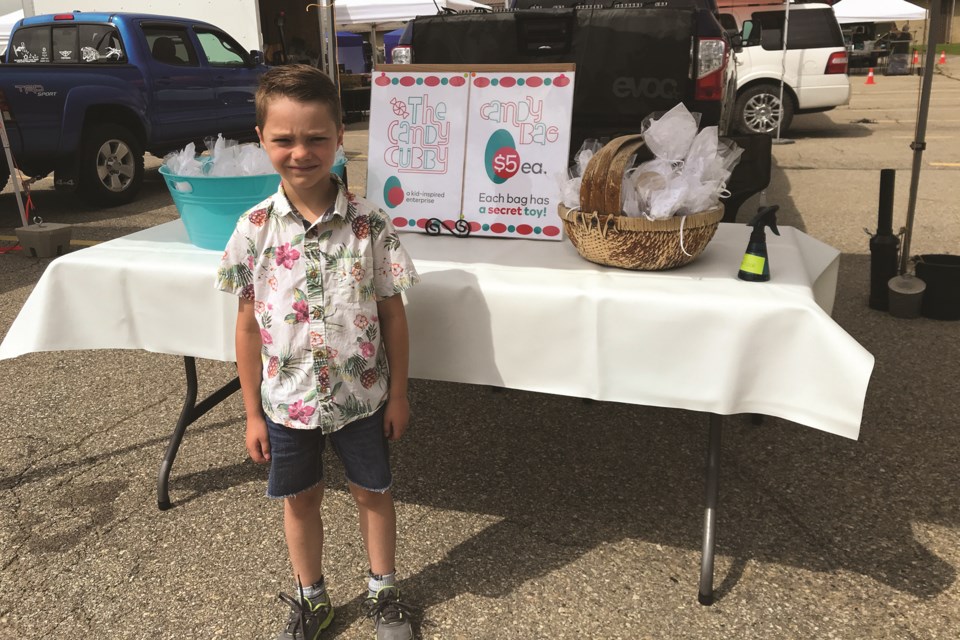 Six-year-old Bodhi Devauld has opened his own business, The Candy Cubby. Devauld sold half of his inventory on his first day at the Crossfield Farmers Market. Photo Submitted/For Rocky View Weekly.

The entrepreneurial spirit of a young Crossfield boy has inspired him to open his own business this summer.

Six-year-old Bodhi Devauld is the proud owner of The Candy Cubby, a business that sells bags of Jolly Rancher Misfits gummies with a mystery toy hidden in each purchase.

“I’m getting a lot of customers and a lot of money,” Devauld said. His mom, Chelsey Devauld, used to chair a non-profit organization for women entrepreneurs; when Devauld said he wanted to open his own business, she knew exactly where to start.

“I went online and found this business plan for kids, called Biz Kids,” she said. “They have templates and guides, so we printed off a little business plan and went through that together.”

Chelsey knew her son was serious about the business when he persistently asked to work on the business plan. An important element Devauld wanted to incorporate into the plan was a mysterious toy in each bag.

“A few months ago, I had to get a booster shot for Mexico,” he said. Afterwards, the pharmacy gave him the choice of picking any toy, and intrigued by an unknown “mystery box,” Devauld was pleasantly surprised to open it and find the Mystery Chaser Mini Boo toy.

But before he could add any hidden toys into his bags of Jolly Ranchers, Devauld had to come up with the $65 startup costs, according to Chelsey, which would cover the price of 40 bags.

“Your startup costs come out of your own pocket to get you going, so he did a few chores, and he also had an auntie [who acted as an] angel investor,” she said.

But at $5 a bag, those costs have not only been returned, but surpassed.

Half of Devauld’s inventory sold at the July 23 Crossfield Farmers Market, and he achieved his goal of selling over 100 bags when he returned on July 30.

Cheryl Shea, the marketing manager of the Crossfield Farmers Market, said she was not surprised when she found out Devauld had created a business.

“He is, truly, quite a little entrepreneur,” she said.

A post that Shea made about the new business on the Crossfield Farmers Market Facebook page garnered lots of positive feedback – and even a few more sales.

“I had three friends email me instantly and say, “Put away three bags for me,” she said.

As for Devauld’s future business goals, he plans to continue with The Candy Cubby business throughout the summer.