A View to the Past: Airdrie’s newest community reflects city's Scottish roots

In previous editions of A View to The Past, I’ve discussed the history of some of Airdrie’s most enduring landmarks, The Nose Creek Bridge and The Water Tower on 1st Avenue.
Jul 30, 2021 1:00 PM By: Carmen Cundy
Previous Next
Airdrie's newest community Lanark Landing takes inspiritation from New Lanark, one of the earliest examples of a master-planned community in Lanarkshire, Scotland.
Expand

In previous editions of A View to The Past, I’ve discussed the history of some of Airdrie’s most enduring landmarks – the Nose Creek Bridge to the Elevators and the decommissioned water tower on 1st Avenue. While both historical sites offer insight into Airdrie’s humble beginnings, we need look no further than our city’s namesake to discover more about our now thriving urban community.

Airdrie, originally a stopping point for steam trains along Nose Creek, became home to innovative infrastructure that was ushered in to meet the needs of a growing prairie settler community. Infrastructure included roads and bridges, as well as water and grain towers.

Our prairie settlement was named after Airdrie, a town in the historic county of Lanarkshire in Scotland, located east of Glasgow. The Scottish town forms part of a conurbation (a region comprising multiple urban areas), in what is commonly known as the Monklands – our much-loved soccer park, Monkland Fields, was named after it.

In the Middle Ages, the region was home to the Cistercian monks of Newbattle Abbey, hence the name Monklands. According to local sources, these monks were both farmers and experts in early road construction. During the 12th century, these monks established the original Glasgow to Edinburgh road connecting Airdrie and Bathgate further east to eventually join up with the monk’s lands in Newbattle.

According to medieval historians, travel during this time was notoriously dangerous, as one would often have to traverse forests and boggy terrain with the threat of an ambush by a robber. Most people of the lower classes did not have access to a horse and it soon became more practical to travel via high ground (or the ‘High Way’) where once could avoid both the mud and the bandits.

Similar to the pioneers in the early 20th century who brought innovative roads and infrastructure to Airdrie, Alta., these monks brought the same type of innovation to the Monklands with their ‘High Way.’ 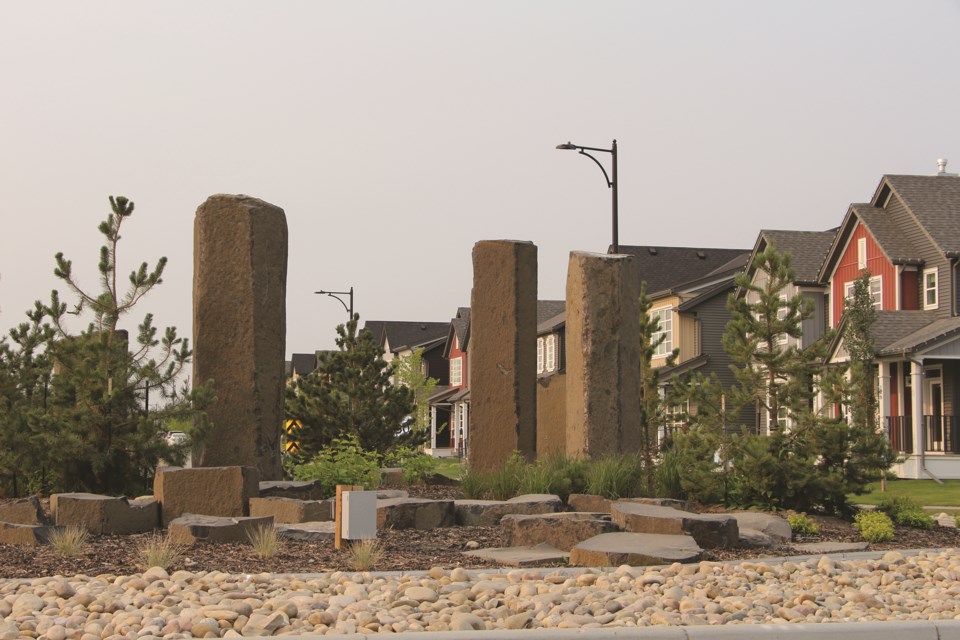 A circle of stone hedges is seen in the centre of a roundabout in Lanark Landing, taking inspiration from similar stone circle configurations in Scotland. Photo by Carmen Cundy/Airdrie City View

Another significant event in our sister city’s history was the passing of a special act of Scottish Parliament in 1695, whereby an Airdrie man was permitted to hold four fairs a year and a weekly market in the town. According to BBC Domesday Reloaded, a local history website for the digitized content of the BBC’s 1986 Domesday Project, this act of Parliament helped Airdrie to develop from a farming community to a market town in much the same way that Airdrie has evolved from its farming origins to a bustling business community.

During the next couple hundred years, the population of Airdrie, Scotland grew steadily to 7,000 residents in the 1830s. By the end of the First World War, the town was hit hard by casualties, and unemployment reached 30 per cent in the area.

As it had done before, the town brought further innovation in the form of industry and culture and as a result, it began to recover from its losses. Today, the town is home to a professional football (AKA soccer) team, a regional Monkland hospital, and a public library.

While you may be asking yourself, ‘What does the history of Airdrie, Scotland have to do with our city?’ I can tell you that I have come across more than a few similarities between the two communities in my research. What I have found is that both Airdries have had to innovate in order to keep up with the changing times, and both possess a spirit of perseverance.

Airdrie, Alberta’s newest community Lanark Landing, located in the southeastern-most corner of the city, is named after Lanarkshire, Scotland. Which is, I think, another testament to the shared bond these two communities have despite being more than an ocean apart.

According to Melcor, the developer of Lanark Landing, the word itself is Gaelic for “a clear open space,” and they envisaged the new community set amidst an open expanse of land and park space, according to its website.

Various elements and features in the community take inspiration from Airdrie’s Scottish roots, including the water wheel on the entry feature, taken from one of the earliest examples of a master-planned community – New Lanark. 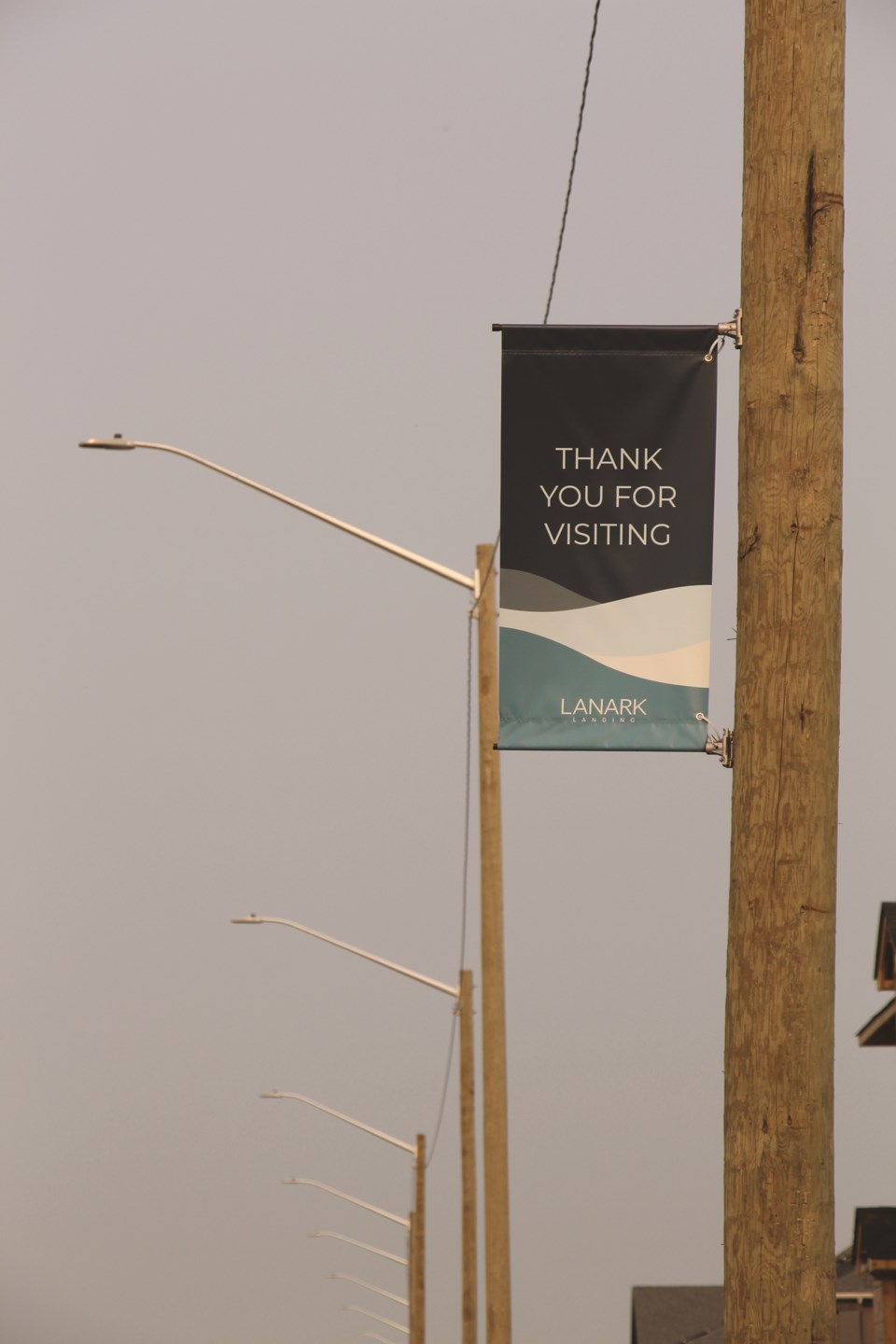 Signposts along the road exiting Lanark Landing include banners thanking visitors for passing through. Photo by Carmen Cundy/Airdrie City View

New Lanark, situated nearby the city of Lanark, was a successful cotton mill founded in the late 18th century. Due to its remote location, residents were needed nearby to work in the mill, and so utopian idealist Robert Owens was hired to design a community that would attract people from all around.

According to Melcor’s website, the community was home to well-designed housing with public buildings and open spaces to improve health in response to the ill-effects of an industrialized society.

But more than that, it is yet another tie between the two Airdries, nearly 12,000 km apart.