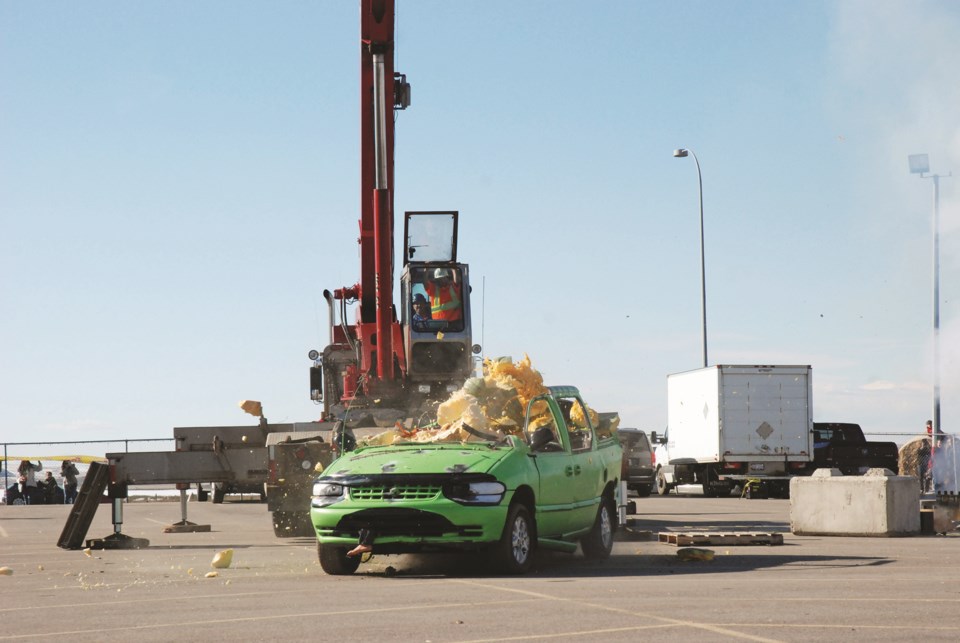 “I think we’ve gained a bit of a reputation for how fun this event is and how it’s focused on family fun,” said Marketing Manager Sheena Haffner.

Now in its 16th year, Haffner said, the Pumpkin Festival grows a little bigger with each iteration – 5,500 people took in the event last year.

The day promises to be a great outing for families, she said, with several pumpkin-related activities such as a Cinderella pumpkin coach ride, pumpkin bowling and pumpkin carving. The event will also feature a straw maze, petting zoo, face painting, a photo booth, a bake sale and several food trucks.

And, as in years past, the event will culminate with a giant pumpkin drop.

“We typically have a pumpkin that weighs between just over 500 to over 1,000 pounds,” Haffner said. “We hoist it up on a crane, and we drop it on top of a car and crush it.”

Haffner was unable to provide the weight of this year’s giant pumpkin, but said it is currently gaining between 30 to 40 pounds a day.

Typically, three giant pumpkins are dropped, Haffner said. The first will plummet between 2 and 2:30 p.m., with the grand finale at around 3 p.m.

New this year, she said, the festival will feature a hot-pepper-eating contest at 1 p.m., with peppers supplied by the same grower who provides the event’s pumpkins. Haffner said participants will take part in timed rounds, starting with a jalapeño and advancing to progressively hotter peppers.

“You have to eat the entire pepper, minus the stem, and you have to do that within a certain amount of time,” she said. “There’s disqualifications, if you drink – you can’t drink anything in between – or if you don’t make the time limit.”

The winner of the contest will receive a prize from the CORE Shopping Centre and a “hot-pepper-eating contest recovery kit” including gift cards for ice cream, Pepto-Bismol and other items.

Participants in the contest need to sign up ahead of time and complete a waiver from Hot As Hell Peppers & Produce’s Facebook page.

The event will also help a great cause, Haffner said – Blue Grass asks for a donation to the Alberta Children’s Hospital at the gate as admission, and proceeds from the bake sale and the food trucks will also support the hospital.

“The Children’s Hospital, in our opinion, is a very, very deserving organization in Calgary to contribute to,” she said. “Whether or not you have children, you definitely know a child who will be taking advantage of the Children’s Hospital at some point in their life, and if we didn’t have the right equipment to help a child, you can imagine how families would feel.”

Last year, she added, the Pumpkin Festival raised more than $30,000 for the hospital.