Debunking Fuel Economy Myths and a Guide to What Works

Don’t rely on old myths to maximize your vehicle’s range. Check out our guide for what works and what doesn’t when it comes to fuel economy.
May 10, 2021 7:00 AM By: Great West Media I Presented by Davis Chevrolet
It can seem like every driver on the road has a different tip to maximize gas mileage. From filling up at certain times of day to transmission and engine hacks, it’s hard to know how to separate fact from fiction when it comes to fuel economy.

You also might be surprised to learn that your go-to fuel-saving trick doesn’t actually help. We’ll look at some common fuel facts and clear up widespread misconceptions, so you’ll be getting the most out of every tank.

The octane number of your gasoline will typically be between 86-91, and the higher the number, the more stable your fuel is. Some premium products may be as high as 94 octane. Many drivers believe higher octane numbers lead to improved fuel efficiency.

This isn’t exactly the case, however. When fuel is more stable, engines and their components run more efficiently, but it doesn’t always translate to increased MPG. Premium options are made for high-performance engines and valuable when towing, but you won’t see significant changes on your daily commute.

Many drivers also believe that using “off-brand” gasoline from lesser-known stations can be harmful to their vehicle’s health. All gas must meet the same quality standards, so while you may miss out on brand-specific additives, you won’t be causing any long-term issues using the less popular stations.

If you’ve ever heard someone give an exact mileage when their fuel light pops on, it’s best to be skeptical. Most vehicle models will alert you when you’ve got around 10% of your capacity left. However, this number isn’t standard, so check your owner’s manual or online for your specific make.

The consensus is, 30-50 miles remain once the alert first lights up. This will be on the lower end for smaller cars and near the limit for larger trucks and SUVs that aren’t as fuel-efficient. While it’s best not to push the limit, running low may not be as harmful as previously thought. 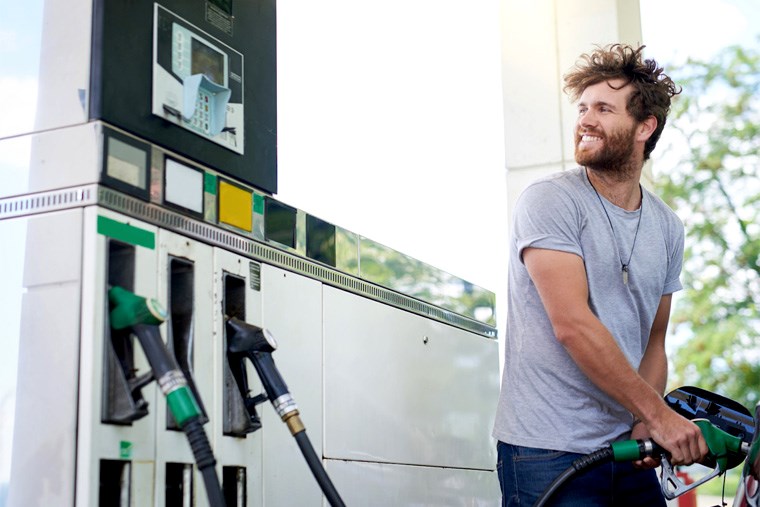 Running on Empty Hurts Your Engine

Some drivers think running on a low tank will increase sediment and other harmful particles entering the engine. While there are some downsides to pushing your vehicle’s range to the limit, long-term engine damage isn’t likely one of them.

Fuel systems are designed to draw gas from the tank’s bottom, ensuring a constant flow and limiting particle build-up. While operating below a quarter tank can add stress to your fuel pump, you won’t be damaging your engine at the same time.

One of the oldest myths around is that manual transmissions get better gas mileage. While this was true when automatic transmissions were new technology, nowadays, the difference is negligible.

Automatic transmissions now have unlimited gear ratios, making them superior to manual transmissions in some cases. There are still advantages to each transmission, but don’t pick one over the other strictly because of fuel economy.

Fill Up When It’s Cold

Another popular tactic is to fill your tank in the morning or when the temperature is at its lowest of the day. People think that because liquids contract in the cold, they can squeeze more fuel into their tanks during this time.

However, almost all stations store fuel underground, and it’s basically unaffected by daily temperature swings. You won’t see any noticeable improvement in range filling your tank in the AM, so retire this tactic and gas up whenever it’s convenient for you.

Maximizing the fuel economy in your ride doesn’t have to be complicated. Properly inflating your tires, driving the posted speed limit, and being conservative behind the wheel are the best ways to take each tank further. Ditch these outdated and unfounded fuel myths, and maximize your fuel economy today.

This story was made possible by our Community Partners Program. Thank you Davis Chevrolet for helping to expand local news coverage in Alberta. Learn more.