'I feel lighter:' Some Albertans thrilled with haircuts, eating in restaurants 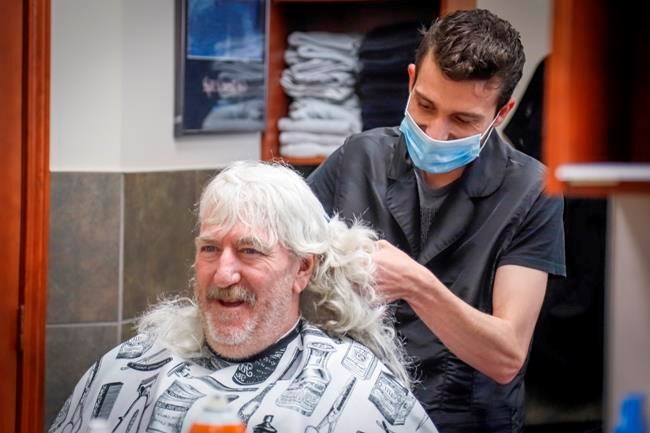 Barber Salim Alhaj, cuts the hair of client, John Gee, of Calgary, who came to the Kingsview Barbershop on its re-opening in Airdrie, Alta., Thursday, May 14, 2020, amid a worldwide COVID-19 pandemic. THE CANADIAN PRESS/Jeff McIntosh

Alberta's relaunch of its COVID-compromised economy Thursday was busy in some spots, slow in others and overshadowed by different rules for different communities.

Retailers, barber shops, hair salons, daycares and restaurants were all given the go-ahead to reopen given that the province is flattening the curve on COVID-19 infections.

But Premier Jason Kenney announced Wednesday that eateries and salons in Calgary and Brooks, to the southeast, would have to wait until May 25 because the two communities have three-quarters of the province's active cases.

Alberta now has 1,131 active COVID cases and 65 people hospitalized, 10 of whom are in intensive care. There have been 121 deaths.

Calgarian John Gee drove just north of the city's limits to Airdrie to get his long locks sheared for the first time in four months.

"Everything's closed in Calgary so I came here. It's my birthday this weekend, so I've got to look half decent," Gee said with a laugh while at the fully booked Kingsview Barbershop in Airdrie.

A 15-person limit on public gatherings remains in force throughout the province and restaurants can open only at half capacity.

A number of customers also gathered at the Boston Pizza in Airdrie. Gary Jackson and three colleagues were at their regular table a minute after the restaurant opened.

"I've got a bunch of friends in Calgary calling me and saying, 'What are you doing?' I said, 'I can't tell you.' Thank God for living in Airdrie," said Jackson.

Calgary Mayor Naheed Nenshi had argued that the strictest rules necessary for any given community should be applied everywhere equally, but said he isn't dwelling on the last-minute announcement.

"Ultimately it's not something worth barking about in a place where we're trying to be kind and everybody's doing the best they can," said Nenshi.

Nathan Newman had been busy preparing for a Thursday reopening at his two downtown Calgary establishments, The Derrick Gin Mill & Kitchen and Unlimited Champagne Lounge.

"We're just going to have to eat the cost and start up again on the 25th, if that's the date," said Newman.

He said much of the money and time spent ahead of the abortive relaunch won't go to waste in the end.

"A lot of it is salvageable for the most part," he said. "It's just more of a tease than anything else. We were really excited."

In Brooks, Margaret Plumtree with the local chamber of commerce said they knew a slower rollout was a possibility, but she would have liked to have seen better communication from the United Conservative government.

"As much as the chamber and our businesses understand the need to keep everyone safe, that (announcement) was very last minute," said Plumtree.

Calgary has been hit hard with cases and deaths in long-term care homes.

NDP Opposition Leader Rachel Notley criticized Kenney for making the delay decision Tuesday night, but waiting until late in the afternoon the next day to announce it.

She said Calgary hair salons and restaurant owners bought supplies and hired staff to prepare for their reopenings.

"I'm calling for this UCP government to reimburse any business that has incurred costs from preparing to open that they now will not be able to recover," said Notley.

In Edmonton, business at the signature West Edmonton Mall was slow to wake from its economic slumber.

At midday, pockets of shoppers, about half wearing masks, browsed through stores, about one in five of which were open. Some stores had staff spritz customers with hand sanitizer when they walked in. Others posted signs limiting in-store shoppers to varying totals: 15, 16, 20, 22, 29.

There were new signs posted everywhere in all the primary colours of the rainbow: blue arrows on the floor to keep shoppers apart, yellow tape around every second table in the food court to keep eaters distanced and red Xs on public benches to discourage sitting.

Every few minutes, a recorded message played over the mall's intercom system reminding shoppers to keep their distance, signing off with: "We're all in this together."

This report by The Canadian Press was first published May 14, 2020

— With files from Dean Bennett in Edmonton