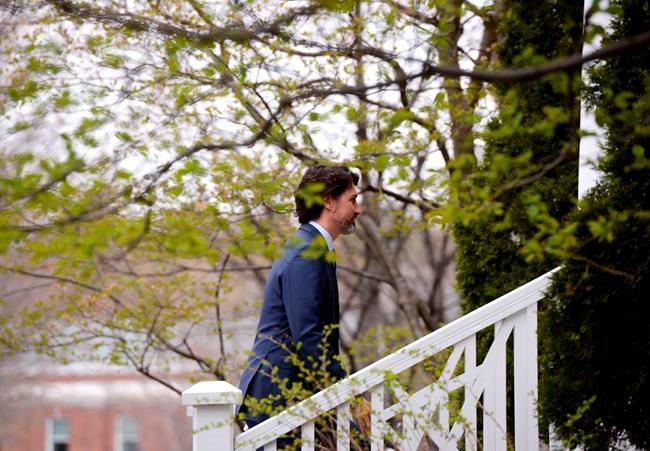 Prime Minister Justin Trudeau holds a press conference at Rideau Cottage during the COVID-19 pandemic in Ottawa on Friday, May 15, 2020. THE CANADIAN PRESS/Sean Kilpatrick

Editor's note: Story has been updated throughout

TORONTO — Amid still rising COVID-19 case counts and further signs of the economic devastation caused by the pandemic, Prime Minister Justin Trudeau on Friday announced that businesses can take advantage of emergency wage subsidies until the end of August.

One indication of the impact of the measures aimed at fighting the novel coronavirus was seen in the 57.6 per cent plunge in Canadian home sales in April compared with a year ago to levels not seen in almost 40 years.

Another sign came from Ontario's fiscal watchdog, which reported about one in three workers in the province had been affected by the economic shutdown. The Financial Accountability Office released a report saying an estimated 1.1 million workers had lost their jobs — and just as many had their hours sharply reduced — because of the pandemic.

In announcing the wage-subsidy extension, due to have ended next month, the prime minister pleaded with business owners to hire new workers or rehire old ones to help get the sputtering economy moving again.

"Please take confidence from this announcement," Trudeau said in Ottawa. "You now have some runway to catch your breath as you get restarted, so please, bring back your employees."

Overall, Canada has seen more than 74,500 confirmed COVID cases and at least 5,550 deaths due to coronavirus disease. Quebec, the province hardest hit by COVID, reported its total caseload had climbed reasonably slowly — to 41,420 an increase of 696. However, 50 more people had died, pushing the provincial total to 3,401.

Ontario also reported 27 more coronavirus deaths on Friday, bringing its total 1,825 amid another modest 1.6 per cent increase in overall cases. Nova Scotia said another four people had succumbed in the hard-hit Northwood nursing home in Halifax. The province has had 55 deaths and more than 1,000 cases.

With the long weekend and summer approaching, Montreal said it would transform 200 kilometres of city streets into bicycle and pedestrian corridors. The aim is to allow residents to get out and about amid public health rules. Mayor Valerie Plante said the fight against the epidemic had transformed travel in Montreal.

"It will be a very different summer for all of us," said Plante, whose city has been the epicentre of the pandemic in Canada.

While several provinces reported no new cases, one of them, Newfoundland and Labrador, became the latest to say its schools will stay closed for the rest of the academic year. Education Minister Brian Warr encouraged students to continue with their studies online, and said the province was developing plans for when schools reopen in September.

In British Columbia, parents were being given the choice of allowing their children to return to class part-time in June, while Yukon Premier Sandy Silver was set to announce a comprehensive reopening plan. For now, only residents and a few others are allowed to enter the territory.

Provinces looking to reopen their economies, Trudeau said, must sharply boost and co-ordinate testing for coronavirus and contact tracing for those infected to contain future outbreaks.

The prime minister also announced financial support for thousands of medical researchers whose work is unrelated to the COVID-19 crisis and who face layoffs. The 15,000 researchers at hospital-based institutes didn't qualify for the wage subsidy.

Trudeau, however, said the current system was working well.

Ontario Premier Doug Ford, who urged social distancing over the long weekend, reassured people worried about grocery shortages that supply chains were strong. "The key is everyone only buys what they need," Ford said.

-With files from Canadian Press reporters across the country

This report by The Canadian Press was first published May 15, 2020.