“We know we’re not out of the woods yet. We’re wanting to continue to support safety measures and keeping people safe, and remain welcoming and open.”
Nov 23, 2020 8:45 AM By: Cathy Ellis 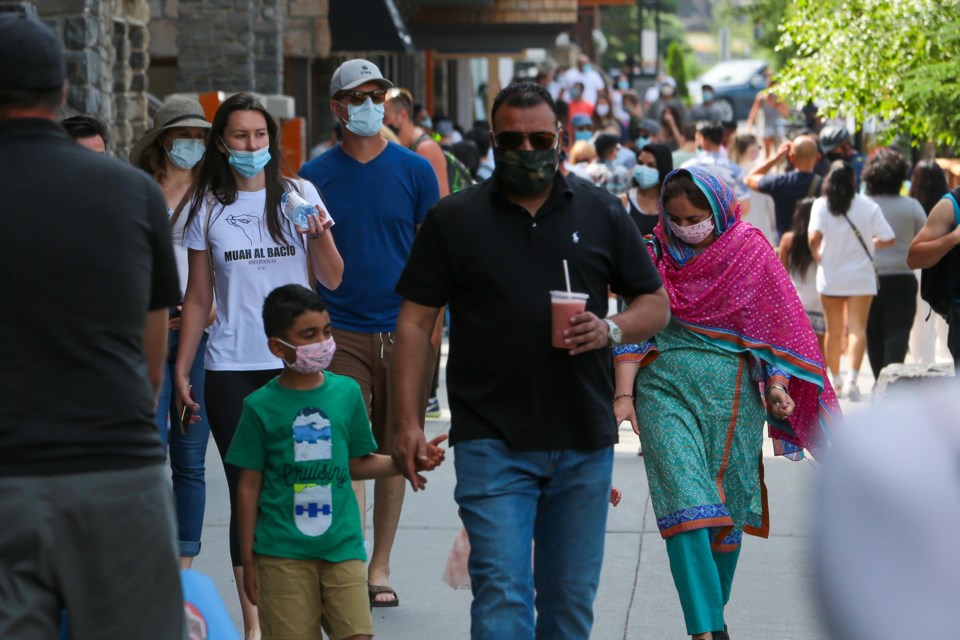 BANFF – The tourism industry is working hard to keep Banff and Lake Louise safe and open this winter in the face of soaring COVID-19 numbers province-wide.

The economic task force, made up of tourism, Town of Banff and Parks Canada representatives, continues meeting to ensure a safe environment for residents and visitors, while helping businesses and services stay open in these quieter months.

However, task force members say they believe more work is needed through the winter – a critical time for businesses – and beyond, as the crisis continues to present significant risks to the communities.

“We know we’re not out of the woods yet,” said Leslie Bruce, president and CEO of Banff and Lake Louise Tourism (BLLT), after the release of the task force's early report earlier this month.

As of Tuesday (Nov. 17), there were 50 positive COVID-19 cases in Banff and Lake Louise; however, the numbers are likely to continue to grow given the escalation of active cases in the province which were at 10,068 at the time the Outlook went to press.

Banff National Park, along with neighbouring Canmore, is on a long list communities in Alberta on enhanced status.

In all, Banff National Park has had a total of 70 reported positive cases since the pandemic hit Alberta in March. Twenty people have recovered from the virus.

Bruce said that having a low number of COVID cases throughout the spring and summer, with no outbreaks, can be attributed in part to Banff and Lake Louise’s success in reopening of the local economy.

The COVID-19 pandemic has affected the tourism industry to an unprecedented level.

On March 16, Canadian borders closed to visitors, and the Alberta government quickly encouraged people to stay home and not travel unless it was essential.

The province, along with the country and many other places across the globe, went into lockdown, and the Town of Banff started turning away visitors who were heading to the mountains for an escape.

Thousands of individuals in Banff – more than 80 per cent of the local workforce – were immediately out of work as businesses and services were required to close.

Tourist attractions were all shut down, including ski resorts, gondolas, and hot springs, and trails and day-use areas in the national park were not accessible.

Activities seen to have a high risk of transmission were closed, including restaurants, retail shops, tours, museums and galleries, entertainment and events. For more than eight weeks, only essential services such as food and supplies were available for residents.

With Banff as a stopping point on the Trans-Canada Highway, gas stations and some hotels remained open to support people travelling between provinces, such as emergency workers and essential services. Some hotels maintained blocks of rooms in case the community needed isolation space, especially for people in shared accommodation.

When it was time to come out of lockdown, the economic task force began working to deliver a phased plan to safely and effectively reopen the local economy to visitors in Alberta and other provinces.

Officials say a big part of visitors feeling safe was due to the downtown pedestrian zone, which provided more space for people to move about, and a bylaw mandating masks be worn both inside publicly accessible places and outside on Banff Avenue.

Bruce said Banff National Park, and its communities, have been widely heralded for the approach to safely welcoming visitors back while keeping the community safe.

“We took the approach of people first, safety first,” she said.

Officials say the strong reputation Banff and Lake Louise earned as a safe place to visit is also thanks to the hard work and commitment of businesses to establish the highest possible safety standards.

According to the task force, there were no business closures due to health guideline infractions and minimal complaints submitted for non-compliance of health and safety requirements.

“People invested a lot of time, but also frankly, a lot of money in adapting their businesses to be safe so that they could remain open,” Bruce said.

“Nobody wants to have to go backwards … people took that so seriously and have gone above and beyond in order to deliver on or above the Alberta health standard.”

Bruce said the federal wage subsidy extension until June 2021 has made a big difference for many businesses, however there have been four or five businesses in Banff that have permanently closed to her knowledge.

“There are some other businesses that are choosing to close for the season, or close for a short amount of time,” she said.

“I really do think it will come down to what are the prospects in the New Year, of how well can we do through this winter.”

Outdoor activities in the national park and nature experiences clearly appealed to many visitors during the pandemic, often as an escape from urban living and COVID-19 anxiety. Bruce said it is fortunate that the local ski hills have been able to open, adding that people feel safer when outside.

“I think that the early indicators from the season pass sales would say that people are wanting to ski or planning to ski,” she said.

“I do feel optimistic or hopeful that we will see people spending time in destination and really supporting the businesses in the community, but really time will tell.”

According to Tourism Economics – in its work with Destination Canada and Travel Alberta – a return to 2019 economic levels is not anticipated until at least 2024.

Bruce said hotel occupancy ended up being much better than initially predicted, sitting around 50 per cent full by the end of the summer, well above the roughly 10 cent occupancy seen in major centres across the country.

“I think that’s a huge win and a demonstration that there is economic activity here,” she said.

“That overnight visitation translates into eating out, shopping and having experiences within destination, and I think it goes a long way in visitors, or customers, saying ‘I feel safe here.’ ”

“We know many residents and businesses have experienced a very difficult year that should not be forgotten as we move into a period of uncertainty with slowing visitation, at the same time as there are COVID outbreaks in Alberta and Canada,” she said.

“One thing is certain: rebuilding the economy will occur over the long-term and we need to remain vigilant about keeping Banff National Park safe.”

On Nov. 17, the mayor told Mountain FM that most knew that at some point an escalation in cases was possible and perhaps even likely to happen.

"I want to really stress that our businesses are doing a really good job keeping their workers and customers safe, and we are working with them now so that they can meet and understand the new enhanced measures in order to stop the spread," Sorensen said.