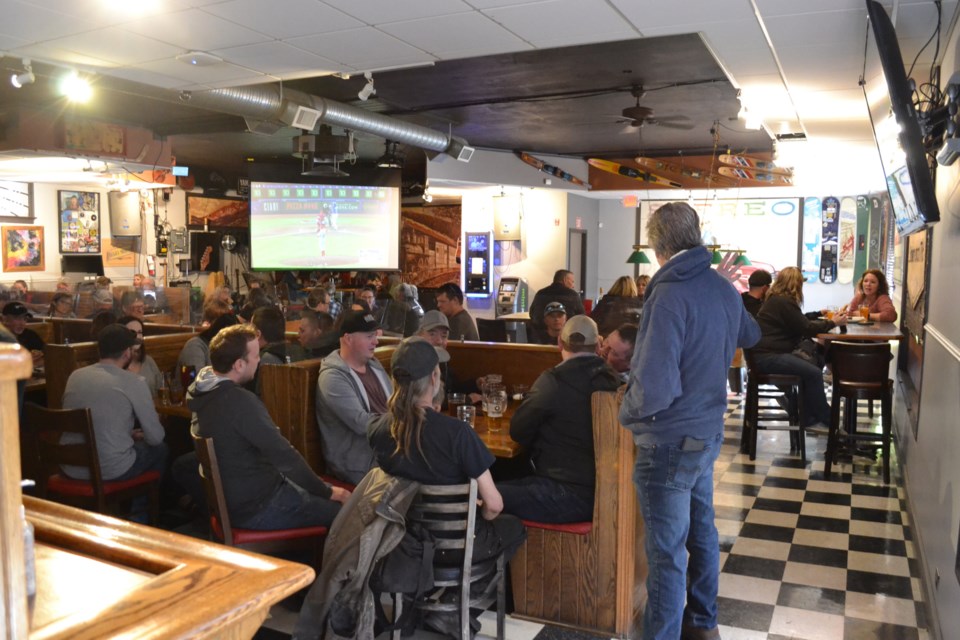 "We had to financially. It’s the third lockdown,” Scott said.

“The first lockdown cost us 11 kegs of beer we had to dump down the drain. Each time, we lose produce and it’s extremely expensive to open back up.”

Besides, he added, “as far as I’ve being told, the Charter of Rights allows me to stay open.”

When asked if he received that Charter advice from a lawyer, Scott said, “Correct.”

It's a question of fairness, he indicated.

Like other restaurant and bar owners interviewed by The Albertan, the van de Pypekamps said not only are they hurting financially but so are their employees.

“Our staff live month to month," Scott said. “It is not a high-paying job. We have staff members that, when they go on EI, there’s always a time lapse and they’re forced into not being able to pay for their rent.”

Scott said he had hoped several other restaurants would follow his lead and for a while it appeared that they would.

However, he said on Thursday after some announced their intention to open for dine-in service they were approached by “different authorities claiming that our licences will be removed.”

Scott quoted from a document on his phone which he said was the Charter of Rights and Freedoms.

“Any law that is inconsistent with the Charter is of no force and effect," he read out.

“Therefore, any measures taken by you to compel compliance by means of instigating confrontation, threats to revoke my licence, harassment in an attempt to demean, humiliate and coerce, attempt to seize my property, issuing fines, will be met with a human rights complaint and/or potential criminal charges against you.

“I will hold them personally accountable and responsible for the cease and loss of my income and my ability to provide food and shelter for my family.”

“There’s not data saying -- they’re not telling us. Where’s the data that says it’s coming from this place and we need to shut down? Why aren’t they targeting the places they can prove it comes from?”

"Why aren’t we going into a full lockdown if it’s that bad where we stop it? Three weeks from now, everything shut down, we would be in a way better situation just putting out little fires and hot zones,” Scott said.

“We’re in rural Alberta. I don’t feel that we should have the same rules as the hot spots in the big centres.”

The van de Pypekamps have heard the argument that if you allow different COVID restrictions in different parts of the province, people will flow from the so-called “hot zones” in big cities to rural areas to congregate in restaurants or other venues.

"Yeah. But when you look at the recovered cases, like it’s just crazy. Olds has had how many cases? And how many deaths,” Brittney said.

“Like, you’re killing people and their livelihoods -- for what? And it’s very unfortunate when people pass away – absolutely, but you’re killing a lot more people with taking everything away from them.”

Scott said musicians have been hurt hard financially by the pandemic and he feels “extremely terrible” about that.

“In all of this, I also feel for all the musicians," he said. “They have been out of work for over a year. They are silent about it. They aren’t complaining. It breaks my heart to know that their livelihoods have been stripped.

“The musicians, all I’ve seen them do is provide us with entertainment, selflessly providing.

“That industry, when it opens back up, needs the support of everybody because it is a struggling industry as well,” he said.

Some venues installed plexiglass to keep musicians and crowds safe. Scott said Tracks chose not to do that and didn’t stage any shows.

Scott said they had a great crowd on Friday.

“I’d love to thank our customers for their support,” Scott said. “It’s been overwhelming.”

“We have been made aware that there are some businesses that have indicated that they are going to remain open,” Heather Holmen, a spokesperson for AGLC, said Friday. “We will be looking at the liquor licensing aspects of that. Inspectors are actively monitoring all the time.

“I can’t confirm if there will are ramped up efforts, but certainly it’s ongoing.”

Effective at noon on April 9, it is unlawful for any restaurant, pub or lounge to conduct in-person, indoor customer service. Patios are still permitted, as is takeout and delivery.

AGLC inspectors will be responding to complaints and will also be conducting routine inspections, said Holmen.

“Any type of formal complaint that has been registered to AGLC, whether its phone call, an email, or through our website, will be looked into to ensure that there is compliance with the legislation and policies,” she said.

Asked if AGLC is encouraging people to call in complaints, she said, “I wouldn’t say we are encouraging but certainly anyone who is concerned that a liquor licence establishment has not complied with public health orders they are welcome to submit that information.”

Inspectors can issue warnings, fines and/or pull licenses, she said.

“For the most part the inspectors’ first role of business is to treat it as an education opportunity, (saying) ‘These are the current public health orders and this is where you are not complying’.

“If they have received several warning or notifications it could result in a sanction against them. And if that’s the case there are other steps that can be followed, including requesting a board hearing and/or monetary fines.”

Pulling licences is “always a possibility,” she said.

“It’s circumstantial and I think mostly the main focus right now is ensuring businesses are complying with the public health orders for the safety and wellness of employee and patrons of those establishments and in the community, including the inspectors who are going around having to navigate some of these issues that are arising,” she said.

“There are regular routine inspections that are carried out, and there are also investigations done in response to complaints that are received,” she said.

She said AHS had been made aware of the fact that some business in the district may remain open for in-person, inside dining after April 9..

The Central Zone includes towns in this region, including Olds, Innisfail and Sundre.

About the Author: Doug Collie