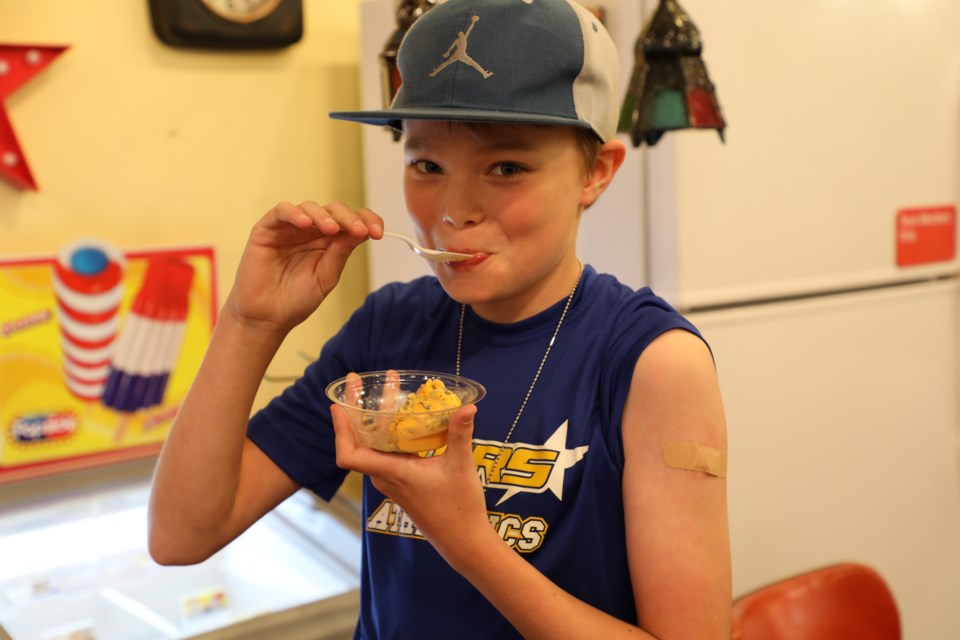 Cole Bohachyk enjoys an ice cream after getting immunized at Midtown Apothecary. Karen Moak, the owner of the pharmacy, said they have had an overwhelming response from the public with regards to vaccinations. JESSICA NELSON/St. Albert Gazette

Flu shots became available across the province on Oct. 19, and pharmacists have been overwhelmed by public response for vaccinations.

The vaccines are being offered free of charge, as per usual, but Alberta Health Services isn't offering them through large public health clinics this year. Health clinics are only available to children under five and their families through appointment. Everyone else is required to get the vaccinations at a pharmacy or through their doctor. This is being done to limit the spread of COVID-19.

Nicole Schettler, a pharmacist at Remedy’sRX, said they have seen a huge increase in demand for the flu shot.

“We have had incredible uptake this year. I think over the course of last year, we gave out just under 297 doses total. We are already well above 350 this year,” she said.

Schettler said there are two reasons why they’ve seen an increase. Everyone who would normally go to a flu clinic is being directed toward their offices, and people are also looking for preventative measures in response to COVID-19.

“It's a good tool in our toolbox. And then, with people having to stay home from work or school at the first sign of any sort of symptoms, they can at least hopefully cut their chances of it being the flu,” Schettler said. “And hopefully they’ll miss less work or school as a result.”

The government ordered a record 1.96 million doses of the vaccine this year, or enough to vaccinate 45 per cent of the population. Last year, 33 per cent of Albertans were immunized or about 1.4 million people.

The government is recommending people get immunized to keep flu counts low.

“The flu shot won’t prevent COVID-19, but it will reduce your chances of getting others sick,” stated Alberta Chief Medical Officer of Health Dr. Deena Hinshaw in a press statement.

The flu, a contagious respiratory disease, is caused by a virus that affects the nose, throat and lungs. It lowers the body's ability to fight other infections and can lead to other complications.

Influenza can be dangerous for those at risk, such as seniors, children under four, and those with compromised immune systems. Alberta saw 1,595 hospitalizations and 41 confirmed deaths from the flu virus last year.

“Flu is still a big public health issue, and I think it often gets overlooked. This year, obviously, we really need to try and keep the capacity in our hospitals open so that we can deal with other things such as COVID or other emergencies that still happen,” said Schettler.

There are a few things that people should be aware of when getting the vaccine, Schettler explains. Kids who are under the age of nine and have never had the vaccine before need to get two shots, at least eight weeks apart.

Pharmacists aren’t offering publicly funded nasal spray vaccines this year, but families can pay out of pocket for the spray. High-dose vaccinations aren’t generally available either as they have been allotted for long-term care facilities.

Schettler said the shot they are offering, even though it isn't high-dose, is still an excellent vaccine.

The flu shot is good for about a year and effectiveness peaks around two months after immunization, which is why people are encouraged to get the shot in October, as a preparation for the holiday season.

Schettler said even if you’ve already had the flu, you should still get immunized as there are many different strains. She also said it is possible to catch the flu after receiving the shot.

“It's generally a milder illness with less complications,” Schettler said. “Even if you've had the flu shot in the past and then got the flu, it's still better than not having the flu shot. Because it does kind of prep your body to deal with it. And generally, severity is much less.”

The flu shot isn’t the only way to prevent flu illness. Hinshaw is recommending people use methods that have become all too familiar during the pandemic to prevent the spread of the flu virus.

“While getting immunized helps, it’s also crucial to wash your hands often, cover coughs and sneezes and stay home while sick,” said Hinshaw.