Glen Carritt carries on Innisfail mayoralty quest with no regrets 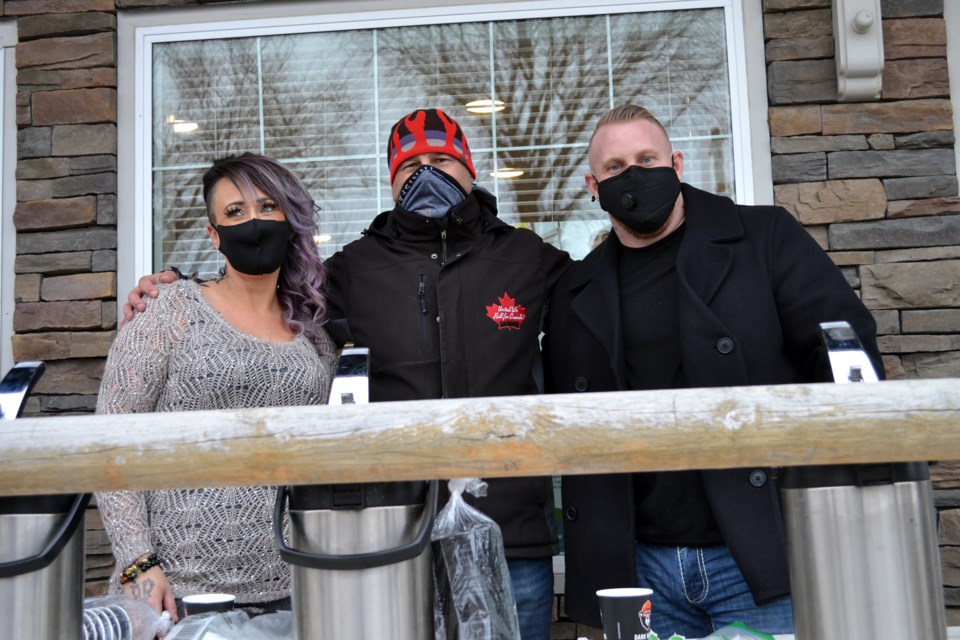 Glen Carritt, centre, with Bladez 2 Fadez Barbershop co-owners Yanik Brazeau, right, and Natalie Klein at the support rally on Jan. 12. The former town councillor, who resigned from council on Jan. 11, is continuing his run for mayor in the next general municipal election. Johnnie Bachusky/MVP Staff

He was shaking hands, talking to supporters, and even politely giving engaging interviews to the media, including The Albertan.

He was proud of the fact up to 50 supporters came to the morning rally at various times, and peacefully made their message known that small business needs more government support and not prolonged lockdowns.

The barbershop re-opened its doors against current pandemic restrictions shortly before 10 a.m. and welcomed a stream of happy customers without any interruptions from law enforcement or health authorities. However, early in the afternoon an Alberta Health Services inspector came to the business with the RCMP and placed a closure warning notice on the front door.

“There is a lot of peaceful people here. There’s no concern about anything being violent because these people came out to support this business,” said Carritt. “And this is what Alberta is about, and that is supporting small business. I hope (co-owner Natalie Klein) can move forward and keep her business open.”

Carritt, who resigned as town councillor the night before, made it clear he’s still seeking the mayor’s chair this coming October, and will continue his quest to lead in the community – especially small business, no matter what challenges are in front of him.

“What I don’t understand is why the rest of town council didn’t reach out to me before going to the newspaper and say, ‘you know what? We need to write a letter to Premier Kenney and move forward Glen. You are on to something here and we need to get behind this,” he continued. “But they were really quick to run to the paper.”

He said not one council member, including the mayor, called him personally to voice their concerns following The Albertan’s online publication last weekend of a story outlining his support of the barbershop’s decision to re-open on Jan. 12 in defiance of provincial COVID restrictions.

“I really feel that if (council members) felt the lines were blurred a little bit, a phone call, some team building, some mediating, whatever needed to be done, could have taken place,” said Carritt.

On Monday afternoon (Jan. 11) town council confronted Carritt at the start of its regular meeting, with the mayor and others pointing out he could be held in violation of the Council Code of Conduct Bylaw, as well sections under the provincial Municipal Government Act. Carritt handed in his resignation within 30 minutes of the meeting.

The following day, the Town of Innisfail issued a news release on Carritt’s resignation, noting council’s authority and decision-making powers are regulated by the Municipal Government Act and through municipal bylaws, and “not with any individual member.”

Nevertheless, Carritt told The Albertan towards the end of the Jan. 12 rally he felt “hurt” by council’s treatment.

"Yes, I honestly feel like I've been bullied in council," said Carritt. "They continue to go straight to code of conduct instead of team building and mediating and yes, it's hurtful. I enjoy council. I feel like I am making a difference in this town, and that showed by all the support I am getting online, and all the support we got at this support rally. Yeah, it hurts. I wanted to continue.”

In the meantime, as Carritt continues on with his long mayoralty campaign and his ongoing support for small business, he said he remains undaunted with no regrets.

“No regrets at all. The council that we had wasn’t working together cohesively at this point, so something needed to change and whether you are right, wrong or indifferent, if you feel like you’re the one that’s not being supported then at some point you need to bite the bullet and decide what is important,” he said. “What was important to me was standing up for small business.”

About the Author: Johnnie Bachusky