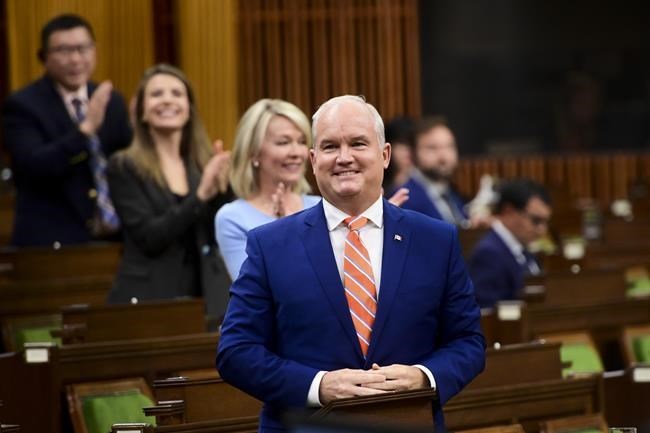 Conservative leader Erin O'Toole stands during question period in the House of Commons on Parliament Hill in Ottawa on Wednesday, Sept. 30, 2020. THE CANADIAN PRESS/Sean Kilpatrick

Financial reports filed Friday with Elections Canada show that all the main parties — except for the governing Liberals — raised more money in the third quarter of this year than they did in 2018, the last non-election year.

Indeed, the Conservatives boasted that they had their best ever third-quarter fundraising results for a non-election year.

The party raked in nearly $5.7 million from July to the end of September — almost $1 million more than the Conservatives raised during the same period in 2018.

Almost $464,000 more was pulled in by candidates in the Conservative leadership race, which ended with the selection of Erin O'Toole in late August.

Another $237,000 was raised in this year's third quarter by candidates in the Green leadership race, which culminated Oct. 3 with the selection of Annamie Paul.

All the parties shut down in-person fundraising events after COVID-19 began sweeping Canada in mid-March. Second-quarter fundraising dipped as a result.

The Liberals, Conservatives, NDP and Greens all took advantage of the emergency wage subsidy program introduced by the Liberal government to encourage employers to keep workers on their payrolls during the pandemic.

The Conservatives have since stopped collecting the 75 per cent subsidy and have said they'll pay back whatever they received.

The Liberals also stopped applying for the subsidy at the end of August but have not promised to reimburse.

The NDP and Greens have indicated they intend to continue taking advantage of the benefit to avoid layoffs.

This report by The Canadian Press was first published October 30, 2020.