Departmental officials will start consultations and keep them going even during an election campaign, said the employment minister.
Jul 21, 2021 3:15 PM By: Canadian Press 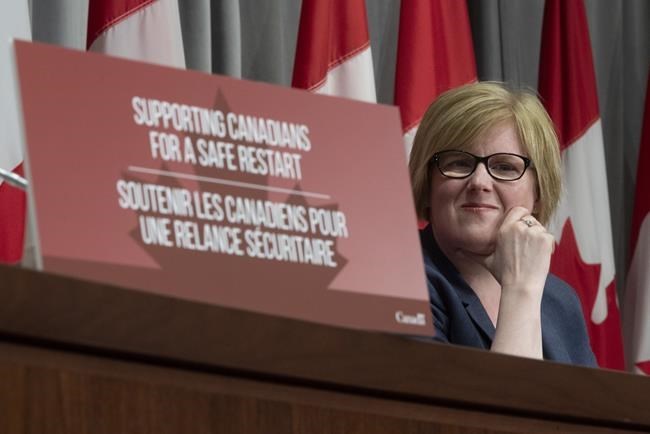 Employment, Workforce Development, and Disability Inclusion Minister Carla Qualtrough listens to a question during a news conference on Aug. 20, 2020, in Ottawa. THE CANADIAN PRESS/Adrian Wyld

OTTAWA — Employment Minister Carla Qualtrough says a planned review of the sprawling employment insurance system will go ahead even if the country is plunged into a federal election campaign.

Qualtrough said consultations will start next month on how the decades-old system can be modernized after its shortcomings were exposed by the COVID-19 pandemic.

But looming over the consultation call is an anticipated federal election that labour and business groups have worried would kibosh the long-sought review.

Speaking to The Canadian Press, Qualtrough said departmental officials will start consultations and keep them going even during an election campaign.

She added that the government doesn't want a review to last for years, saying that the consultations will focus on a few key issues.

Among the issues to be looked at will be who can access the benefit system, whether the value of benefits need to change, and how to pay for any changes given employers and workers fund EI through premiums tied to paycheques.

This report by The Canadian Press was first published July 21, 2021.