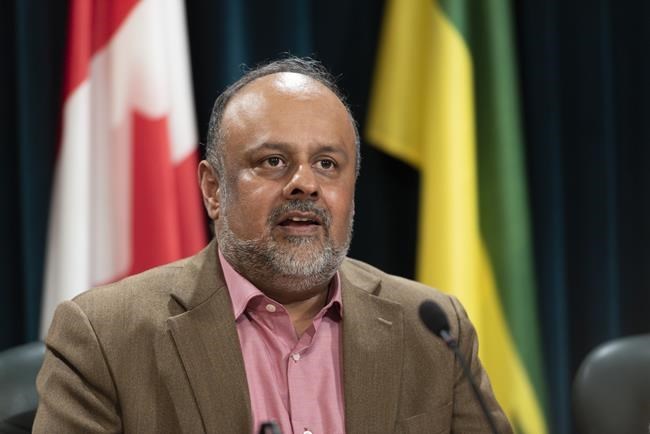 Saskatchewan's Provincial Chief Medical Health Officer Dr. Saqib Shahab speaks during an update on COVID-19 at the Legislative Building in Regina on Wednesday March 11, 2020. Health officials in Saskatchewan are no longer cautioning against non-essential travel to northern Alberta. THE CANADIAN PRESS/Michael Bell

REGINA — Health officials in Saskatchewan are no longer cautioning against non-essential travel to northern Alberta.

The advisory was put in place in April after cases of COVID-19 in northern Saskatchewan were linked to travel in northern Alberta, with an outbreak at an oil sands facility near Fort McMurray.

The Saskatchewan Health Authority says officials in Alberta report that outbreak is over.

Health officials are still encouraging people travelling between the areas to take precautions and get tested if they develop symptoms related to COVID-19.

Saskatchewan's far north region has been one of the areas hit hardest by the virus and is reported to have 47 active cases.

So far, the province has seen 785 total cases; 684 people have recovered and 13 have died.

This report by The Canadian Press was first published July 2, 2020

Giving back to the community core philosophy of Two Pharmacy
Aug 7, 2020 7:00 AM