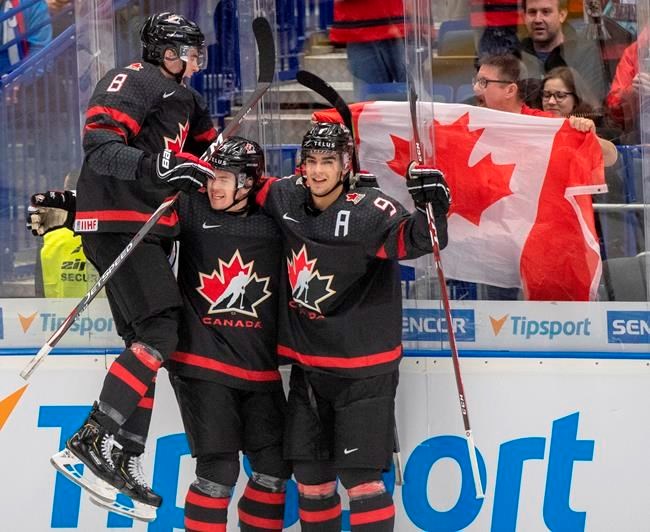 OSTRAVA, Czech Republic — If there was even a shred of lingering doubt in Alexis Lafreniere's mind about the health of his knee, he took care of it quickly.

Having missed the last two games after crumpling to the ice and grabbing his left leg in agony last weekend, Canada's star winger pasted an opponent into the glass with a solid check on his first shift Thursday.

And once the team killed off a questionable five-minute major early, Lafreniere and the rest of his country's highly-skilled teenage roster went to work.

The projected No. 1 pick in the 2020 NHL draft returned from injury to set up the opening goal before scoring one of his own on a bullet shot, propelling Canada into the semifinals at the world junior hockey championship with a 6-1 victory over Slovakia.

Lafreniere's participation at the under-20 tournament looked to be in serious doubt as he was helped off the ice last weekend following an awkward fall.

Now it's game on with Canada two wins away from its 18th gold medal.

"It's really nice to have him back."

The Canadians will meet Finland in one of Saturday's semis after the defending champions upset the United States 1-0 in a rematch of last year's final.

Lafreniere suited up against Slovakia after missing last two games with the knee injury suffered in a humiliating 6-0 setback to Russia, the national program's worst defeat in the under-20 tournament's 44-year history.

But the 18-year-old from Saint-Eustache, Que., who has 70 points in 32 games with the Quebec Major Junior Hockey League's Rimouski Oceanic, watched practice less than 24 hours later minus a knee brace or noticeable limp.

"It was scary a little bit," Lafreniere said. "But after I felt good."

The reigning CHL Player of the Year took part in Canada's skate Wednesday before the official all-clear was announced a few hours later.

"He looked like he was back to himself again," said head coach Dale Hunter.

Asked about Lafreniere's physical side, the veteran of 19 hard-fought NHL seasons said it's an underrated part of his game.

"No one thinks that he does that," Huter said. "He scores, he gets points. But he finishes checks, plays the right way."

Oliver Okuliar replied for the overmatched Slovaks, who had been shut out in their last three games against Canada at the world juniors. Samuel Hlavaj allowed six goals on 30 shots before getting the hook early in the third period.

Most observers believed the Canadians would automatically get a semifinal rematch with Russia, which beat Switzerland 3-1 earlier Thursday. But they instead had to wait to find out their next opponent because the International Ice Hockey Federation recently changed its medal-round format — and neglected to update the official website — to a setup that sees teams reseeded based on rankings at the event.

In the day's other quarterfinal, Sweden defeated hosts Czech Republic 5-0 to book a date with the Russians on Saturday.

Lafreniere started on Canada's top line with Hayton and Nolan Foote only to see the latter assessed a five-minute major and a game misconduct for a check to the head/neck area on Slovakia's Kristian Kovacik just 53 seconds in at Ostravar Arena.

But it appeared the Tampa Bay Lightning first-rounder's principal points of contact were the shoulder and upper back of Kovacik, who eventually returned to the game, as the Slovak stretched for the puck.

Sporting their black jerseys for a second straight game, the Canadians killed the penalty, with Hofer making a big save off the rush.

"It was a tough way to start," said Bernard-Docker, an Ottawa Senators' prospect. "But I think it gave our group a lot of energy."

Canada grabbed the lead shortly thereafter when Cozens, who replaced Foote on the No. 1 trio, pressured the puck and Lafreniere passed quickly in front to Hayton for his team-leading fourth goal at the world juniors.

"He's a good skater," Hunter said of Cozens. "He can get on the forecheck. He surprised the defenceman."

Hlavaj — statistically the QMJHL's best goalie in 2019-20 with the league-leading Sherbrooke Phoenix — did his best to keep the Slovaks in it, but Canada scored four times in the middle period.

McMichael bagged his third on a 2-on-1, Bernard-Docker added his first after a nice toe-drag around a sliding defender, and Foudy made a slick move on a breakaway for his third to make it 4-0.

Canada, which suffered a devastating overtime defeat at this stage of the tournament to the Finns in Vancouver last year, then went to the power play, with Lafreniere, who now has six points in just over seven periods of action, taking a pass in the high slot and wiring his second.

"Right away he's making an impact," said Cozens, who had six points of his own in Canada's last two games. "He's always a threat."

"Sometimes you're shaking your head at the stuff he can do," Bernard-Docker added. "It's really special."

Canada scored its sixth one minute into the third on another man advantage when Hayton buried his fifth to end Hlavaj's afternoon. Samuel Vyletelka came on in relief and finished with 14 saves.

Okuliar, who plays on the same line as Cozens with the WHL's Lethbridge Hurricanes, broke the shutout bid when he blasted a shot past Hofer, but there was no dampening Canadian spirits.

"It was a good game for us," Lafreniere said. "I felt good."

He looked even better.

This report by The Canadian Press was first published Jan. 2, 2020.