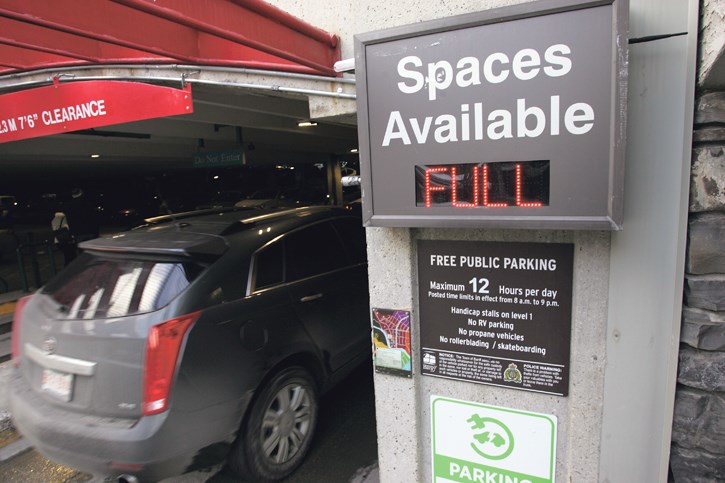 Banff's Bear Street parkade is full as another busy day in the townsite stretches parking resources. Currently, the municipality is exploring paid parking as a method to address congestion issues in the community. Council also voted in December to not pursue a congestion charge option as a way to manage traffic in the resort's busy downtown core. RMO FILE PHOTO

BANFF – Banff’s local politicians have put the brakes on looking into a road toll to deal with congestion in the tourist town.

During a recent service review meeting, council voted 4-2 against spending $15,000 to lobby the Alberta government to be able to institute a congestion charge and another $150,000 for a feasibility study the following year if the province was open to the idea.

“The congestion charge, for today, is off the table,” said Mayor Karen Sorensen.

The concept of congestion charging is to establish an explicit price that is paid by drivers for the use of the road during busy time.

Charging scenarios could be distance, area (travel anywhere inside the area), or cordon-based (crossing a line). They could also be flexible based on time of day, day of the week, time of year.

Town of Banff officials say a review of the Municipal Government Act and Traffic Safety Act determined the Town of Banff doesn’t have the authority to charge a fee for the use of roads.

Stephen Allen, the Town of Banff’s engineering coordinator, said administration would need to lobby the province to change legislation, noting that would be easy from a legal perspective because of Banff’s Incorporation Agreement.

“The only option to move forward should council wish would be to spend some time and effort lobbying the government to grant an exception to the Town of Banff,” said Allen.

“Legally it’s quite simple to do; politically it might be very challenging.”

Councillors Peter Poole and Ted Christensen said the idea was worth pursuing.

“There’s nothing more conservative for market-based interest like our current Kenney government than providing a market-based use of our public roads, “ said Poole.

“This is a good chance for Kenney to show that he’s willing to abide by market principles. Let’s try and proceed with this negotiation.”

But Coun. Grant Canning said he couldn’t see the province being interested in this.

“The carbon tax was a market-based concept as well and I’m pretty sure the provincial government didn’t care for that one very much,” he said.

“I don’t see anything from this provincial government to suggest they will give municipalities the ability to charge their own set fees and their own set taxes.”

Aside from that, Canning said he couldn’t support moving ahead with this idea because the Town of Banff is currently undergoing public consultation on an integrated parking management plan, which includes paid parking and a residential parking permit system.

“If we want to talk about the idea of putting a price on congestion, for me, I would certainly think that council should consider paid parking as being the first option, and perhaps a congestion charge somewhere down the road,” he said.

The aim of a congestion charge is encourage drivers to take other forms of transportation, such as public transit, or to park in intercept lots.

“Examples from around the world demonstrate that congestion charging can be a successful tool to reduce traffic volumes by 10-30 per cent,” according to a report to council.

“A 10-30 per cent reduction in traffic volumes in Banff would significant reduce the number of days during summer where traffic volumes exceed our established congestion threshold volumes.”