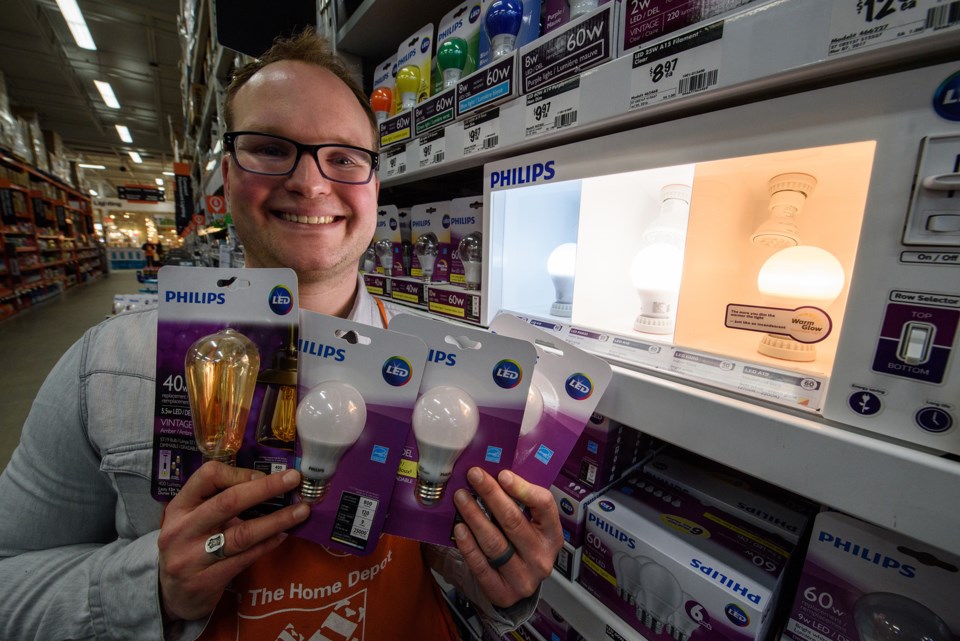 SAVINGS STUMBLE — Alberta saw a significant drop in its energy efficiency rating in a recent report issued by Efficiency Canada. This was in most part to the province's elimination of Energy Efficiency Alberta, which offered many incentives for Albertans to invest in efficient products such as these LED bulbs. JOHN LUCAS/St. Albert Gazette

Alberta has come dead last in the nation when it comes to electricity savings, an Ottawa think-tank has found, and that’s in no small part because we got rid of our energy efficiency agency.

The report found Alberta fell to eighth from sixth place nationally when it comes to energy efficiency, which was the biggest drop in Canada.

Alberta had actually done pretty well in the previous year’s report considering it had just started its energy efficiency efforts under Energy Efficiency Alberta, and was close to the national average in terms of what it saved on electricity, said report co-author Brendan Haley.

“In 2019, Alberta (in terms of) electricity had the lowest amount of savings in the country,” he noted, with its efficiency efforts shaving just 0.06 per cent off its total electricity costs – down from 0.8 per cent in 2017 and far below the two to three per cent seen in leading American states.

Alberta had the second lowest per capita spending on efficiency programs in Canada last year and saw the third lowest amount of savings when it came to natural gas and other fuels, the report found. It also had no energy efficiency targets.

Alberta’s drop was due in most part to its decision to cancel the provincial carbon tax and eliminate Energy Efficiency Alberta, which were the cornerstones of its energy efficiency efforts, the report found. While residents are now subject to the federal carbon tax, they no longer have provincial programs to help them save energy.

There were about $100 million in solar projects awaiting support from Energy Efficiency Alberta when the 2019 provincial election came about, said Clifton Lofthaug, owner of Great Canadian Solar (which has built numerous solar PV installations in the St. Albert region). When it vanished, so did a big chunk of those projects.

Energy Efficiency Alberta’s actions supported about a thousand businesses and generated some $952 million in economic growth, noted Amy Roesler, executive director of the Alberta Energy Efficiency Alliance. Some of its programs have been offloaded to other agencies, but as of now Alberta has no province-wide energy efficiency program available to homeowners.

Alberta would see higher costs and more pollution now that it has cranked back its investment into energy efficiency, Haley said.

“The more energy you waste, the more everyone in the province ends up paying to have to provide that energy.”

Haley said Alberta could get back on track by requiring utility companies to meet a certain percentage of future energy demand through efficiency measures – a practice common in many states and provinces. It could also adopt the federal government’s upcoming building code (which will allow communities to require builders to reach a net-zero energy standard) and require sellers to advertise the energy consumption of their buildings. Alberta also has Property Assessed Clean Energy (PACE) legislation, which could help home and business owners fund building upgrades more easily.

Haley said energy efficiency could help with Alberta’s economic recovery, as it involves a lot of labour-intensive building renovations. A $10.4-billion federal investment over three years into efficiency efforts would add about 175,000 jobs and $42.5 billion to the national economy a year, his group estimated.

Investing in efficiency could also help Alberta’s reputation when it comes to attracting oil and gas investment, Lofthaug said.

“If we’re looked upon globally as laggards from an environmental and energy efficiency standpoint, investment dollars are going to be hard to come by for the province.”

The report can be found at efficiencycanada.org.

Canadian Armed Forces to formally apologize to victims for sexual misconduct
Nov 24, 2020 11:15 AM

About the Author: Kevin Ma