An Airdrie couple has been fined $2,250 for breaking quarantine rules after testing positive for COVID-19 in November 2020.

Tamara Hiltz and her husband Ethan attended court in Calgary on Feb. 17 and pleaded guilty to charges under the Public Health Act for violating an order from the province's chief medical officer of health, according to a report from the Calgary Herald.

Hiltz had published a screen shot of her positive COVID-19 test result to Facebook in mid-November. She then published another post on Nov. 20, upset at the Balzac Costco’s employees for telling her and her family members to wear masks while they were shopping there that day. 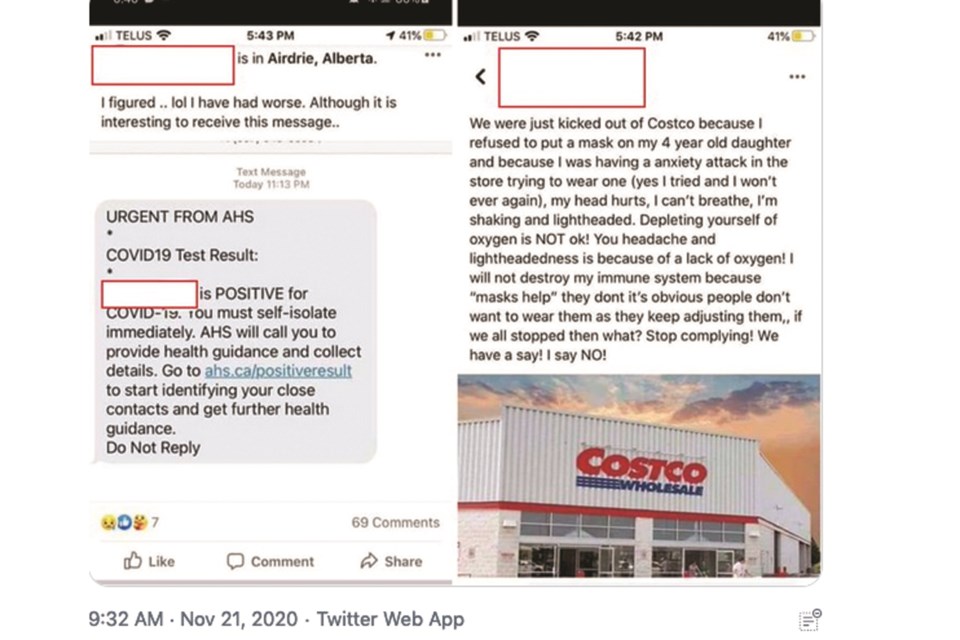 In November 2020, Tamara Hiltz posted to Facebook that she had gone shopping at the Costco in Balzac, just a few days after testing positive for COVID-19. Screenshot/Twitter

According to the Herald’s report, Hiltz was tested for COVID-19 on Nov. 17, 2020, while her husband was tested on Nov. 12. Both had developed symptoms of the virus after Ethan came into contact on Nov. 6, 2020 with a co-worker who had also tested positive.

Reached by the Airdrie City View on Feb. 19, Hiltz said she was under the impression their 14-day quarantine period had ended on Nov. 20, allowing the family to go shopping that day.

“Based on our specific situation and what AHS told us three times they stated we were clear and OK to go out,” she said.

“Our decision to get groceries was because of talking to AHS, who stated we were cleared to go out. Due to previous rumours, we knew no one would be willing to get us a $500 grocery order for our family.”

Hiltz said she and her husband wore masks while they shopped at the Costco, though she claimed she is exempt from wearing them. In her Facebook post, she said wearing a mask gave her an anxiety attack.

“I refused to mask my child because I don’t believe in muzzling children,” she said. “We were treated poorly there [and] followed at every turn. I left because of the harassment from Costco and left my husband to finish shopping while my daughter and I waited in the car.”

On Feb. 17, a provincial court judge handed down fines of $1,500 and $750 for Hiltz and Ethan, respectively. Hiltz’s larger fine was because she also went to Wal-Mart that day.

“I don’t believe it was overly harsh, I believe all of what’s going on is [harassment] in regards to the ‘pandemic,’” Hiltz said. “People are so scared and believe everything they see in the news without question. I am not the only one that thinks this way either.”

“They were quite prepared to risk others’ health and safety by going to box stores with their kids in tow,” Graham said, according to the Herald’s report. “So I’m not buying their excuse.”