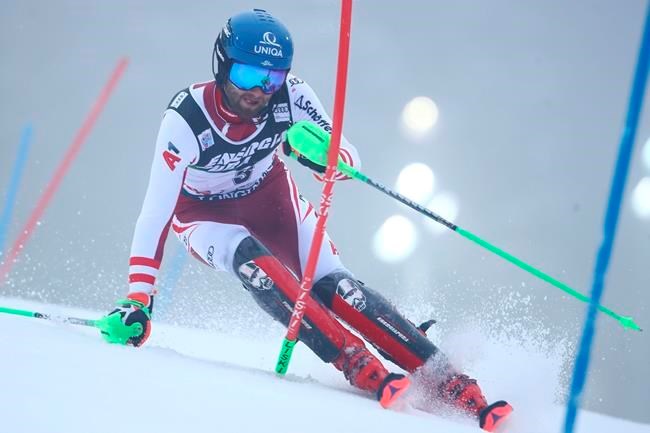 ZAGREB, Croatia — Right after becoming the first German skier in more than three years to win a men's World Cup slalom, Linus Strasser looked up in the air and fought back tears.

He knew the winning feeling from a previous victory in a city event, but not from a slalom.

“I got a little bit emotional. I don’t really realize it,” Strasser said Wednesday after triumphing in the first men's race of 2021.

The previous German slalom winner was Felix Neureuther, who won in Levi, Finland, in November 2017.

Strasser mastered the tricky Crveni Spust course as he improved from eighth place after the opening run to lead a trio of Austrians. He beat Manuel Feller by 0.10 seconds while Marco Schwarz was six-hundredths further back in third. The result sent Feller to the top of the slalom season standings.

Michael Matt was fastest in the second run and climbed from 26th to fourth place.

First-run leader Clement Noel, last year’s winner, posted only the 27th best time in the final run. The Frenchman, seeking his first win of the season, dropped to seventh.

Strasser regretted that the race on the outskirts of the Croatian capital took place without fans, like almost all World Cup events over the last year.

“Normally we have a big crowd here cheering for us and now it’s just us, just the small skiing family,” Strasser said. “It’s mixed feelings but I am really happy for winning my first special slalom event. Not having the fans next to us is weird but, still, the emotions in me are hyped up.”

Competing on the World Cup circuit since 2013, Strasser won a city event in Stockholm four years ago, and he scored two more podiums in that slalom-like format the following year.

His previous best result in slalom was fifth, from a night race in Schladming, Austria, in 2015.

Being edged by one-tenth of a second couldn't spoil Feller's mood after finishing second.

Coming off a season marred by persistent back issues, the Austrian has finished second, fourth and second in the three slaloms this season.

“This is one of the highlights of my career, I always wanted to have one," Feller said. “It's hard to believe for now.”

Kristoffersen shared 10th place with Daniel Yule, 0.70 off the pace.

Alexis Pinturault went to the top of the overall standings after finishing 18th, enough to overtake Aleksander Aamodt Kilde. The defending overall champion from Norway doesn’t compete in slaloms.

The men's World Cup continues with two giant slaloms and a slalom in Adelboden, Switzerland, from Friday through Sunday.