A pair of Okotokians realized hockey dreams when their were names called at the NHL Draft.

Okotoks minor hockey products and former Bow Mark Oilers teammates Gage Alexander, a 6-foot-7 netminder, and Dru Krebs, a puck moving defenceman, were selected in the 2021 NHL Entry Draft on July 24 in the fifth and sixth round, respectively, after strong seasons in the Western Hockey League.

“It’s a huge stepping stone and I still have a lot of work to do and a long ways to go to get to where I want to play in four, five years,” said Alexander, the Anaheim Ducks’ fifth round selection, 148th overall. “But this is awesome and I enjoyed every minute of it with my family and friends and celebrated.

“It’s awesome to see that I have a team that was really high on me this year and now I can look forward to the season in Winnipeg.”

Alexander, who plies his trade with the WHL’s Winnipeg ICE, took in day two of the draft at home with his parents, grandparents and brother and had a good feeling about his connection with the Ducks.

“They were the first team to contact me and reach out after the bubble in Regina,” Alexander said. “They’ve talked me with all the way through the process in my off-season, talking with different head of scouts and goalie coaches and goalie development people.

“I had a pretty good hunch.”

He had a nearly two-hour call with Ducks goalie coach Sudarshan Maharaj, a conversation he characterized as less of an interview and more two goalies talking shop.

"I can tell you that Sudsie (Maharaj) loves him,” Anaheim assistant GM Martin Madden told media. “He's huge, athletic, just on the upswing of his development. He's a year older than most of these guys and took the lead the last half of his team's schedule.

The development path for Alexander went into overdrive inside the bubble.

He attributed his size, confidence and work ethic, over the past two years in particular, as major reasons for his push towards being drafted.

“I feel like with all the work I put in and countless hours at the rink I feel like it was an accomplishment of mine that my whole family could enjoy,” he added.

“I think it was more of a gradual thing for me trying to understand the (WHL) and understand what steps I needed to make for that journey. I was really confident in the bubble in Regina and I just had fun with it this year, I wasn’t really thinking about the scouting and that stuff.

“I didn’t really think that was a possibility for me this year. So I just went out there and played and tried to give my team a chance to win and everything turned out in the end.”

Krebs and Alexander came up through the ranks on a number of prolific Okotoks teams as key cogs in the Bantam AA Oilers’ provincial championship run in 2017 and later skating on the Bow Mark AAA Oilers' 2018-19 squad.

“Dru is an awesome hockey player and an awesome guy and he deserved it,” Alexander added. “I was definitely still watching for him because I knew he was going to go at some point that day. I’m happy for Dru and happy for his family.” 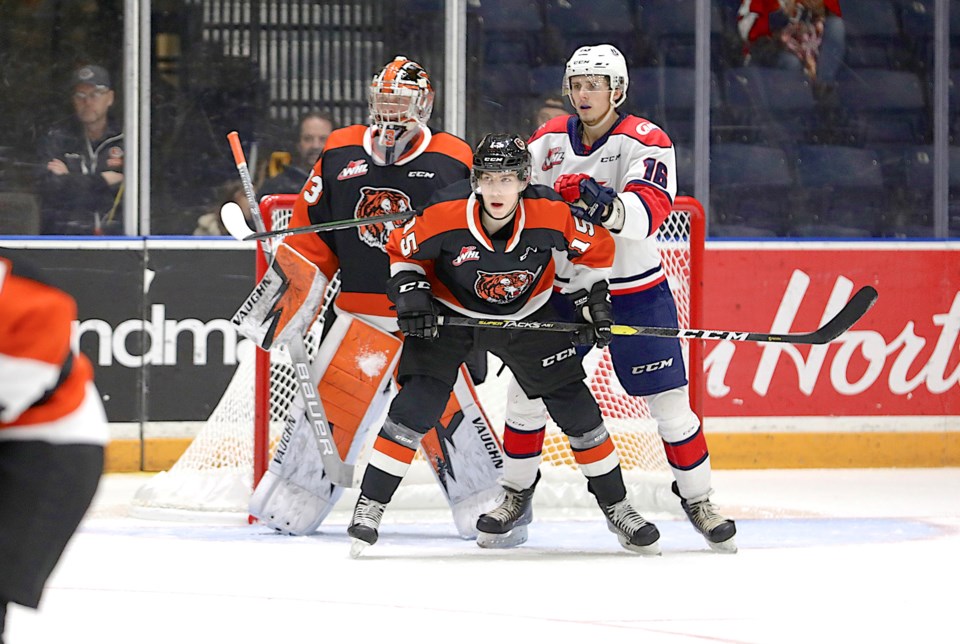 In the sixth round, Krebs was selected 176th overall by the 2018 Stanley Cup champions with his family by his side in Penticton.

“It was a really good feeling and a dream come true as many say,” he said. “I had a couple calls and some questionnaires with (the Capitals) and met quite a few of their guys through Zoom calls.

“So I did have a really good feeling with them, I had a few teams I kept my eye on, including Washington, and that was great to get picked by such a great organization.”

The smooth-skating blueliner, one of four defencemen selected by the Caps on Saturday, tallied 11 assists in 23 games for the Medicine Hat Tigers in 2020-21.

The 18-year-old is two summers removed from another draft experience, getting to witness older brother Peyton’s first-round selection by the Vegas Golden Knights in person at Vancouver’s Rogers Arena.

Getting himself to that stage, albeit virtually, hasn’t quite sunk in.

“Seeing my brother go through it and the emotion behind that was insane, it was crazy to see him walk to the stage, especially with his injury and everything so that was a whole different animal,” said Krebs, who will attend Capitals development camp in early September. “But, doing it myself it almost hasn’t hit me yet, you don’t realize that you’re drafted to the NHL.

“I think once I actually meet the people and I’m there it will actually set in that I’m with an NHL team. Right now I’m really excited and it’s settling in, but it’s hard to actually comprehend that I’m drafted by an NHL team.”

About the Author: Remy Greer

Remy Greer is the assistant editor and sports reporter for Okotokstoday.ca and the Western Wheel newspaper. For story tips contact rgreer@okotoks.greatwest.ca
Read more