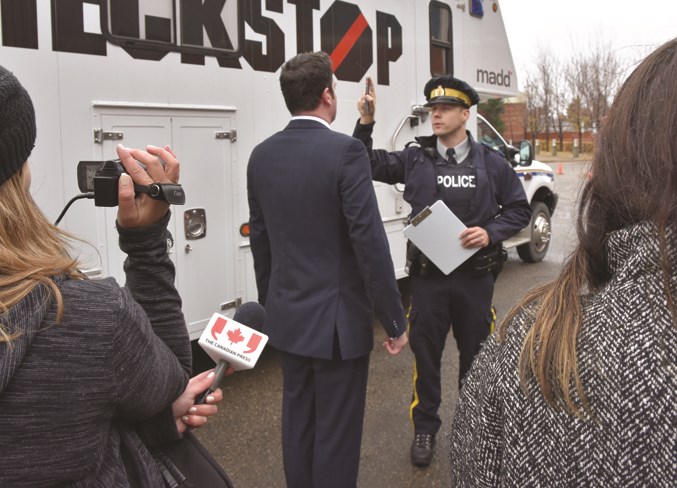 With the Oct. 17 legalization of recreational cannabis, penalties for impaired driving in Alberta have increased significantly. Getting behind the wheel while impaired by alcohol or drugs will now be very costly. Alberta RCMP and Traffic Services held a special media event in Edmonton Oct. 12, during which officials spoke about the impact cannabis legalization will have on enforcement efforts. “Police have used various investigative techniques to determine sobriety since the 1920s,” said Inspector Steve Daley, RCMP “K” Division Traffic Services. “Keeping roads and highways safe for all Albertans has always been a vital part of the provincial policing mandate.” Daley said Alberta RCMP has a goal of ensuring one third of its members are trained to administer the Standard Field Sobriety Test (SFST) by 2020. A first offense will earn a driver an immediate 90-day license suspension and a three-day vehicle seizure. The offender will also be required to take a mandatory driving course and have an ignition interlock put on the vehicle for one year, on top of paying a $1,000 fine. A motorist convicted of a second offense faces 30 days in prison, as well as a 90-day license suspension and a mandatory driving course, and an ignition interlock system will be placed on the vehicle for a year. A third offense lands the driver in prison for 120 days, and he or she will be required to attend a mandatory driving course and have the ignition interlock system on the vehicle for another full year. Under the new regulations, there is zero tolerance for any level of cannabis, alcohol or other drugs being in the bloodstream of someone with a Graduated Driving License (GDL), and a driver found with these substances in their blood will be subject to an immediate 30-day license suspension and a seven-day vehicle seizure. These drivers will also be required to stay in the GDL program for an additional two years and will not be allowed to graduate from that program until they have had no suspensions for a year. Canada amended its impaired driving laws under the Criminal Code of Canada June 21; however, provinces have the ability to set their own regulations under the traffic safety act. The province updated its impaired driving laws April 9. Daley said RCMP is reminding drivers that driving while impaired by any drug – whether alcohol or cannabis or even certain over-the-counter medications – is illegal, and police will enforce the new laws. More information on Alberta’s impaired driving laws is available at alberta.ca