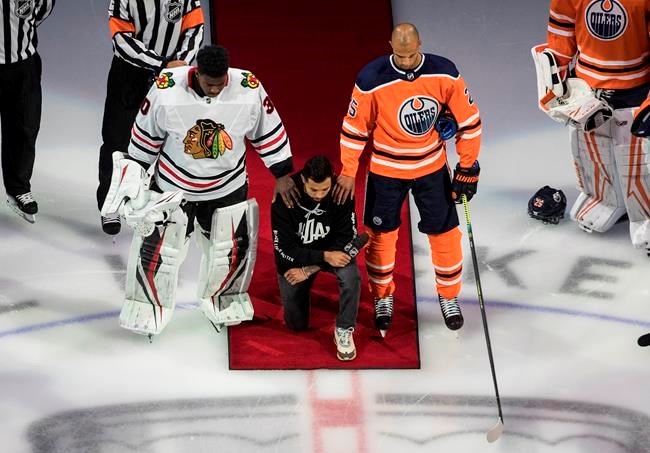 EDMONTON — Minnesota Wild defenceman Matt Dumba became the first NHL player to kneel for a national anthem during the league's restart on Saturday.

The Regina native made a speech about social and racial justice prior to Edmonton's first game of the NHL restart — the second overall — before he kneeled for "The Star Spangled Banner."

Players from the Oilers and Blackhawks stood around the centre-ice circle for both anthems prior to the Edmonton-Chicago game.

Oilers defenceman Darnell Nurse and Blackhawks goalie Malcolm Subban each put a hand on Dumba's shoulder as he kneeled for a recording of the American anthem. Nurse and Subban are Black and Dumba is half Filipino.

Dumba's speech and demonstration caught the attention of players in Toronto, at the NHL's Eastern Conference bubble. Toronto Maple Leafs alternate captain Morgan Rielly said that the NHL's response to the Black Lives Matter movement is "an ongoing process" but that Dumba's actions impressed him.

"I think what he did was incredibly powerful and I think he should be very proud," said Rielly. "As players in this league, we just want to give him support and the movement support and be a part of it.

"I think what he did today was outstanding. I think it's important that we realize how brave he was and make sure we give him support and try to fix this."

Dumba wore a "Hockey Diversity Alliance" shirt for the ceremony, which also paid tribute to front-line workers during the COVID-19 pandemic.

Dumba and a handful of other Black hockey players formed the organization in June in the aftermath of the death of George Floyd in policy custody in Minnesota.

"Racism is everywhere, and we need to fight against it," Dumba said. "We will fight against injustice and fight for what is right. I hope this inspires a new generation of hockey players and hockey fans because Black lives matter, Breonna Taylor's life matters. Hockey is a great game, but it could be a whole lot greater, and it starts with all of us."

J.T. Brown, who raised his right fist during the anthem prior to a game in 2017 when with the Tampa Bay Lightning, said on Twitter he applauded "this great start" from Dumba.

"Moving forward, teammates shouldn’t let teammates fight this battle alone," Brown tweeted. "We always show up for each other on the ice, this shouldn’t be any different."

Earlier this week, Colorado Avalanche Nazem Kadri said standing together with Minnesota players prior to an exhibition game was a good sign of solidarity, but he called for more than just gestures.

"We’re trying to make the game more diverse, and the diversity in the game doesn’t happen with racism still going on, so that’s an important thing for us to address," Kadri said. "As players we have addressed that. From a league standpoint, I think we’d maybe like to see a little more acknowledgement and having them address the situation and know that they stand with their players."

A similar ceremony was planned for Saturday night's game between the Montreal Canadiens and Pittsburgh Penguins in Toronto. No players appeared to kneel during anthems prior to the first two games in Toronto.

Social justice has been a theme in sports restarts.

Almost all NBA players have kneeled for the American anthem since the league resumed play Thursday in Orlando, Fla.

Major League Baseball also had players kneeling during its opening games last week, though it was not as big a percentage.

— With files from The Associated Press

Note to readers: This is a corrected story. Incorrect information about Matt Dumba's background appeared in aprevious version.