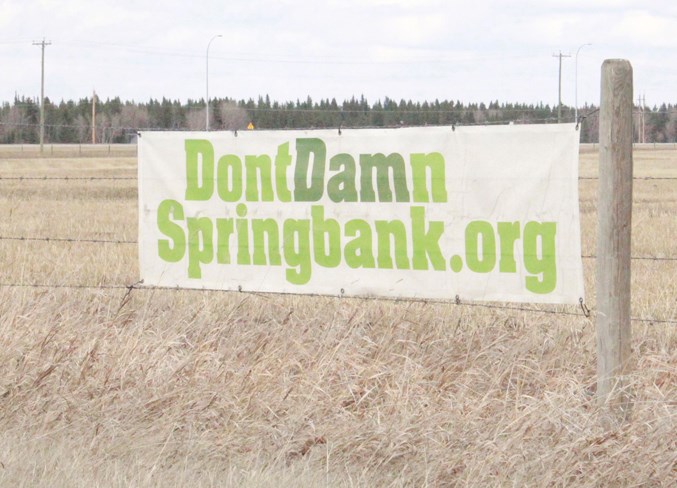 A Don’t Damn Springbank sign along Highway 22 promotes the group’s website. Despite opposition to the Springbank Off-Stream Reservoir, the Alberta government has reaffirmed its commitment to the project, which is now under a one-year regulatory review.

The provincial government reiterated its commitment to the Springbank Off-Stream Reservoir (SR1) with a press conference and press release May 18, despite continued opposition from Rocky View County (RVC) residents. In the press release, the Government of Alberta said the project is now under an expected one-year regulatory review, after the Canadian Environmental Assessment Agency (CEAA) confirmed April 30 the project conforms to the agency’s guidelines. “The reality is the timeline of this review, and other factors, will result in the project being ready ten months later than our earlier prediction,” Transportation Minister Brian Mason said at the May 18 press conference. Mason said the government will take steps to ensure construction can begin as soon as possible while it waits for final regulatory approval. Those steps include pre-qualifying contractors for the required construction, hiring outside counsel from the firm McLennan Ross LLC and additional legal counsel that Mason called “one of the top land acquisition lawyers in the city of Calgary,” and making efforts to acquire land for the project. “The Government of Alberta recognizes the importance of the lands required for (SR1) to the people who currently own it,” Mason said in the province’s press release. “It is our firm intention to deal equitably with these owners and offer fair compensation, and we remain hopeful that we will be able to negotiate an agreement. We do not want to expropriate this land, but we will do what is necessary to protect Calgarians.” Mason added the process of expropriation would be pursued as a last resort if agreements with landowners could not be reached. “In the end, protecting the lives and property of a million Calgarians is the overriding factor here,” he said when pressed on the matter during the press conference. Mason also said the government does not believe a similar project at McLean Creek – often mentioned as an alternative by those opposed to SR1 – would be viable to provide flood mitigation for Calgary from the Elbow River. “In addition to the technical and environmental challenges with McLean Creek – which are significantly higher than SR1 – starting over with that proposal will result in delaying critical flood protection for Calgary by at least an additional two years,” he said. The government hosted two information sessions on SR1 May 22 and 24 in Calgary. Lee Drewry – an impacted landowner and member of the grassroots organization Don’t Damn Springbank, which has been opposing the project since it was announced – attended both sessions and said he was not satisfied concerns were properly addressed. “My impression is it’s a checkbox exercise,” Drewry said. “They can now declare they’ve had two more public engagement activities. The bottom line is, they tell you about the project, but they don’t listen to the concerns – and that’s been the approach since day one. They’re telling, they’re not listening.” Lee said the project’s 10-month delay is not surprising. “I think it’s further evidence that this project just isn’t the slamdunk that the government thought it was going to be four years ago,” he said. Lee also said despite Minister Mason’s comments, Don’t Damn Springbank maintains McLean Creek is the best flood mitigation option – not only for Calgary, but for upstream communities like Bragg Creek, as well. RVC and Tsuut’ina First Nation – both of which have voiced concern about SR1 – did not respond to a request for comments on the Minister’s remarks by press time.