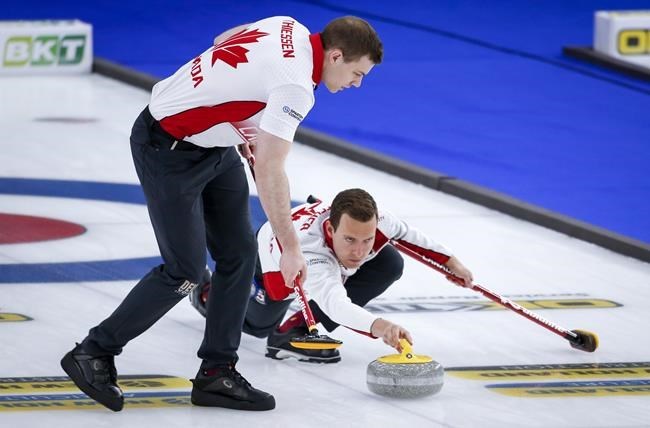 CALGARY — Canada won't play for a medal at this year's men's world curling championship, which was suspended Friday night because of positive tests for the COVID-19 virus.

Shortly after the elimination of the host country from contention, Curling Canada announced Saturday's other playoff game and semifinals are on hold because some participants tested positive for the COVID-19 virus.

Those who tested positive were asymptomatic and didn't involve playoff teams, Curling Canada said in a statement.

But athletes and staff still competing will be tested Saturday. Competition won't resume until results are known.

Medal games are scheduled for Sunday at WinSport's Markin MacPhail Centre, where the Canadian men's, women's and mixed doubles championships were held without a positive test for the virus.

Participants quarantine and are tested upon arrival before competing, and are confined to the arena and their hotel in Calgary's curling bubble.

The Scots advanced to the semifinals to face either Sweden or Russia.

Canada was outcurled by Scotland at every position Friday, so the host country wasn't able to set up for a multi-point end.

"We're playing one of the top teams in the world and we lost and the consequence of that is we're not going to be playing for a medal," Bottcher said. "It just didn't happen for us this week.

"I feel if we could start the week over today, there would be a dozen things we would do, a little tweak here, a little tweak there, to get a few more wins along the way and that would go a long way in a lot of ways, to get us on the podium."

Bottcher, third Darren Moulding, second Brad Thiessen and lead Karrick Martin from Edmonton posted a 9-4 record in the preliminary round, and advanced to the playoffs in their first world championship appearance.

But Canada finished off the podium for just the eighth time in 62 years of the men's world championship, and for the first time since 2014.

The United States and Switzerland were scheduled to meet in another playoff game Saturday morning with the victor advancing to the semifinals later in the day.

Canada had won five of the previous 10 world men's curling titles and reached the final in another three.

Last year's championship in Glasgow, Scotland, was cancelled because of the COVID-19 pandemic.

Brad Gushue of St. John's, N.L. was the last Canadian team to win men's world championship gold in 2017 in Edmonton.

But as was the case when Canada was held off the Olympic podium in men's and women's team curling for the first time in 2018, no medal for Bottcher in Calgary is a reminder that the world has caught up in a sport that Canada once dominated.

While the Scots, Swedes, Swiss and Americans were expected to contend in Calgary, Russia's ascension was unexpected after Sergey Glukhov went 4-8 in Lethbridge two years ago.

Canada was beaten by both Russia and South Korea for the first time at the men's world championship.

"Anyone that thinks that Canada is going to come into these kind of events and just steamroll their way through to the podium really hasn't been watching that much curling in the last decade," Bottcher said.

"There are a lot of really good teams here. Even the teams that finished at the bottom of the standings, they were just as likely to knock you off if you played your 'B' game.

Sweden's Niklas Edin, who is chasing a third straight world title, and Russia's Gluhkov topped the table at 11-2 for byes to the semifinals.

The Scots wore black armbands in memory of Prince Philip, whose death at age 99 was announced Friday by the Royal Family. He was president of the Royal Caledonian Curling Club in 1964-65.

Glukhov's official team name at the world championship is Russian Curling Federation because of World Anti-Doping Agency sanctions against that country.

The top six countries at 2021 BKT Tires and OK Tire Men's World Curling Championship also qualified their countries to compete in men's curling in next year's Winter Olympics in Beijing.

This report by The Canadian Press was first published April 9, 2021.

Alberta leads Prairie provinces in accepting COVID vaccine bookings for pre-teens
May 10, 2021 2:00 AM