Westlock County’s Tuxedo Farms has the newest facility in the province
Mar 14, 2021 3:45 PM By: Andreea Resmerita 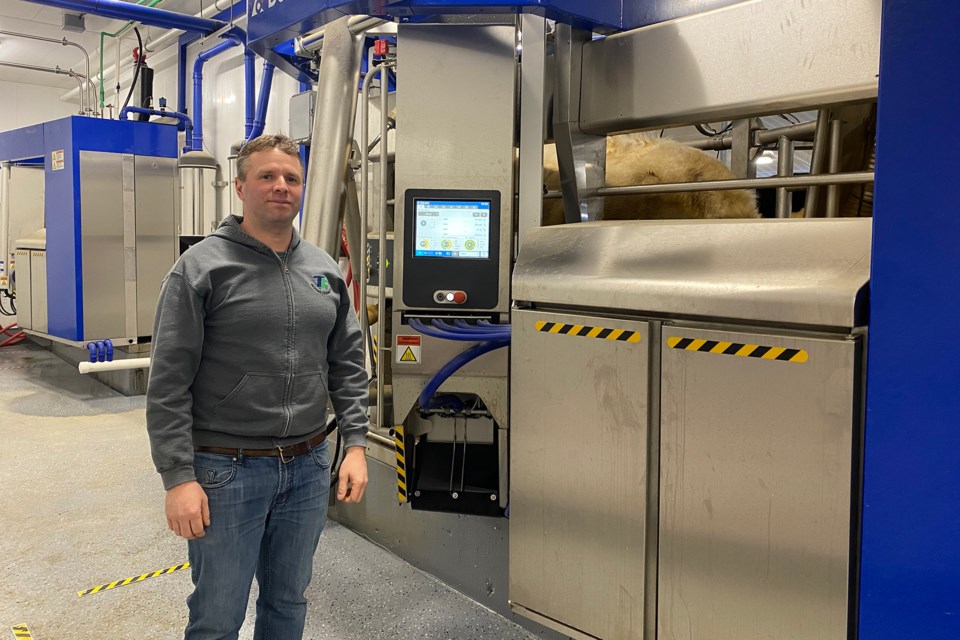 Nelson Jespersen, who owns Tuxedo Farms, installed five Swedish DeLaval robots at his dairy farm. The entire process is automated to suit each individual cow, and the control panel to his right holds real-time information collected by each robot.Andreea Resmerita/Westlock News

WESTLOCK — At Tuxedo Farms in Westlock County, cows dictate when they want to get milked and robots swing the gates for them.

Nelson Jespersen spent 15 years researching robotic dairy farms, and in late February, he finished setting up one of those systems at his farm 10 minutes northeast of the Town of Westlock.

He says he’s “by no means a pioneer;” there are at least three other robotic farms in the county and about 100 in the province. His is the newest operation, where he has set up five Swedish robots.

“We kind of like to see what other guys do first and then compile all that information and come up with our own plan,” Jespersen said.

He gave the News a tour of his facility March 4, in the new barn he built to accommodate the robotic farm, which he can also control from his phone.

The barn is set up so that any one of his 270 cows has to travel from her sleeping area to the food through the milking sorter: it’s a one-way road.

Each cow wears a tracking device — a transponder — around her neck that stores all kinds of information about her, including how many times she has been milked in a particular day, what her expected yield is, and a whole slew of testing that’s done on the spot.

The tracking device is scanned, and one of two doors opens depending on all that information the robot holds. She can either get in line for milking, or go straight to the food.

Once she’s in the milking booth, a robot fitted with a small camera cleans the udder, then attaches each one of the four teat cups. The whole operation is timed so the cow is primed for milking: it’s exactly 45 seconds between cleaning and attaching the teat cups. 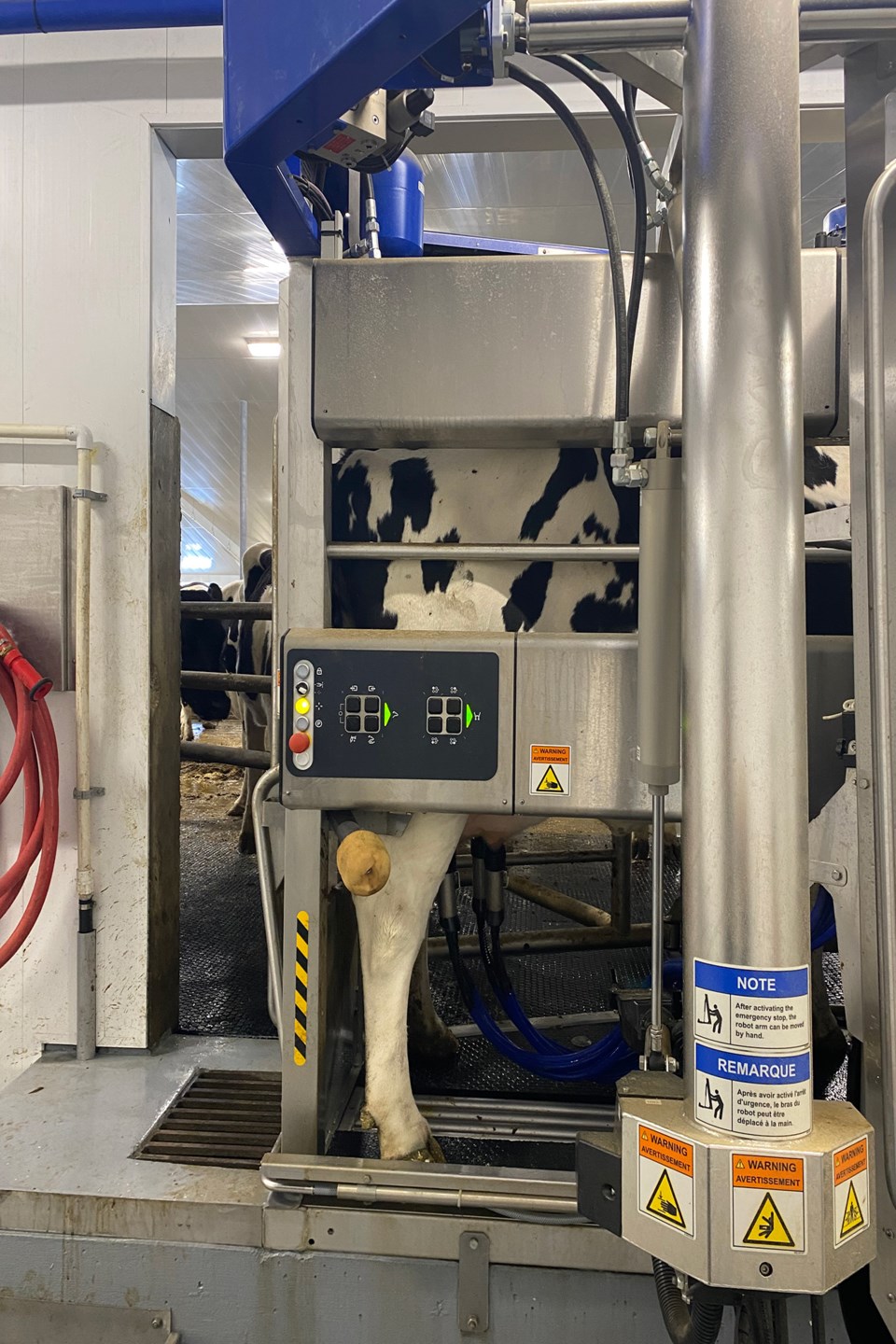 The robotic arm attaches the teat cups individually after cleaning the udder, a process that takes exactly 45 seconds. . By Andreea Resmerita/Westlock News

There’s an incentive to follow that process — apart from the food, — little molasses pellets that get dispensed (not randomly, but based on the cow’s weight, age, milk yield) while the milking is going on.

Inside each robot, there’s a mini-lab that tests the milk in real time for mastitis or metabolic issues. Ultimately, the cow gets to the food, but if the robot detects something is off, she’ll be sent to a different pen so Jespersen’s workers can get to her easily.

"We used to milk in a parlor, and we’d milk twice a day, at four in the morning and the guys would leave the barn at about eight at night. So it was early morning, long days. With a robot farm, the cows can milk voluntarily. So they can come into the robot whenever they want,” Jespersen said.

“It’s better for the cow, in our view, that they can go get milked and then go get feed, water and lay down, instead of being in a parlor where they’d be waiting for an hour with 100 other cows in a big holding pen. We kind of wanted to get away from that and do what was ultimately better for the cow.”

It’s not a difficult equation: the more you can increase a cow’s access to milking, the higher your milk production.

At Jespersen’s farm, efficiency ultimately revolves around the cows themselves: what are their needs, and how are they best served? Stability, he says, is a very important thing for cow health and this entire system that’s built around a cow’s movements is much better suited to accommodate that.

On average, his robot tells him, his cows visit the robot 2.6 times per day, already up from the previous schedule in the old barn. Production is also up 3-4 kilograms of milk per cow per day, although he’d like to see that increase.

“It’s not about cow numbers, it’s about cow efficiency,” he says.

For example, fresh cows, meaning the ones who’ve just had calves, need a lot more milking — about five times per day — in order to be comfortable. Right now, one of the five robots at Tuxedo Farms is for fresh cows only.

“That’s the difference between this barn and our old one. They were limited in how much milk we could relieve them of. With this system, we can let them come in infinitely.”

On the other hand, some cows might only need to be milked once per day, and all of that can be decided using the robot.

“We’re really customizing how much each cow gets milk,” he said. It’s called a “guided traffic farm,” since the entire flow can be customized specifically to each cow. 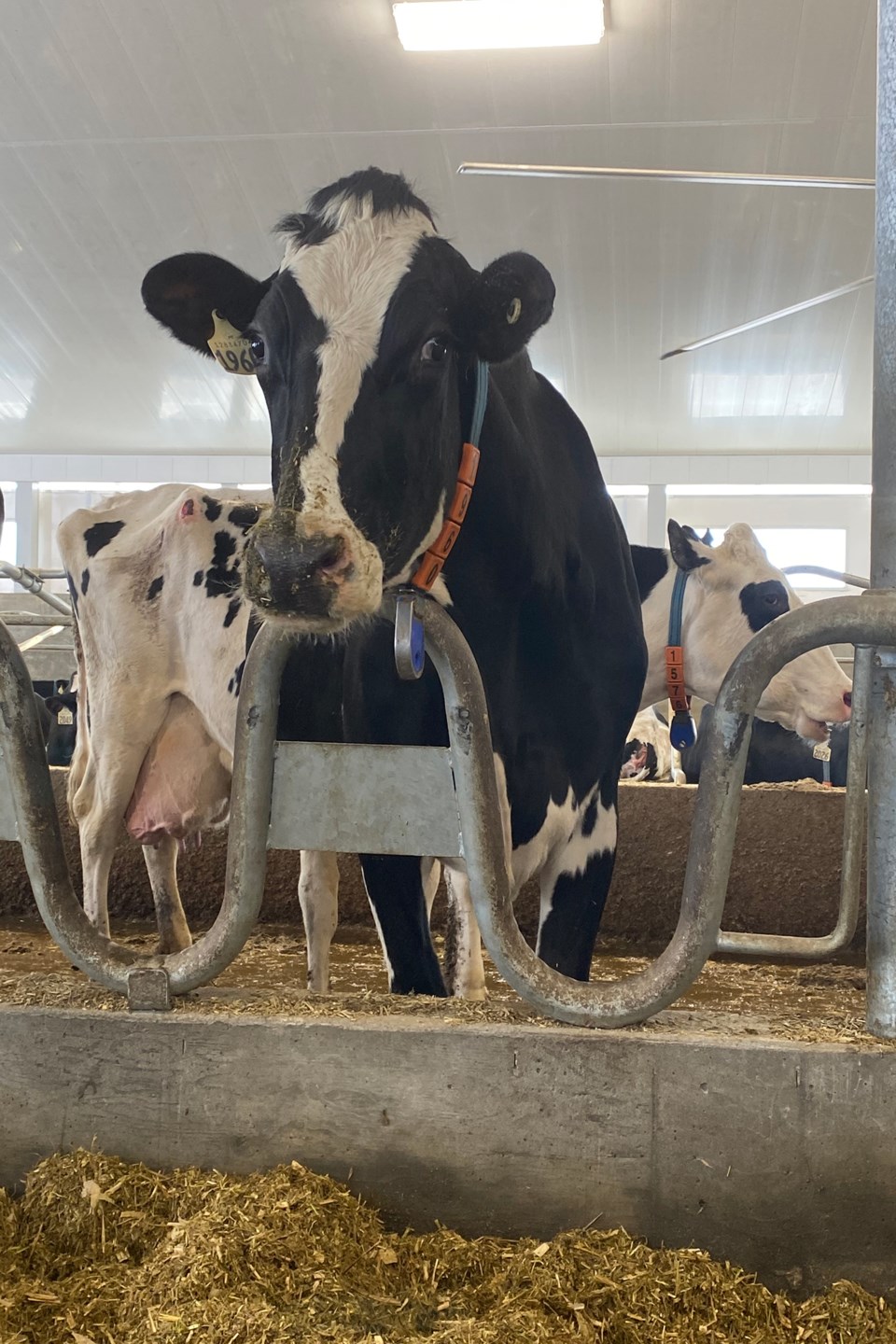 The blue transponder around this cow’s neck is the key to her whole circuit through the barn to get to the food. By Andreea Resmerita/Westlock News

Generally, companies that produce these robots like to say they make farms more efficient with fewer labour costs, and that’s true of most places. Jespersen said his intention wasn’t to get rid of labour.

He’s also in a different position from other farmers who had a difficult time during the pandemic accessing foreign labour. His workers are all settled and permanent residents.

While the claims that automation could save the Canadian dairy farm might hold true, it’s not for labour access reasons alone: it’s really about the cow.