“And also lots of my coworkers, they’re looking up to me, working with me and they also feel really good that even though we work in any part of the country McDonald’s recognizes people, they see it, all the hard work and effort we put in.”
Dec 15, 2020 2:15 PM By: Remy Greer 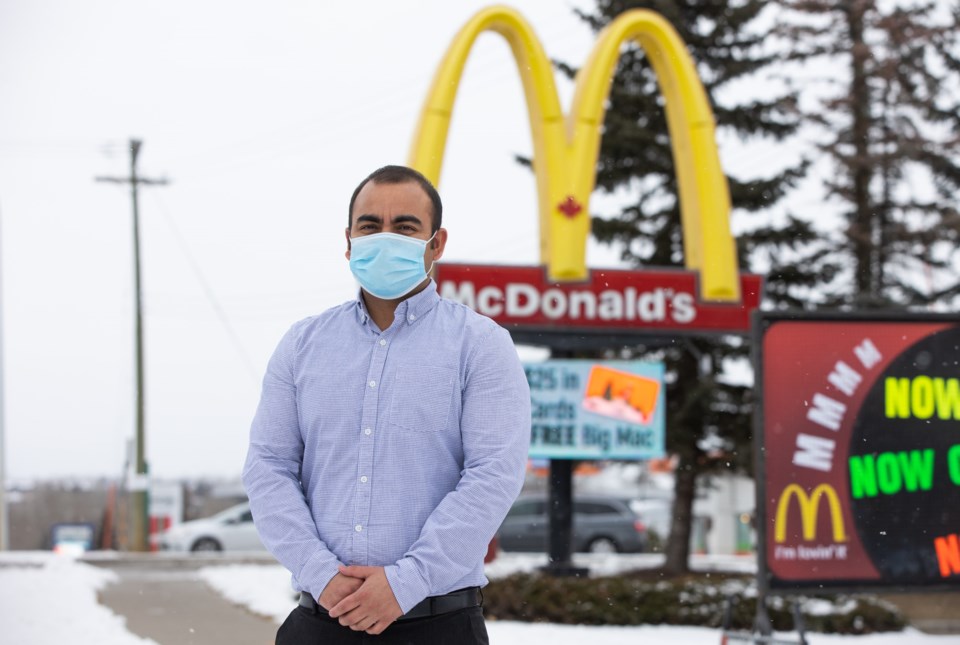 Okotokian Yogendra Khatri, manager of the Okotoks McDonald's on Big Rock Lane, was recognized by the company for his 18 years of hard work, 11 of which have been in Canada as one of the 2020 Outstanding Manager of the Year Award winners. (Brent Calver/Western Wheel)

An Okotoks manager has been recognized as one of the top in the country 11 years after moving to Okotoks.

Okotoks resident Yogendra Khatri has been named one of the winners of the 2020 Outstanding Manager of the Year Award by McDonald’s in recognition of 18 years of hard work and dedication to the company that has seen him move around the world.

“It was very surprising for me,” said Khatri, the manager of Okotoks’ Big Rock Lane McDonald’s. “What I’ve felt is the hard work and the number of years I’ve spent with McDonald’s it really paid off and McDonald’s sees it even though I’m working in a small town. It’s a privilege for me to get this and get recognized.

“And also lots of my co-workers, they’re looking up to me, working with me and they also feel really good that even though we work in any part of the country McDonald’s recognizes people, they see it, all the hard work and effort we put in.”

Born in Nepal, Khatri moved to the United Arab Emirates and worked at McDonald’s in Dubai for seven years before coming to Okotoks in 2009 as a temporary foreign worker.

“When I was in Dubai I got to know that Okotoks was hiring so I applied and was selected to come here,” he said. “When I was working here we started the process for my permanent residence and I got that while working at McDonald’s.”

Khatri said there certainly was some culture shock upon arrival in southern Alberta, though the climate of Nepal prepared him for the Canadian winter.

“In Nepal it’s pretty similar the weather I used to have, but then I spent six, seven years in Dubai where it’s super hot,” he said. “I moved to Okotoks and it was super cold so the first year was pretty tough to adjust, but the owners, my co-workers, friends, helped me understand the culture here, people here and I got involved with the community.

“It was a quick adjustment for me.”

Nine years after first arriving in the Foothills, Khatri became a proud Canadian citizen in 2018.

“That was a really proud moment for me and my family and all of my friends,” said Khatri, who has resided in Okotoks with his wife and family since moving to Canada. “We know lots of people who’ve come as temporary foreign workers – even here in Okotoks – and I also know lots of people from when I was working in Dubai and my family and relatives in several other countries.

“I was super excited and happy about it, but also all of my friends, families, our owner, my co-workers, they were all very happy that I got that opportunity.”

He rose through the ranks at the Big Rock location, starting as a crew person, assistant manager before landing on his current role.

The top managers are nominated annually by regional management and franchisees for candidates who fit the bill in recognition of hard work, dedication and commitment to McDonald’s and its customers.

The Outstanding Manager of the Year Award goes to the top 10 per cent of managers from the 1,400 restaurant locations in Canada.

“Yogendra always goes above and beyond to make sure his restaurant operates at a high level of service, cleanliness and food quality,” said Mike Shaw, local McDonald’s franchisee, in a press release. “Yogendra truly leads by example, which directly translates into excellent guest experience. He is very deserving of this prestigious award.”

On top of achieving outstanding results in sales, client satisfaction, employee training and co-ordination of local marketing programs, Khatri navigated the restaurant swiftly to adapt to the pandemic.

“It was like a roller-coaster for us when this thing started,” he said. “There was lots of things we needed to adapt, we needed to deal with the new policies and procedures and supporting all the employees with the McDonald’s standards of safety for the employees and also for the guests visiting our restaurant.

“At the beginning we had to educate ourselves and adapt, but now we’re pretty used to it by doing it for such a long time.”

About the Author: Remy Greer

Remy Greer is the assistant editor and sports reporter for Okotokstoday.ca and the Western Wheel newspaper. For story tips contact rgreer@okotoks.greatwest.ca
Read more